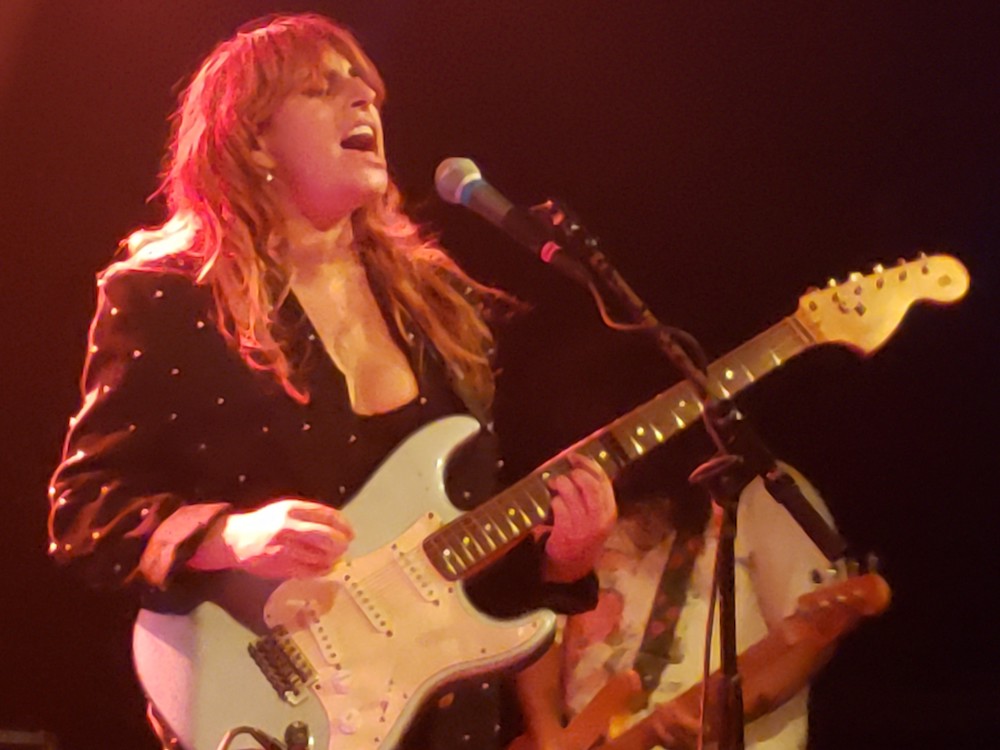 Mannequin Pussy at the Music Hall of Williamsburg / October 28, 2021

Perhaps not by choice, Mannequin Pussy has had to reinvent itself periodically over the past 11 years. Formed as a duo in 2010 in Philadelphia, Pennsylvania, the band gradually grew in number. A recent personnel change, though, left vocalist/guitarist Marisa “Missy” Dabice as the sole founding member in the band. Mannequin Pussy is now Dabice, bassist Colins “Bear” Regisford, and drummer Kaleen Reading, with the use of additional musicians for live performances.

At the Music Hall of Williamsburg on October 28, Mannequin Pussy concentrated on newer material, performing three out of the five songs from the Perfect EP, released on May 21, plus nine songs from the most recent album, 2019’s Patience, and eight songs from the earlier years. Mannequin Pussy performed on instruments borrowed from the two support acts because a few days earlier thieves stole the touring van with its attached U-Haul trailer. Even after the loss of more than $50,000 worth of equipment, the tour soldiered on.

Aided by guitarist Max Steen and keyboardist Carolyn Haynes, Mannequin Pussy performed the rawest rock and roll imaginable. Brash and boisterous, the music conflated the core aspects of garage rock and punk with pop melodies. The lyrics, meanwhile, often explored the more vulnerable range of human emotions. This was a rather unusual pairing.

Dabice frequently sang sweetly on verses and then growled her choruses from deep in her gut. Her stage movements followed similar patterns, sometime reserved and sometimes thrashing across the stage. Even when a listener could not hear the lyrics, one could feel them, as Dabice’s emotionally charged delivery was massively expressive and even explosive. The band assisted by building crescendos.

The set ended with Bear singing his first song with Mannequin Pussy, “Pigs is Pigs.” This was Bear’s time to remove his bass and thrash wildly as he sang. A social commentary, “Pigs is Pigs” reflects on police brutality against people of color. After an hour of intense in-your-face rock and roll, Mannequin Pussy left the audience with a message to chew on.