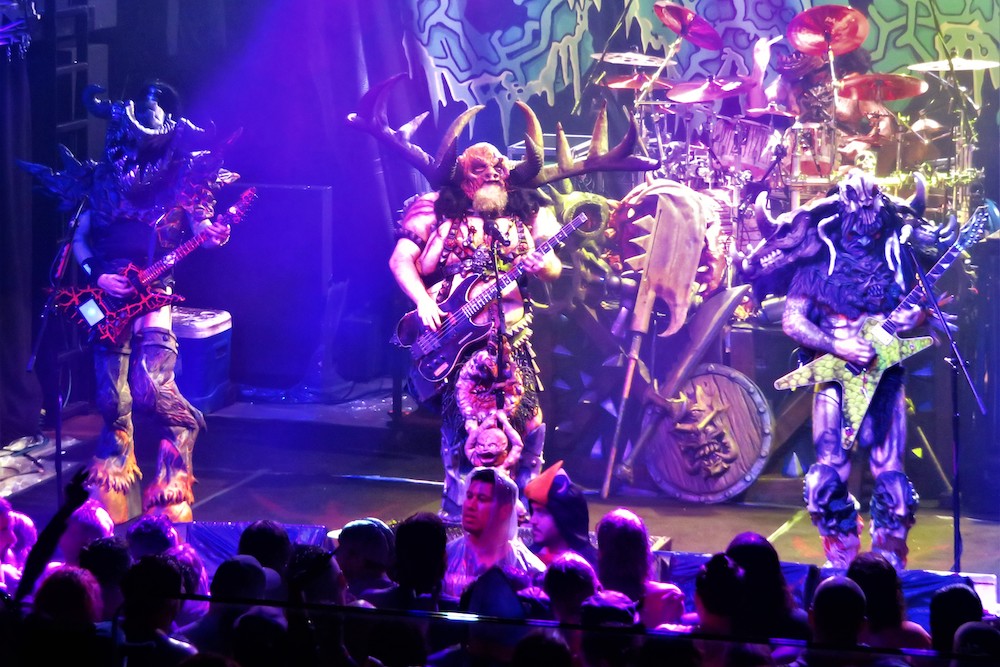 A Gwar concert is always a special event, but especially on Halloween. While many attendees came wearing disguises, nothing beat the costumes on stage at Irving Plaza. Fortunately, no one in the audience came prepared to spray liquids like Gwar did so copiously each time the cast decapitated, amputated or mutilated a body part of its many characters.

For the uninitiated, the barbaric intergalactic warriors in Gwar form a heavy metal band based in Richmond, Virginia. Gwar is a flexible ensemble, with no remaining members from its original 1984 cast. At Irving Plaza, the main characters included vocalist Berserker Blothar, lead guitarist Pustulus Maximus, rhythm guitarist Balsac the Jaws of Death, and drummer Jizmak da Gusha. Bassist Beefcake the Mighty did not perform that night, so Balsac switched to bass on some songs. Throughout the evening, the stage show included numerous other characters, most of whom became victims of bloody violence.

Plastic covered the stage monitors and much of the audience floor near the stage. In front of the stage, a few fans wore slickers. Others came in white t-shirts, eager to get slimed by the band and leave with a badge of honor – a thoroughly-soaked t-shirt, now red and blue, the primary colors of the simulated body fluids that the characters frequently sprayed into the audience. Many in the audience who distanced themselves, trying to avoiding the mess, were splashed anyway, as the liquids repeatedly projected far into the room for lengthy periods of time.

Gwar’s concert celebrated the 30th anniversary of its pivotal album, Scumdogs of the Universe. The bulk of the concert’s repertoire, 10 out of 14 songs, originated from that album. Three decades later, the vocals were coarser, the music heavier, and the theatrics wilder. The team also updated the visuals to include a gruesome assassination of President Joe Biden, the seventh sitting president to receive the Gwar treatment in a skit.

One part of the presentation may need to be reconsidered, however. In one scene, a woman with impossibly huge breasts comes on stage and becomes the main character. After some banter, her breasts are chopped off, and once again the audience was splattered with gallons of “blood.” Especially in this age, sexual violence against women should not be acceptable spectacle.

If the show had a cohesive storyboard, it was difficult to discern. Frankly, who cared about plot lines? The audience was there for the searing heavy metal, the satirical toilet-humor songs, the grotesque costumes, and the outrageous gore. Gwar amply provided all of the above.