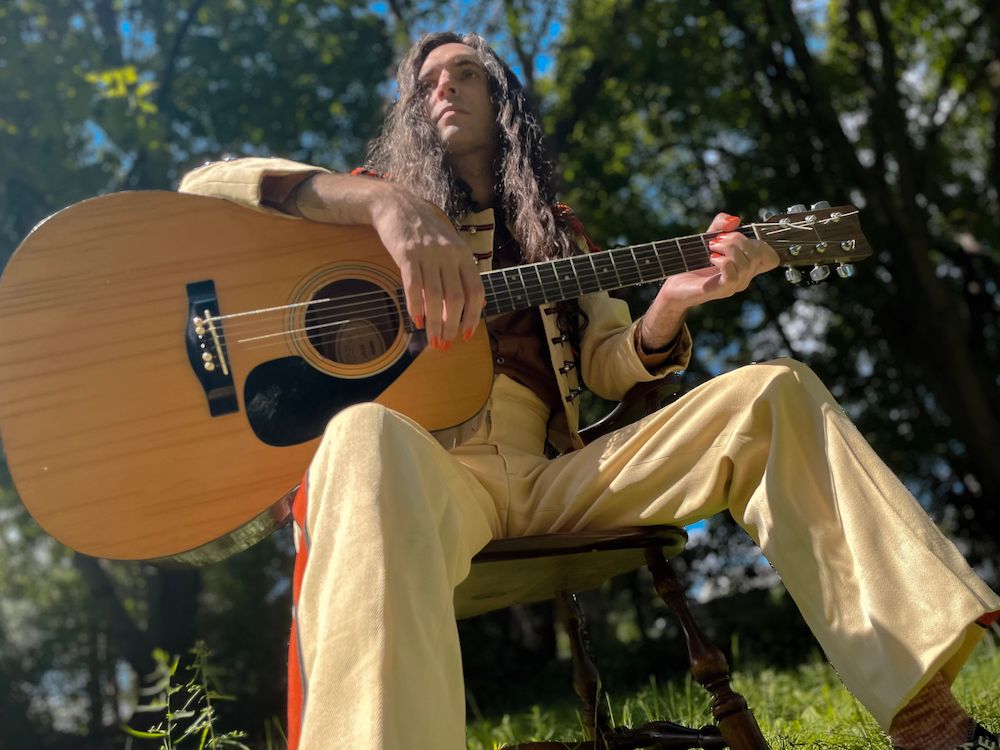 A new record, a global pandemic, a change in perspective on Weezer, and a once flourishing DIY scene shapes House on Stilts and much more of one New England singer-songwriter’s career – one we got to personally talk about.

Allow me to introduce Nathan Leigh, a 37 year old multi-instrumentalist from western Massachusetts with a wide array of talents. Frontman of The Crisis Actors, not only can he play 11 instruments, but he also has an affinity for stop-motion.

“I grew up watching those claymation movies, but it was always something I was interested in and eventually dabbled in,” he said. “I bonded with a really great friend in college over the fact we were big [Ray] Harryhausen fans. We loved this, and knew we had to do it.”

Leigh’s new visual EP, House on Stilts, is a stop-motion piece. This music video is a project 10 years in the making, but it is not his first foray into the medium. A short narrative about a little red wind-up bird building a cozy house out of Lincoln Logs and shoelaces is the title track. Even though his face doesn’t move, Leigh makes him emotive and proud of his humble abode. Once the house is built, our protagonist tosses and turns in his little bed, restless and listing all the things keeping him awake at night. The list, on a roll of receipt paper, starts small, but grows and grows. A perfect pairing to “The Overwhelmed Song.” Bird is given a list of authors to read and a pile of books that should’ve already been read.

“I’m really into found objects,” Nathan explains of Bird. “I knew from the beginning I wanted it to be a wind-up bird and spent a couple years poking around antique shops and thrift stores. I don’t remember where I was, but once I found it, it was a moment of relief.”

To cope with his anxiety, we see Bird turn to CraigsNest and attend an open mic night with a keyboard – and the powdered wigged attendees dismiss him. Dismayed, Bird turns to the forums and sees a message of inspiration. The chorus to the third song “More of a Callout Post than A Song Really,” reminds us, and Bird, “Just when you think of giving up, that’s when you can’t give up.” Bird returns, tries again, and becomes a welcomed member of this scene. Bird’s persistence inspires Duck, another secluded soul.

The song “House on Stilts” came to Nathan almost a decade ago. After driving all night from a gig, he was feeling overwhelmed and sat down on a bench overlooking water somewhere in Florida. “There’s this moment about two weeks in [on tour] where you start to question why you’re doing it, and the following week you hit your stride and then it’s all gravy from there,” he said. “I was burnt out, miserable, and broke.” He sat and looked at the view of stilted houses over the shimmering water, and was calmed by the beauty. “It struck me as something I didn’t know I wanted. I wrote the song right there on the spot.”

The attention to detail in House on Stilts is extraordinary. Above Bird’s bed are posters of his bird-ified idols, including Freddie Birdcury, David Birdie, and Bird Prince. “Thank you for using their proper names,” exclaims Leigh with a laugh. “It’s hard to tell you how long it took to make that. It’s a little embarrassing. A lot of work went into that dumb visual gag.”

No, Nathan, quite the opposite. It’s not dumb. That attention to detail is appreciated.

Leigh started with clarinet in middle school band. Nathan’s first instrument that he took to was guitar, but once he hit a peak with it, tried the bass. “That’s how I got shoved into playing tuba in the band because I played bass, I could read bass clef.” From there, those instruments just kept multiplying. Add piano, violin, drums, Dulcimer, harmonica, mandolin, and his grandfather’s accordion. “[Accordion] is a hard instrument, despite its reputation as ‘uncool.’ It’s physically demanding.”

Like Nathan’s music, he himself does not stick to one place. He is from Massachusetts originally, but moved around a lot as a child. He has called several places home, including NYC, but his coolest residence was a 40-year old sailboat for three years. (“One of those life experiences I wouldn’t trade for anything.”) However, it was unviable to sustain because of a fairly serious lung condition he developed.

The COVID-19 pandemic affected Nathan Leigh in multiple ways. First, he had to relocate from New York and moved back home. Additionally, he and his band had secured a residency at a venue just before the pandemic hit and that venue has since been shuttered. “We had a lot of momentum; we were gearing up for a tour, getting ready to release this album, and all that stopped.”

The final song on this EP, “Care Workers Nocturne,” is not included in the music video, but it is just as special as the rest of it. A friend who worked as an ER doctor asked him to write her a song to keep her spirits up during the height of the pandemic. “I really struggled with it because I didn’t know what to say.” He doesn’t have to say a word. “Care Workers Nocturne” is an instrumental melody; a sweet, simple, and bright tune that ends with real birds chirping from outside his window. The message is clear: Hope. “Spring still shows up even when your world is dark,” Leigh noted.

“More of a Callout Post than a Song Really” is the third track on the visual EP, where Bird is gaining his confidence back. It stems from an upheaval in the DIY scene during summer 2017. A summer filled with Nazi trolls infiltrating DIY websites to get underground shows shut down, problematic personalities being expelled, and more. So, who exactly is he calling out? Well, the whole scene, including himself. “There was a lot of posturing, gatekeeping, and purity testing then. I was gearing up for tour right as this was happening. I’m looking at this situation in my community and realized, ‘This is all our house. Messy as it is, we have to own the messiness.’”

He wrote that song in the first few days of his tour. Nervous about alienating people, Nathan almost didn’t play it. But surely enough, fans broke out into laughter with the first line. “Great, we’re on the same page here about how silly and trivial all this conflict is and also how incredibly important it is simultaneously. It went from a song I was terrified of playing to what I open most of my shows with.” Being able to laugh at oneself is a sign of humility, and Nathan surely is that.

From his humble beginnings in the punk scene to acquiring a taste for Peter Gabriel-era Genesis, Leigh is always looking for new musical ideas. “The worst thing you can do as an artist is get stagnant and myopic,” Nathan warned. Then he paused. “When did Weezer get bad for you?” After we joked about Weezer and River Cuomo, Nathan continued with, “Rivers has said in interviews he doesn’t listen to anyone else. Top 40 Radio for inspiration, but that’s it. That’s why Van Weezer was refreshing; hearing him nostalgic about music he grew up with. You can only photocopy a photocopy so many times.”

Unfortunately, Nathan and the Crisis Actors don’t have any upcoming shows because of the ongoing pandemic. But what’s his favorite place to play? “Indianapolis. Really amazing DIY scene out there. But New York City still has a big part of my heart.”

In the meantime, Nathan already has eyes on his next project: a remix record of previously released songs. For that release, he is also coding a pixel-art game to pair with one of the songs. I interrupted him while he was coding when I called. “I have a very short attention span and like learning new things, so anytime there’s an opportunity or project that calls for some skill that I don’t necessarily have, I relish the opportunity to dig in and learn new stuff.”

Nathan Leigh is this and more: a genuinely human multi-instrumentalist, a multimedia artist, and an all-encompassing creative.

NATHAN LEIGH AND THE CRISIS ACTORS’ EP, HOUSE ON STILTS, IS AVAILABLE FOR PURCHASE OR STREAMING ON BANDCAMP, AS WELL AS ALL OTHER DSPS!