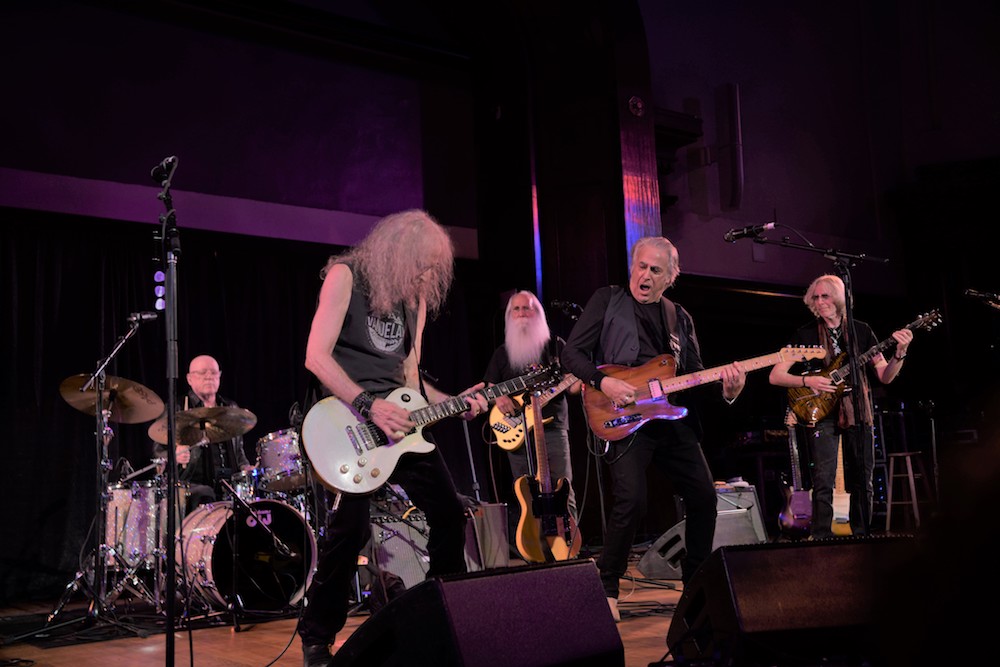 Talk about legends who provided the soundtrack of the seventies and you get the members of the Immediate Family – all of who who played Adler Hall on the Upper West Side in a manner that felt like a meeting at rock church.

Sitting in the pews, the night took on spiritual overtones as the band banged out hit after hit from the alter. Drummer Russ Kunkel’s steady beats, Leland Sklar deep in the pocket bass playing, and the orchestral wail of the three guitarists played off the natural acoustics of the Hall’s high-curved ceilings to make a heavenly mix of laid-back rock.

Danny “Kootch” Korthchmar, Steve Postell, and Waddy Wachtel’s triple threat of Telecasters, Paul Reed Smith, and Les Paul’s covered all the tones of the seventies and eighties that you’d expect from a posse of guitar-slinging outlaws. Bassist Sklar rounded out the bottom end as he locked into Kunkel’s straight ahead (and tasty) drumming to make a rhythmic machine of muscle and finesse that left plenty of room for the guitarists to work their own magic on.

Opening with “Fair Warning” from their self-titled new album, The Immediate Family quickly got down to business on the rock end – and did not hold back. “Turn It Up to Ten” was next… and another that was played off of the Hall’s natural acoustics. It got the sound just right and perfectly in time for the monster hits that followed – starting with Don Henley’s “Dirty Laundry” that was co-written by Kortchmar.

Waddy Wachtel played the keyboard parts on his guitar nicely, sucking out some of the dated eighties synth sounds of the original and replacing it with something grungier. Kootch supplied the vocals and a nice stinging lead in the middle section as Kunkel humanized the mechanical beats of the original. Sklar’s rock lockdown to Kunkel’s four-on-the-floor playing created the foundation these gents are known for and the reason they were called The Section back in the seventies playing on albums as diverse as Linda Ronstadt, Carole King, Jackson Browne, and James Taylor (to name a few).

Queens native Waddy Watchtel – who was a member of Warren Zevon’s backup band, as well as Keith Richards’ Expensive Winos – sang a spirited version of the song he co-wrote with Zevon, “Lawyers, Guns and Money.” He declared from the stage, “We’re a cover band that plays original material,” adding some comic relief to the night’s serious rockin’ out. Then he summoned up the snarky spirit of an excitable boy and introduced “Things to Do in Denver When You’re Dead” as another tune he wrote on the road with Zevon with members of the Everly Brothers’ backup band.

On “New York Minute,” Steve Postrell sang lead vocals, adding some humility to the eighties-style version from the End of the Innocence album that Henley originally sang on as a detached and stone-faced loner. [Author’s Note: For an updated version of this number check out the Immediate Family’s excellent video below.]

Things got funky as Kootch dared the crowd to get up and dance for the Henley co-written track that was a heavily rotated MTV hit of the times: “All She Wants to Do is Dance.” And we did. And they did. Zevon’s “Werewolves of London” was the set closer that still had the crowd howling from their pews at the end of the regular set.

Opening act Willie Nile joined the band onstage for the encore, paying tribute to the man who was entertaining a crowd just 10 blocks north at a sold-out show at the Beacon Theatre with a blistering version of Bob Dylan’s “Blowin’ in the Wind.” This was a song and version that The Immediate Family added some downtown grit to, which turned the folky number into a punky one that would have served uptown Bob very, very well.