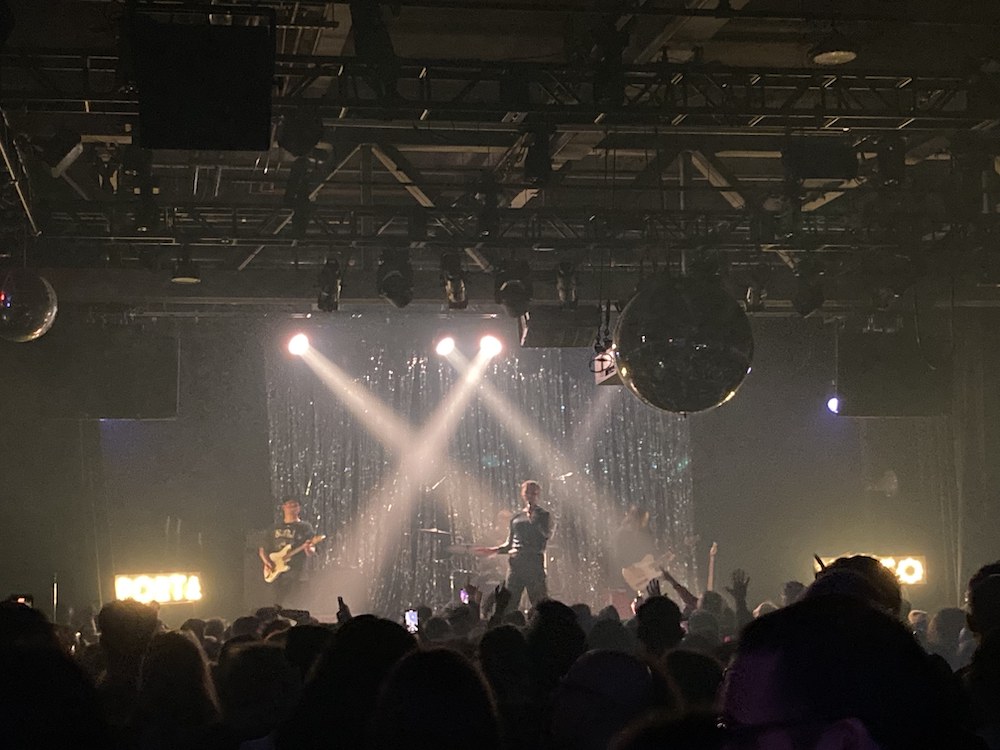 Vulnerable best describes the emotional sold out performance that The Drums put on to celebrate 10 years since their release of one of indie pop’s masterpieces, Portamento.

Much has changed for The Drums since that album, which was their sophomore release in 2011, as the band has largely become a solo effort by frontman Jonny Pierce. Although, instead of struggling to take on the weight of the band by himself, Pierce has only become a stronger songwriter – and an overall more open artist. The Drums are not some fragile band afraid to be questioned, today they are a powerful one because of how vulnerable Pierce allows himself to be.

Growing up, Pierce wasn’t able to be so open and was forced to be guarded. His parents were two ultra-conservative Pentecostal pastors who were homophobic and abusive. Now openly gay, the frontman isn’t afraid to talk about who he is and how he feels. Pierce has found solace in letting his guard down, not afraid to cover up who he is. There’s a connectedness among fans and Pierce that isn’t always found, especially in the way it is here. There is no facade and there is no barrier. Pierce can be who he is and the fans can be who they are.

After two fantastic openers, Liam Benzvi and Ekkstacy (the latter of the two solo acts had released a single earlier this year featuring The Drums), the curtains had been closed in order to set the stage for The Drums. It was exciting, as the band hasn’t performed live in front of an audience in two years until that night. Finally, the curtains drew open revealing two light up signs spelling “PORTA” – “MENTO” flanking the stage with the full album title as a backdrop with sparkly silver fringe curtains on either side.

The show began with audio of an interview with Pierce and former member Jacob Graham that took place back in 2011 when Portamento had just been released. It was an unorthodox way to start, though at the same time it felt very on brand.

The touring members of The Drums first came on stage, then ensued Pierce sporting a blazer and some spectacular, shiny red gloves. Everyone went wild. The band began their set with “Book of Revelation,” the first song off the album, and it was electrifying. From that point on there wasn’t a moment where the crowd wasn’t singing along with Pierce.

Playing through the whole track list of Portamento allowed for what Pierce called “virgin” songs to be played live for the first time, such as “I Don’t Know How to Love,” “Please Don’t Leave,” and “In the Cold.” These songs sounded incredible and people were obsessed with them – especially “I Don’t Know How to Love,” where from the moment the iconic surf rock guitar/bass combo (that early Drums were known for) kicked in, the crowd was ready to explode in a sing-along with Jonny. There was a very noticeable smile on his face right from the first verse.

It would be regretful to not mention Jonny Pierce’s incredible, almost hypnotic dance moves while on stage. The way in which he moves is almost reminiscent of some classic, dramatic movie villain… without the evil, of course.

During the encore, The Drums played some tracks off of their self-titled album, starting with “Down by the Water.” Just wow. The crowd screaming along to the two phrase chorus “If you fall asleep down by the water / Baby, I’ll carry you all the way home” created an ethereal moment. At one point during the set Pierce thanked the crowd, saying that a lot of bands claim they have the best fans, “but they haven’t been to a Drums show.”

Back in the same interview that the show began with, Pierce said that Portamento was the first record that he began with a more realistic style of writing and without any fantasy. Since then, he’s come a long way in sharing his vulnerability through his art. It is so encouraging and sweet to see the joy that comes from Pierce revisiting a fan-favorite album 10 years on while breathing new life into it. It was incredibly lucky for us to have been able to celebrate the album’s anniversary in person and to sing along with Pierce and the band.