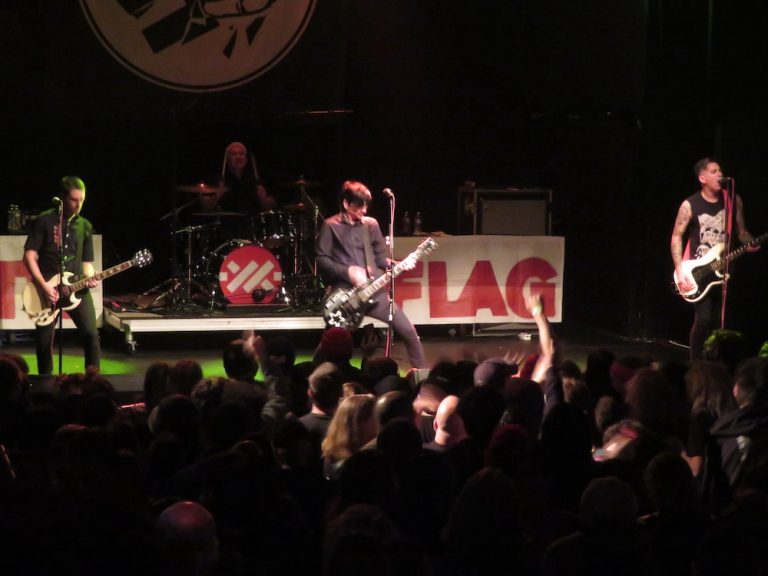 Anti-Flag does not sing love songs. Surely the musicians have treasured their experiences of love on a personal level, but sentimentality is not something they put on public display. Instead, Anti-Flag matches blazing punk rock with commentary on the mechanics of war, capitalism, fascism, racism, political corruption, police brutality, and other controversial matters.

Anti-Flag formed in 1988 in Pittsburgh, Pennsylvania, so the band has been on a mission longer than the life-span so far of many of the musicians in the 2021 tour’s opening bands, women-led Doll Skin and Bad Cop/Bad Cop. Following several personnel changes, Anti-Flag’s current line-up solidified in 1997, with vocalist/guitarist Justin Sane, guitarist Chris Head, bassist Chris Barker (a.k.a. Chris #2), and drummer Pat Thetic. Anti-Flag has stirred a social consciousness among its rebel followers through seven presidencies.

Hardly a year passes without an Anti-Flag concert tour, yet the COVID pandemic aborted the band’s 2020 tour after only two shows. For the rescheduled 2021 dates, the band did not necessarily dwell on its 2020 release, 20/20 Vision, a collection of new songs that focused on themes of anti-fascism and political optimism in the face of distressing circumstances. That album’s lyrics encouraged its audience to organize and work towards a better future, and this was the rallying optimism that pervaded Anti-Flag’s retrospective concert at the Gramercy Theatre.

A banner behind the band showed a fist smashing a Nazi symbol. The concert began with “Hate Conquers All,” a song released in 2019 that surveyed how the political landscape under the Trump administration divided the world’s citizens. The second song, “The Press Corpse,” was about media complicity with a presidential strategy to divert attention away from questionable policies. Throughout the night, the musicians’ between-song chatter included rants against police brutality, racism, homophobia, sexism, bigotry, etc. In a non-political message, Anti-Flag offered fans the opportunity to become bone marrow donors. The other non-political message was the recurring instruction to “put your hands in the air.” The show ended with “Die for the Government,” a song about how governments use their military as a pawn in war.

Every song was powered by rapid chords, banging rhythms, and gang harmonies on choruses. Anti-Flag led a rock concert, not a protest march. Despite the seriousness and sincerity of its message, the band was aware that the audience was present with the intention of having a good time. Head-banging, sIng-alongs, fists and middle fingers in the air, mosh pits, crowd surfing and a random stage dive became celebratory actions. Much of the band’s passionate cries were for unity, and the standard rock concert responses helped serve that regard.