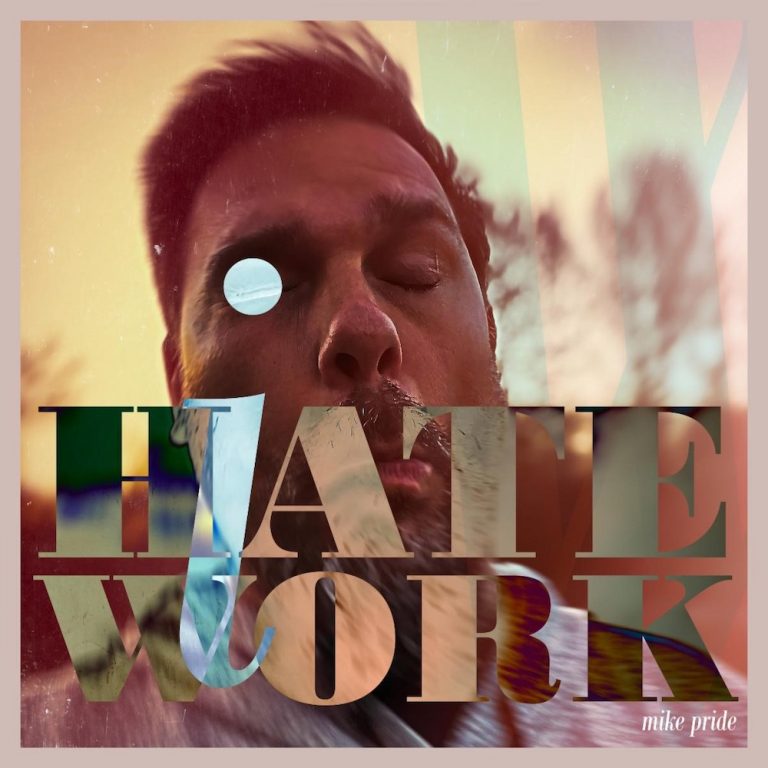 Hardcore band MDC was born in 1982 Austin at a time when punk bands were trying to be as shocking as possible, thus the Nazi swastika adorned many a poster. MDC’s Millions Of Dead Cops debut subscribed to this shock value aesthetic. Twenty years later, they were still together planning a Euro tour, but this time they needed a drummer. That’s when they turned to their much younger friend Mike Pride who stepped up and did 90 shows in 90 days. “I would never do it again,” says Pride today, “but it was a great experience.”

Pride, being Pride, set upon the complex and circuitous route of transcribing “every dropped beat and missed eighth note” of the debut, which was recorded in one epic speed-soaked session, reading from sheet music for his first year with the band. He lasted four more years before morphing into jazz.

Now, he’s taken those assiduous transcriptions and made pure fusion out of it with the RareNoise Records release, I Hate Work, complete with its “America’s So Straight” video (given to the The Aquarian as an American premiere).

The album combines swing, punk, post-pop, avant-garde, and metal into a hair-raising balls-to-the-wall statement of independence. After a few years with MDC, drummer Pride realized his musical palette needed more color than the limiting mono-maniacal rage burst he was being asked to drum for. So the title tune – originally a mere 24 seconds – is now over eight minutes long with MDC’s singer, Dave Dictor, playing the part of Frank Sinatra if he were bitten by zombies and returned to life decomposed to bite others.

“There’s a lot of meat on the bones of some of these tunes,” says Pride. So he slowed them down from their original blitzkrieg bop, figured out some chord progressions to go with them and reimagined the melodies. He needed help to make a jazz album out of a 39-year old punk debut with songs like “Dick For Brains,” “Greedy And Pathetic,” and “Dead Cops,” so he called upon Mr. Bungle electric bassist Trevor Dunn to play with his keyboardist Jamie Saft and acoustic bassist Bradley Christopher Jones. Two more vocalists, as well as secret weapon Mick Barr on guitar and electric 12-stringed banjo, rounded out this motley crew of demented sound scientists.

Dedicated to original MDC bassist Mikey Donaldson who accidently killed himself via overdose at the age of 46, I Hate Work defies categorization. He chose his bandmates specifically for that purpose. Saft pounds his piano but also plays a mellow mellotron. He’s another guy who you simply cannot pigeonhole into any one genre. Classically trained at the New England Conservatory of Music, he’s a New Yorker who felt as comfortable playing with Iggy Pop as he did composing movie soundtracks. He was a mainstay in the band of jazz trombonist Roswell Rudd until his 2017 death at 82 from prostate cancer. Bassist Jones, 58, is a jazz cat who’s worked with legends, learning from John Coltrane’s drummer Elvin Jones and free-jazz sax pioneer Ornette Coleman [1930-2015].

The addition of Mick Barr brings a death-metal tinge to “Corporate Death Burger.” Dude can shred! He’s also in the New York City black metal band Krallice whose Dimensional Bleedthrough album in 2009 is something of a milestone in certain circles, and whose current album, Demonic Wealth, was released only last March.

Melting genres to bleed into one another is nothing new to Mike Pride (who also plays keyboards). He’s been bringing extreme music – be it hardcore or metal – into the improvised world of jazz for as long as he can remember. All those years of experimentation have obviously paid off. I Hate Work has no precedent – and it sounds like nothing else out there today.

MIKE PRIDE’S NEW ALBUM, I HATE WORK, IS OUT NOW WHEREVER YOU LISTEN TO MUSIC! WATCH THE AMERICAN RELEASE OF THE “AMERICA’S SO STRAIGHT” MUSIC VIDEO ABOVE!