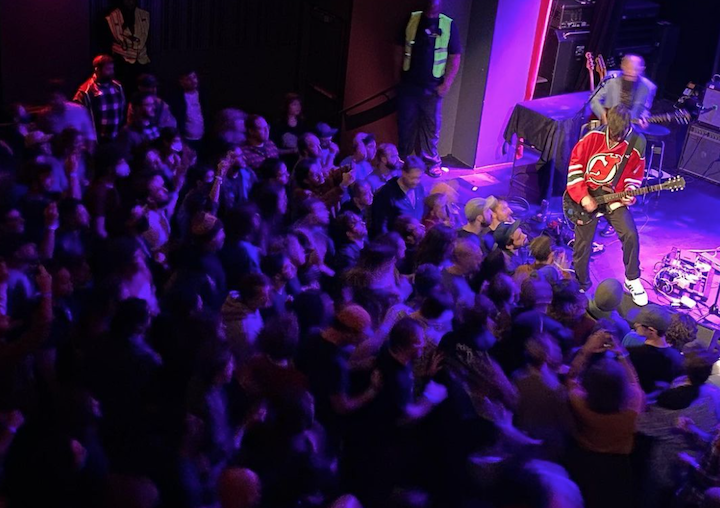 Nothing screams ‘Garden State’ more than a lively rock show by the beach, a fun string of expletives, and song titles with North Jersey towns in the title.

Originally, the show was supposed to be for the 10th anniversary of their modern classic album, The Monitor, where they were to play from start to finish. Supporting them was to be Wisconsin indie quintet Disq, however, on November 17, a member of Disq’s touring party tested positive for COVID-19 and they dropped off the last six tour dates. Titus Andronicus announced via social media they would take extra precautions to keep COVID at bay and would persist with the “Evening With” style show prior to The Monitor playthrough. Disq will be missed and we wish them a speedy recovery.

Titus is composed of bassist R.J. Gordon, drummer Chris Watson, rhythm guitarist Liam Betson, and vocalist and lead guitarist Patrick Stickles. Stickles is the mastermind behind the band’s lyrics. Formed in Glen Rock in 2005, this Shakespearian-named band has released six albums and have brought ferocity and literacy with each.

It was a clear, chilly night in Asbury with the full moon in full view. Not to brag, but I was first on line and first in the venue. The floor quickly filled with beards and denim jackets while a playlist entertained the crowd with a blend of Sinatra, pop-punk, and Civil War era folk songs. Then, Guns ‘N’ Roses’ “Civil War” played, signalling the band’s walkout music. A truly underrated GNR song – who would’ve thunk Axl Rose can be poignant?

The band emerged to raucous cheers and applause. Their first song was the Thin Lizzy anthem “The Boys are Back in Town.” “It’s been a long time since we’ve been here, New Jersey,” said Stickles with a smile. “This is our biggest Asbury Park show ever.” Cheers. “We all know what you came for, we know what it says on the ticket. You want to hear our classic album. Well, we don’t have one classic album, we have six.”

The band then played a career-spanning short set: “Fatal Flaw,” “In a Small Body,” and “Dimed Out.” Stickles paused and remarked on the strangeness of not touring for two years and being back on stage. “It’s strange, bizarre. It’s making me vulnerable, and you all know I’m not one to shy away from that. Instead, I will lean into this fierce wave and be sensitive for a moment.” He then started strumming “Fear and Loathing in Mahwah, NJ” and the crowd knowingly quieted… until the “FUCK YOU,” which was cacopphonous. And lastly, “Tumult Around the World” featured a clap-along and Pat said, “Put ya hands up folks, because this is a robbery.” Their sense of humor has not tarnished after all this time.

Stickles sings with almost a snarl and through gritted teeth. The veins on his neck are ever present when he screams into the mic – a sign of determined conviction and impenitent honesty. His withered and paint-peeling guitar is a staple of the band’s presence: steadfast. Dripping sweat is not enough. Stickles is soaked and he gives every ounce of energy. He is one hell of a performer. It’s in his sinew.

The newly named “Rock Fan’s Rock Band” then segued into The Monitor, a revolutionary album that takes listeners across the emotional spectrum, told with samples of Civil War speeches. Stickles does a quick “costume change” by donning a Union jacket over his usual white-tee/black pants combo and there was an immediate pushpit for “A More Perfect Union.” Followed up with “Titus Andronicus Forever,” the crowd shouted in unison to one of the many rallying cries of this record, “The enemy is everywhere.” The solo to that is Chuck Berry derivative, completed with Stickles duck-walking paired with Watson’s bouncy drums. Most of their songs have a cheery drinking song cadence to them, despite the frequent lyrical opposition. There are a lot of rather unusual lyrics you wouldn’t expect a crowd to rejoice in singing. Such as, “You will always be a loser,” that gets repeated about 150 times in “No Future Part III: Escape from No Future.” Or from “A Pot in Which to Piss,” which shouts, “I’ve been called out, cuckolded, castrated, but I survived. I am covered in urine and excrement, but I’m alive.”

Titus is one of the best live bands in terms of adhering to their studio sound. Every song is true to their original and every note is played precisely. Cohesive is an understatement. The mixing is incredible. And they’re a pretty bare-bones band; no frills. Basic lighting, no visual displays, just music.

A pianist joined them for “A Pot in which To Piss” and stayed on through the end of the show. After “Four Score and Seven,” Watson, Gordon, and Betson stepped off stage, and onstage walked “Frank,” playing the part of a bartender. The pianist played some easy-listening while Stickles monologued about going to a place where everyone knows your name, and pretending to sit at ‘Frank’s Bar.’ Spotlights shone on Stickles as he professed his woes to Frank and performed “Theme from Cheers,” a song about realizing drinking long term will be ruinous.

After that song, Stickles reflected to Frank how he might’ve been misguided about those woes he just unloaded. Life turned out pretty good; family, friends, a roof over his head, a girl back home waiting for him, his job in a rock band, and the fans who have helped them along the way. “Not a single one of them is expendable to me,” he told Frank. “I’d like to propose a toast, ‘To Old Friends and New.’” Then started with a tear jerking rendition of my favorite song of theirs. No guitar solo though, just the pianist playing while Pat sat with Frank. The song ended with the singalong of, “It’s alright the way that you live, it’s alright, the way that you live.” I’m a wreck when they play that.

The band rejoined the stage and played the last two tracks, “…And Ever,” and “The Battle of Hampton Roads.” “Hampton Roads” is a 15 minute punk epic, originally featuring bagpipes. The bagpipes were substituted with pedals on Stickles pedalboard but still true to tone. And just when the crowd thought that was the finale, Pat did another costume change-into a New Jersey Devils jersey- and struck up a reprise of “A More Perfect Union,”with piano embellishment this time. The Monitor ended where it began. The crowd wouldn’t have minded if Titus replayed that album again.

A special evening the audience will never forget. And as always, “IT’S STILL US AGAINST THEM.”