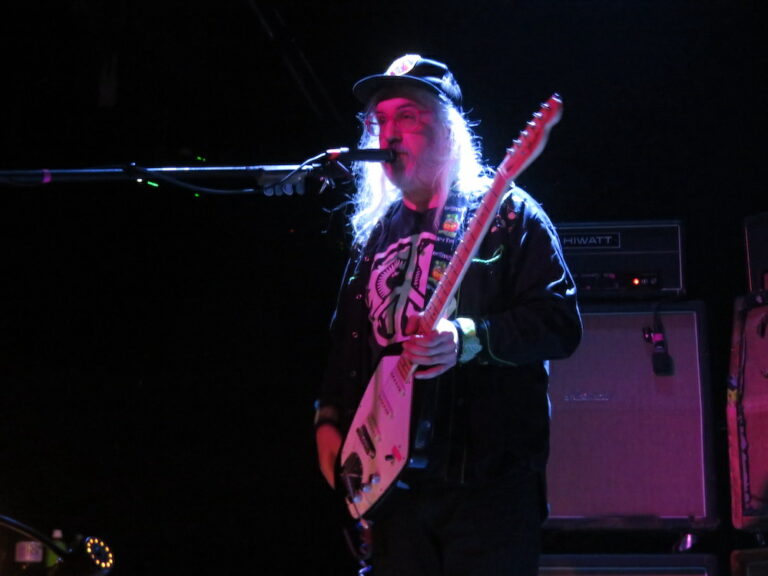 During the classic rock years, stacks of amplifiers were commonplace. Due to advanced technology, amplifiers are barely visible at all anymore – unless you are Dinosaur Jr. and you are ready to make ear-bleeding rock and roll happen. Dinosaur Jr. is among the few remaining bands that bridges the world of classic rock and indie music.

Born in 1984 in Amherst, Massachusetts, the band was an anomaly during the colorful days of MTV. When it came to the visual medium, guitarist J Mascis, bassist Lou Barlow, and drummer Emmett Patrick Murphy (“Murph”) were not much to look at. The plain-looking long-hairs were focused more on creating new alternative music that adopted much of the extended guitar solo structure of dinosaur rock with the noise rock of bands like Sonic Youth. Unwittingly, Dinosaur Jr. helped usher the birth of grunge, which similarly married vintage rock patterns with new influences, then split in 1997, reforming in 2005.

At Brooklyn Steel, six amplifiers were assembled in a semicircle behind Mascis. Trays of pedals and distortion effect encircled his feet. Mascis leaned into his microphone to sing in his somewhat whiny and nasal drawl. Barlow shook his body with seemingly every note on his bass and Murch attacked his drums with fury. Yes, indeed, this was the Dinosaur Jr. the public came to enjoy.

The set consisted of songs from eight of the band’s albums, the largest number, five, derived from the most recent album, Sweep It into Space, which the band released on April 23, 2021. Aside from the new songs, almost the entire set was comprised of songs from the 20th century, before the band dissolved in 1997. Except for one song from 2007’s Beyond, the interim albums were ignored.

It hardly matters which songs the band played. The public was there to hear Mascis wail on his guitar, and that he did, liberally spiking his soaring guitar leads with feedback and distortion. Repeatedly, Mascis maximized the indie loud-quiet dynamic, contrastingly blasting fast and wild guitar noodles with his droning slacker vocal melodies. The unrestrained power-trio’s interlocking rhythm section supported Mascis with a heavy, chugging bottom. Barlow toyed with distorted lows on his bass and Murph pounded a sense of order amidst the chaos.

Mascis’ white mane and beard were a reminder that Dinosaur Jr. has been making cantankerous music for four decades. That music remains relevant today. Maybe it is time to open the canons of classic rock and welcome the hulking sound of Dinosaur Jr.