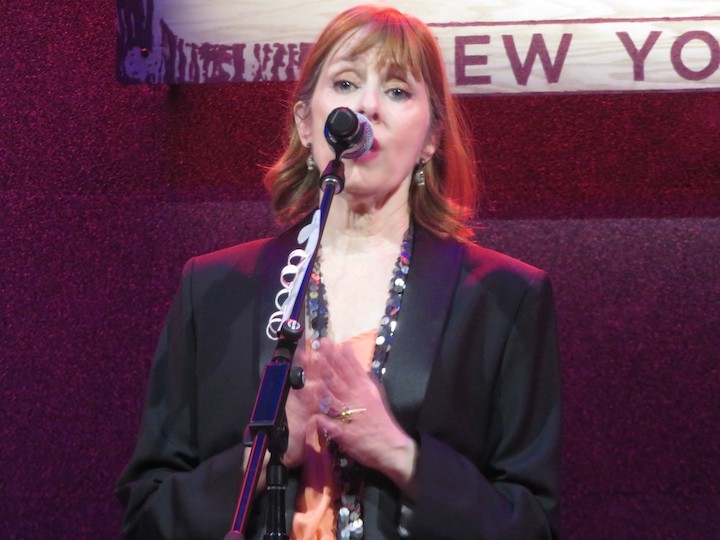 Suzanne Vega is telling New York stories in her songs these days. Having moved to the city with her family at age two, New York remains the center of her axis. While attending college uptown in the late 1970s and early 1980s, she began playing the downtown folk circuit and became the first of the Fast Folk movement to record an album. A rarity at the time, her acoustic guitar-centered second album in 1987 sold more than a million copies in the United States and three million worldwide. Vega’s most recent album, An Evening of New York Songs and Stories, released on September 11, 2020, was recorded live at the Café Carlyle in Manhattan’s Upper East Side.

Moving to Chelsea’s City Winery NYC for two nights, Vega sang and played guitar with periodic accompaniment from her daughter, vocalist Ruby Froom, long time collaborator and guitarist Jerry Leonard, a keyboardist, and a bassist. Shortly after beginning her performance, Vega explained that she was starting the show with familiar songs from her catalog. Although the show was entitled “An Evening of New York Songs and Stories,” the repertoire was not locked exclusively into one geographic location or theme, as she explained while introducing the song “In Liverpool” about a youthful fling she had with an Englishman. The centerpiece of the concert may have been a trio of New York songs performed back to back in the middle of the performance, “Frank & Ava,” “New York Is My Destination,” and “New York Is a Woman.”

Between songs, Vega charmed her audience with anecdotes explaining the origins of her songs while simultaneously revealing snippets of her New York life. Vega’s performance was soft, warm and even melancholic, ranging broadly from songs that were folk-centered to compositions that leaned into show music and dance pop genres. An intriguing “I Never Wear White” was a bit more rocking, as was the closer of her main set before the encores, “Tom’s Diner.” In her encores, she clicked into New York pop with Blondie’s “Dreaming.” Maybe the concert was not all it was billed to be, but it was very sweet.