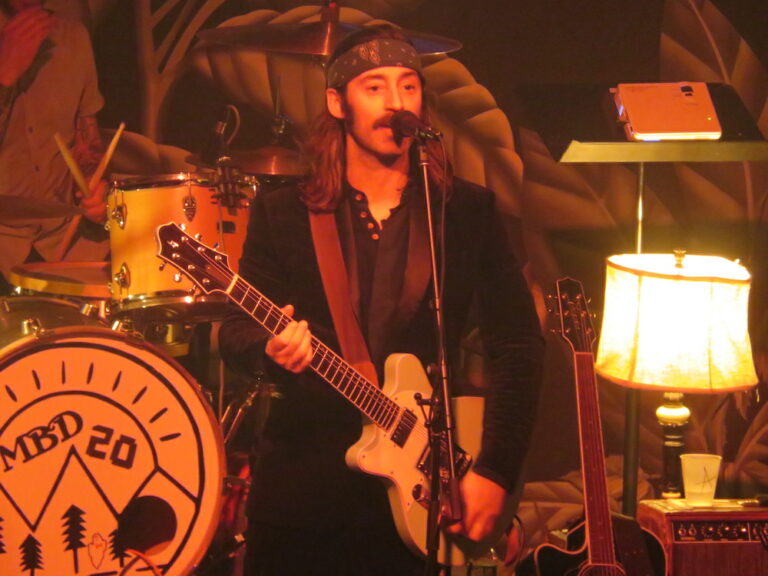 Murder by Death is from Bloomington, Indiana, and perhaps that is part of the reason that the five musicians are intimately integrated with heartland Americana. Being somewhat youthful when the band started in 2000, they injected a very indie touch to the music. Murder by Death’s music sounds familiar yet left of center.

Originally named Little Joe Gould, by 2002 the band became known as Murder by Death, a moniker derived from the 1976 Robert Moore film of the same name. Murder by Death presently consists of two original members, vocalist/guitarist Adam Turla and cellist Sarah Balliet, with keyboardist and trumpet player David Fountain, violinist Emma Tiemann, bassist Tyler Morse and drummer Dagan Thogerson. The band released its ninth and most recent album, Lonesome Holiday, on November 30, 2020, in time for the December holidays. Murder by Death intended a 20th anniversary tour, but out of necessity, the tour came a year later.

Murder by Death did not perform any songs from the holiday album at its concert at Warsaw in Brooklyn. Instead, the band played songs from all the earlier albums, plus a non-album song from 2009, “Pizza Party! (at Gloria Estefan’s House).” Many of the songs borrowed sprinklings of traditional sounds like jigs and waltzes, with the cello and violin adding lush flourishes to the foundational dynamic of the compositions. A fair number of songs had lilting melodies, but when the time was right, the band knew how to inject an energizing rhythm that had the standing audience bouncing to the rhythms.

In a contemporary music culture where guitars and synthesizers are the dominant lead instruments, Murder by Death offered a stark alternative. Turla’s passionate delivery was the axis on which the songs spun. Turla’s guitar and Fountain’s keyboards often were not prominent at all. Instead, an unusual undercurrent buoyed the strong vocal melodies, as the drifting sound of the cello and the violin supplied a majority of the leads.

Murder by Death has stated in interviews that its lyrical themes include lust, betrayal, and classical archetypes of good and evil. Many of the songs colored these themes within humorous or ironic images. Others explored them by delving deeper into the darker mysteries of life, for which Turla’s husky voice was particularly well suited. Somewhere between rock, alt-country and American, could there be such a genre as gothic Americana?