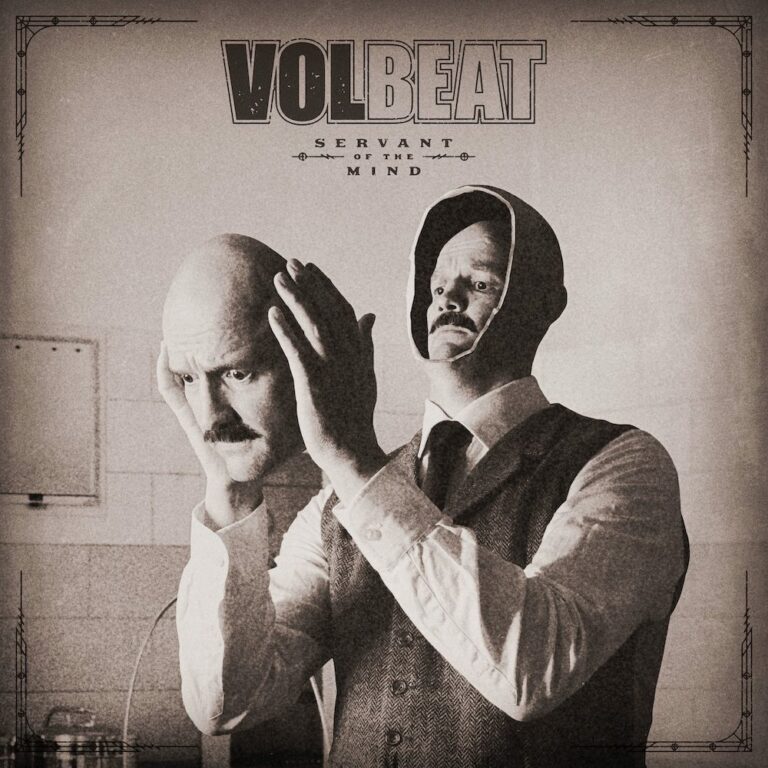 What happens if you’re a musician in the midst of a global shutdown? In Volbeat’s case, they decided to harness all of the energy reserved for live performances and created a monster in the form of their eighth studio album, Servant of the Mind.

Volbeat, the Danish rockers consisting of Michael Poulsen (guitars/vocals), Jon Larsen (drums), Rob Caggiano (guitars) and Kaspar Boye Larsen (bass), deliver a mammoth 13 track powerhouse with their signature style – just add a tablespoon of Metallica and Thin Lizzy, a teaspoon of Social Distortion, The Misfits, and Anthrax, a sprinkling of Little Richard, and a bunch of pelvis shaking from The King of Rock and Roll. They took that unmistakable combination and went up a notch… or three.

Poulsen said, “I wrote the whole album in three months. I was in a good place and mood while at home, and had a captive audience of myself… There are a lot of Volbeat signatures in it. If you go back to the first record and compare it to where we are now, you can hear how the band has developed its style, while keeping the signature sound.” Poulsen and Caggiano provide a sonic assault like no other and the herculean backbone makes Servant of the Mind one of the best to come from Volbeat.

“Temple of Ekur” launches you straight back to the ancient city of Babylon with epic storytelling reminiscent of “The Gates Of Babylon” from Seal The Deal & Let’s Boogie. The next track, “Wait A Minute My Girl,” was released as its first single. The lively love song Poulsen penned for his fiancé quickly jumped to the top of the Billboard Mainstream Rock Airplay chart. It became the band’s ninth chart-topper and it’s clear why. “The Sacred Stones” follows with the tale about “an earthly being who has committed himself to the dark side. He is on a mission, speaking to darker forces and fallen angels.” Everything about it is sinister and I love every second of it. “Shotgun Blues” is a tale straight out of Ghost Hunters with rockabilly flair.

Just when you think they couldn’t possibly get heavier, they pleasantly surprise you time and time again. This is evident from “The Devil Rages On,” a tune crafted about a devil morphing into a mortal form (I can think of a few instances of this happening throughout the history of humankind. Just kidding… I think.), as well as “Say No More” and “Heaven’s Descent.”

Poulsen and crew team up with Stine Bramsen, solo artist and member of Alphabeat, to provide a brief breather with “Dagen Før.” I like to think this track is the oasis on Servant of the Mind. The stunning duet is sung in both English and Danish, similar to previous recordings such as “For Evigt” and “The Garden’s Tale.” It’s one of my favorites and I hope they issue this as a single.

“The Passenger” and “Step Into Light” follow and emit sheer power with buoyant lyrics. “Becoming,” the fourth song to be released, as a “tribute” to the legendary Swedish death metal band ENTOMBED, whose lead singer Lars-Göran “LG” Petrov died after a battle with bile duct cancer. You can definitely hear the inspiration from the ‘Clandestine’ album, which was Petrov’s favorite ENTOMBED record. “Mindlock” keeps the momentum going. “Lasse’s Birgitta” cleverly bookends the album by addressing the first witch burnings occurring in Sweden in 1471.

Servant of the Mind will be an unmistakable addition to your collection if you’re already a fan of Volbeat. I’m sure they garner a new allegiance of devotees, especially since they are embarking on a nationwide arena tour co-headlining with Ghost beginning in January 25. In the meantime, what a spectacular way to wrap up 2021!

VOLBEAT’S ALBUM, SERVANT OF THE MIND, IS AVAILABLE NOW VIA REPUBLIC RECORDS EVERYWHERE YOU LISTEN TO MUSIC!