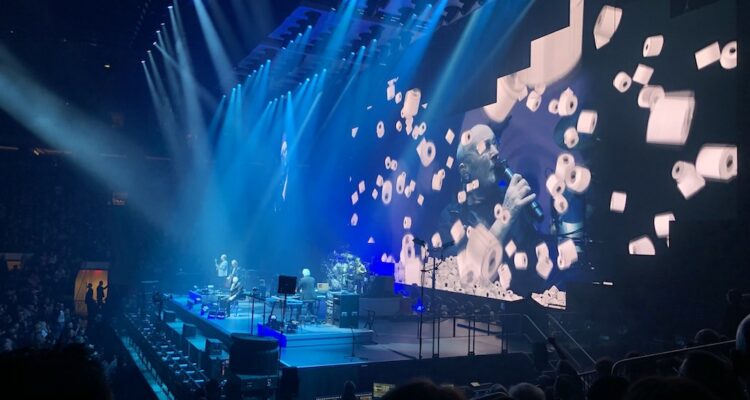 On March 3, 2020, Phil Collins, Mike Rutherford, and Tony Banks announced a U.K. reunion tour for the legendary prog/pop band Genesis. When tickets went on sale for The Last Domino? tour, they sold out in minutes. After adding a few more shows, those also sold out. It seemed Genesis was back after a 15 year hiatus… until the world shuttered about a week later. After a COVID-induced rescheduling and a year of worry, Genesis announced the tour would also come to our side of the pond, and visit the World’s Most Famous Arena on December 5 and 6.

Genesis was formed when five schoolmates of the Charterhouse School – Rutherford, Banks, Peter Gabriel, Anthony Phillips, and drummer Chris Stewart assembled in 1967. Stewart and Phillips would leave by 1970, and Phil Collins would join as their new drummer. When singer Peter Gabriel left in 1975, Collins would do double duty as their drummer and lead singer on their sixth album, A Trick of the Tail. In 1977, the band added guitarist Daryl Stuermer. The eighties saw Genesis shift from their progressive rock roots into commercial pop with a slew of popular music videos on MTV, more lineup changes, and even five Grammy nominations and one win for the music video of “Land of Confusion.” They have sold over 150 million records worldwide and they’ve been inducted into the Rock and Roll Hall of Fame in 2010.

The Last Domino? Tour is worth noting for several reasons. It is the first Genesis tour where Phil Collins is not drumming. Because of his health, he has passed the keys to the drumkit to his son, Nic. It is also the first tour with two backup singers/percussionists, Daniel Pearce and Patrick Smyth. As the name suggests, this also might be the last time Genesis may tour. Banks and Rutherford are both 71 and Collins will be 71 in January.

After a delicious pastrami sandwich from Carnegie Deli and sixties tracks from The Zombies, Aretha Franklin, Dusty Springfield, and more in the interim, the band hit the stage at 8:15 p.m., entering from stage left. Collins led the band, with a cane in hand, and proceeded to a stool downstage center. The band was met with a standing ovation before they even started playing. Their first song was “Behind the Line/Duke’s End” and featured Collins playing the tambourine. “Turn it on Again” followed and Collins seemed to miss the mark. I suspect he might be using a voice track in some difficult moments. Red lights and graphics and smoke filled the stage for “Mama,” the first single from 1983’s self titled 12th album. The laugh was sinister, complete with Bela Lugosi uplighting and a smirk. Stuermer’s solo was exceptional and Rutherford’s bass was tight.

After another standing ovation, Collins addressed the sold out crowd: “Good evening, New York. Good to see you. Thank you for coming out. You’re here, we’re here… it’s been a shitty coupl’a years, innit?” Laughter from the crowd filled the room. “But we’re gonna be here for a while, so let’s have some fun.” After a little introduction about the next song written in different circumstances, he prefaced saying it’s still relevant. The band struck up “Land of Confusion” with a pandemic-era animation of tourist sights barren, men in masks blindly marching en masse, and toilet paper falling from the sky. While Collins did stumble to hit the high notes, his voice was not totally un-salvageable.

“Home by the Sea” and “Second Home by the Sea” started with a crowd exorcism; everyone raised their arms in the sky and wiggled their fingers to remove the spirits and creatures from the floor and the walls. Green and blue lights paired with spooky animation and a domino-shaped light riser overhead provided an eerie atmosphere. Collins stood and walked to the drums midway through, then disappeared momentarily. He returned and hit his cue to finish the song. Banks’ keys especially shone on this track, and his bruised thumb might be from slamming those keys tenaciously.

“The Cinema Show” and “Afterglow” featured Nic’s prominent drumming, while dad turned toward him and proudly looked on. I’m glad Phil decided not to drum on this tour, because frankly, the drum parts he wrote are demanding. Nic excels in his father’s footsteps and we celebrate that, but it is still upsetting to know all the years of drumming have taken their toll on Phil. After yet another standing ovation, the crew clamored and rearranged the stage so all the musicians were in a tight-knit semicircle near Phil.

“You may have noticed a subtle stage change,” said Phil. “For the last 50 years, this guy (Rutherford) was standing over there, and this guy (Banks) was way over there. So let’s come close and do a singlaong.” “That’s All” was played acoustic and the crowd went wild. After that, “The Lamb Lies Down on Broadway,” a Peter Gabriel-era tune, received a big applause. The final line Collins sang, “They say the lights are always bright on Broadway/They say there’s always magic in the air,” showed him pensively looking up at the overhead lights, and a strong flourish for his final note. It was really special hearing that song, only a few blocks from Broadway’s magic. “Follow You Follow Me” legitimately followed, then the band returned to their original fullstage production for “Duchess.” This was the band’s sharpest performance. I was blown away by the colorful visuals and the band’s cohesion. Duke gets a bad rep. Some incredible songs, dare I say, some of Genesis’ bests are on that record.

Time to introduce the band. Smyth and Pearce received fair applause, and Stuermer as well. Then, Phil introduced his son Nic and the crowd erupted with a lengthy cheer. Lots of fans were air-drumming along all night. Next, he introduced Rutherford and Banks but they needed no introduction. Rutherford introduced Collins, and he humbly thanked us. “No Son of Mine” blended into “Firth of Fifth,” subsequently with “I Know What I Like (In Your Wardrobe),” yet another Gabriel track.

Rutherford has come under fire for playing Squire Stratocasters on stage, but that should not be a deterrence. While he did play a blue Squire for one song, he also played a red, tan, and teal Fender Strat for much of the set. And despite Collins sitting for the duration of the set, he commands the stage in a way only a lifelong musician can.

“Domino” was prefaced by Collins lighting up different sections of the audience and having them cheer to highlight the Domino Principle; one thing happens to one person or group, affects another person or group. One side cheers, the other cheers louder. Back and forth, front and back. It went on a little too long, a fan in the front row left to grab concessions or use the restroom. Collins noticed this and said, “Oy, she’s off. Come back.” The audience cheered for her to return, she did turn back to him and blew him a kiss, and he sent one back.

“Throwing it All Away” showcased the spines of Genesis cassettes and video snippets of the band throughout their career, and again, Collins falls a little flat, almost spoken word. But we forgive him. He redeemed himself when he hit the note in “Tonight, Tonight, Tonight,” which seamlessly transitioned into “Invisible Touch.” Black and yellow lights flashed to portray the 1983 album cover. An extended version of this song with repeated chorus and drum solo was a nice treat. The band concluded and were met with thunderous applause and Standing Ovation #12 of the night, then walked offstage for the band-audience-encore-dance.

The encore began with silhouettes of Collins, Rutherford, and lastly Banks walking their iconic, robotic step, signalling the start of “I Can’t Dance.” Genesis returned with Nic and Rutherford leading the song. Pearce and Smyth did the rhythmic step around the drum riser while Collins plowed through. “Dancing with the Moonlight Knight ” began acapella, but was cut short. Only the first verse was played, but they then segued into “The Carpet Crawlers.” One of the standout tracks from The Lamb Lies Down on Broadway, we all sang the refrain of “We’ve got to get in to get out,” as the final notes echoed through the arena. The band was met with thunderous applause as they bowed for potentially the last time in NYC.

The Last Domino? Tour is a career retrospective; songs from many different eras of the band. After about 55 years as a group, they humbly play homage to former bandmates. Collins does Peter Gabriel, Mike Rutherford does Steve Hackett, Nic Collins does Phil. Despite some missteps, this tour is worth seeing. There were no breaks in their 2.5 hour set. The MTV band’s astounding visuals paired with their undeniable talent pays for the admission in abundance.

It takes a certain amount of courage to acknowledge one’s own health concerns and make the decision to perform sitting down and give up the drums; Phil made it because Genesis has never been one to shy away from honesty. A band that has gone through numerous lineup changes and scandals, but pressing forward, Genesis’ retirement beckons bittersweetly. If you miss this tour, you may miss Genesis for good. Thank you, Rutherford, Banks, and Collins. You will be missed.