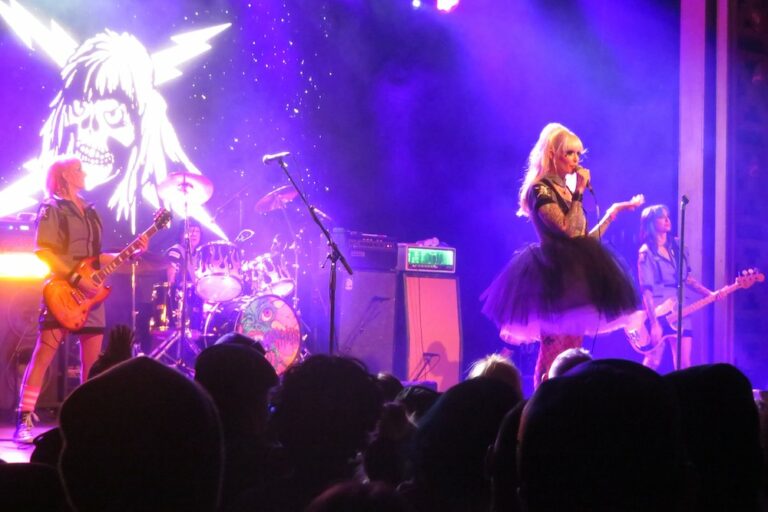 A trend in the concert industry is that a band reunites after a long hiatus and becomes a larger attraction than in the original incarnation, even with no new music to promote. Case in point: throughout Lunachicks’ peak years, from 1987 to 2000, the band headlined mostly in small clubs. With this latest reunion, Lunachicks headlined two nights at the 1500-capacity Webster Hall, the band’s largest hometown concert ever.

Lunachicks formed in 1987 when vocalist Theo Kogan, guitarist Gina Volpe, and bassist Sydney “Squid” Silver were students at a New York City high school. Soon after the writing and jam sessions became a serious intention, the trio invited Squid’s acquaintance, guitarist Sindi Benezra Valsamis, to join on rhythm guitar. Over the years, the group played local clubs, playing with a series of drummers. Upon Benezra Valsamis’ departure after 10 years, the band remained a quartet. Lunachicks recorded six albums from 1990 to 1999; the band’s only 21st century output has been a memoir, Fallopian Rhapsody: The Story of the Lunachicks, published on September 1.

As warm-up for the twice-rescheduled homecoming reunion, Lunachicks performed two shows this past September in Las Vegas, Nevada, marking the band’s first live performances in 17 years. The two New York City concerts, held over Thanksgiving weekend, had Baby Shakes as the support act on the first night, and the Toilet Boys, featuring guitarist Sean Pierce, Kogan’s husband, opening the second night. Local comedian and drag king entertainer Murray Hill was booked as the host for both nights but cancelled after his apartment was ravaged by a four-alarm fire on Thanksgiving Day.

As Survivor’s “Eye of the Tiger” blared through the room, one by one drummer Chip English, Squid, Volpe, and eventually Kogan seemingly danced to their onstage positions. Before long, Kogan howled a rallying lyric, “You’re aaaaaaaaa … mental case, ’bout time I smash your face” to an audience that bounced so hard that each unison landing shook the venue floor. The excitement on stage fed the audience and vice versa, raising the voltage level sky high.

Lunachicks’ older followers plus a new generation of fans saw the mod-looking and punk-sounding band pick up where it left off in 2000. The repertoire consisted of mostly later songs, but also included one song each from the first two Lunachicks albums. Towards the end of the hour-long set, Benezra Valsamis joined Lunachicks on stage for two songs, “Jan Brady” and “Drop Dead.”

Lunachicks’ performance was very much in-your-face from start to end. While the vocal melodies were pop-centered, coarse guitar and bass lines met pounding drums to make hard, fast, cutting-edge rock and roll. Even the frequent three-part gang harmonies were designed to be more volatile than smooth. Kogan and Volpe paced and danced all over the stage, occasionally playing off each other’s moves. As a result, the band was as visually arresting as its music. Only Kogan’s whimsical chatter between songs lightened the stage dynamic.

With no mention of future plans, the audience was left wondering the future of Lunachicks. No band member mentioned upcoming recording sessions or live performances. If Lunachicks takes another 17-year break, this brief series of performances may have been a once-in-a-generation event.