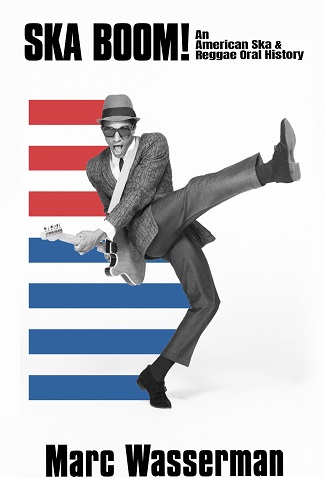 Diving Into The World of Ska & Then Some

Marc Wasserman has spent the majority of his life dedicated to ska and reggae. His ardent love for the genre began in 1983 after seeing the English Beat and Madness. He co-founded New Jersey’s first ska band, Bigger Thomas, at Rutgers University in 1988 and went on to form Rude Boy George and Heavensbee. He continued by authoring a blog, Marco On The Bass, that spotlights every aspect of the American ska and 2 Tone sub-culture. The response to the blog sparked his enthusiasm to pen Skaboom! An American Ska and Reggae Oral History.

“My love for 2 Tone and American ska has consumed much of my adult life and I’m grateful for the opportunity to tell the story of the origins of American ska. This music and this scene that had such a huge impact on me and made me who I am today also helped transform American music in so many ways,” Wasserman says. “The truth is that without the hard work and dedication of the bands featured in the book, there is no Mighty Mighty Bosstones; no Rancid; no Fishbone; no Mustard Plug or Suicide Machines.”

Wasserman conducted a myriad of interviews with those involved in the birth and growth of American ska and reggae in the 1980s and early 1990s. They include the musicians, DJs, writers, club promoters, fans, and others who experienced the beginning of this new craze first-hand. Some of those creators consist of The Toasters, Mephiskapheles, and Let’s Go Bowling. Added bonuses include an essay from Stephen Shafer, a foreword by Horace Panter of The Specials, and photos.

The chapter I relished the most was the inclusion of The Hooters. Wasserman spoke with Rob Hyman, Eric Bazilian, and Cyndi Lauper in this section. This band has been near and dear to me for years, so it was delightful to read about their formation. Hyman discussed his discovery of ska and reggae in depth. He says, “I was a teenager in the mid-sixties and we were lucky enough to go on a family vacation to Montego Bay, Jamaica… I remember hearing ska on the car radio as we drove around, and I’m like, ‘What is this?’ I mean, it was such a crazy beat, it was backwards, it was odd, it was as strange as everything else to me in Jamaica back then, but I really took to it. Because I had some musical inclinations, I became obsessed.” I would suggest you listen to Amore to really hear those influences.

Skaboom! An American Ska and Reggae Oral History is over 450 pages long, but it is well worth the time, if you love music history or this particular genre. Be sure to listen to Wasserman’s podcast by the same name for more content. If you’re a rude boy or rude girl, this will definitely be your cup of tea.

Skaboom! An American Ska and Reggae Oral History by Marc Wasserman is available wherever books are sold via DiWulf Publishing.

FOR MORE INFORMATION ON THE BOOK AND PURCHASE OPTIONS FOR IT, CLICK HERE!