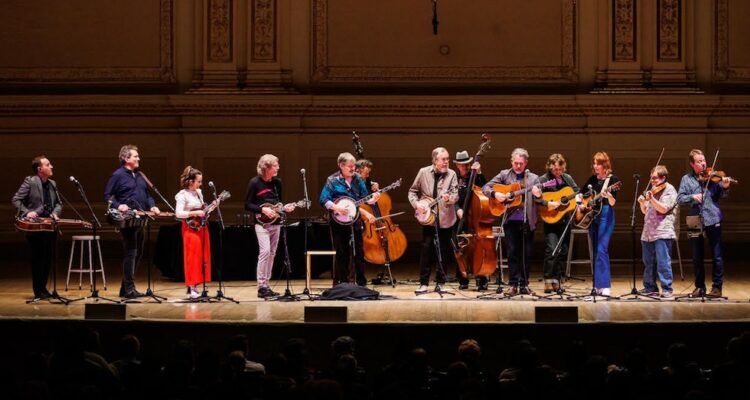 Banjo virtuoso Béla Fleck returned to the city in which he was born and raised for a concert at Carnegie Hall celebrating his first bluegrass album in more than 20 years. For this concert, he brought along an accompanying retinue of esteemed bluegrass musicians. The guests are among those who contributed to his My Bluegrass Heart album, released on September 10.

Bluegrass is not often played at Carnegie Hall. The very first bluegrass concert at the prestigious auditorium was in 1962, when a performance by headliners Lester Flatt and Earl Scruggs with their band, the Foggy Mountain Boys, elevated bluegrass to a higher public stature. Fleck first performed at Carnegie Hall with his band, Bela Fleck & the Flecktones, on June 30, 2007.

My Bluegrass Heart is the third chapter in Béla Fleck’s trilogy that began with 1988’s Drive and continued 11 years later in 1999 with The Bluegrass Sessions: Tales from the Acoustic Planet, Vol. 2. In the interim, Fleck became an adventurous ambassador of the banjo, earning 15 Grammy Awards in nine different fields, including country, pop, jazz, instrumental, classical, and world music. The current album and tour signaled his return to instrumental bluegrass.

Each composition featured a different team of players, ranging from two (a duet between Fleck and Thile) to 13 acoustic instrumentalists. Often, with so many players picking on their instruments, even finding who was playing a lead was challenging. Because Carnegie Hall utilizes no spotlights, it was up to the attendee to follow the quick changes in lead instruments in many pieces.

The set consisted of all instrumental music until the encore. The main set consisted largely of songs from the My Bluegrass Heart album. The encore songs sourced other songs. Throughout the evening, the musical finesse was dazzling. For bluegrass fans in New York, which is not often frequented by such bluegrass luminaries, this might have been a concert of a lifetime, as Fleck predicted in a press release days earlier.

“Calling something the ‘concert of a lifetime’ sure sounds like hype, and in many cases it would be, but not this time!” Fleck said in the press release. “At least for my world and my music, this is an unprecedented opportunity to bring some of the brightest instrumental lights in bluegrass – or any other music for that matter – to the incredible Carnegie Hall stage.”