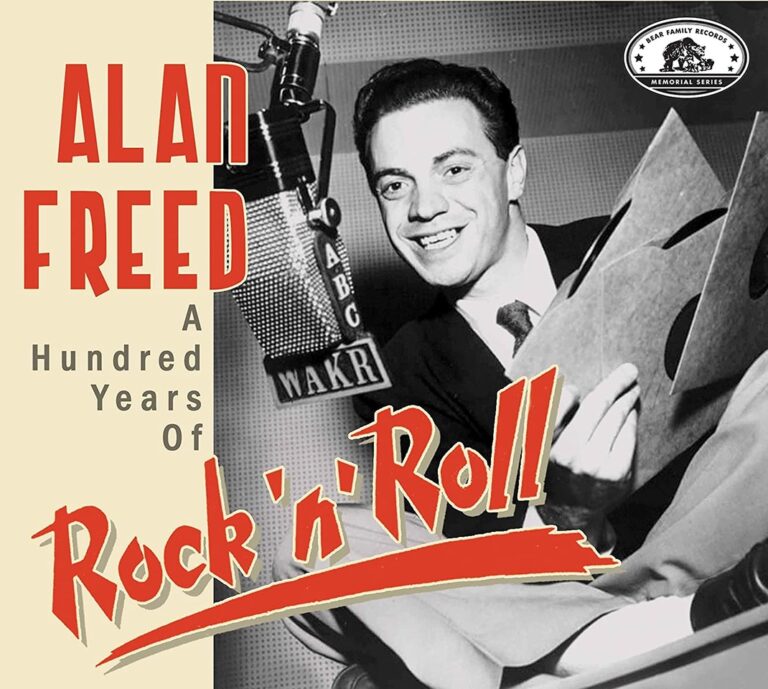 Imagine being able to go back in time and listen in on legendary disc jockey Alan Freed’s early- and mid-fifties rock and roll radio shows on Cleveland’s WJW and New York’s WINS. That’s essentially what you can do with Alan Freed: A Hundred Years of Rock ’n’ Roll, which must rank among the most indispensable recent releases for anyone with an interest in and affection for the genre’s early days.

The 80-minute, 39-track disc, which comes with an informative 36-page booklet, includes examples of some of the music that gave birth to the rock era. Interspersed with the songs and adding to the anachronistic mood are station IDs and Freed’s monologues, which include his apology for a riot that occurred at one of his rock ‘n’ roll shows and commercials for beer, furniture, and a modeling agency.

The program embraces some relatively well-known recordings, such as the Johnny Burnette Trio’s rockabilly rendition of “Lonesome Train (On a Lonesome Track)” and Jesse Belvin’s R&B ballad hit, “Goodnight My Love (Pleasant Dreams).” Priceless harder-to-find material predominates, though, including boogie-woogie and big band–influenced numbers like the Freddie Mitchell Orchestra’s “Moon Dog Boogie”; Otis Williams and the Charms’ doo-wop reading of “Two Hearts,” which was a Top 10 R&B hit in 1958; a rare live version of Little Richard’s “Lucille”; and two wild sax-driven gems, Gil Bernal’s “The Whip” and Sam “The Man” Taylor’s “The Big Beat.”

An Exquisite Love Letter to the Old West

Singer/songwriter Eliza Gilkyson has released about two dozen albums in a career that stretches back to the late 1960s. That’s a lot of music but the new Songs from the River Wind may be the best of the bunch. It’s also a departure from her acclaimed recent work: her last six CDs have addressed social and political themes, this exquisite, beautifully sung record celebrates roots, romance, and the natural beauty of her Southwestern home turf.

The program, which Gilkyson calls her love letter to the Old West, features spare, consummate backup and mixes her modified versions of traditional numbers with terrific originals. The former group includes the Irish ballad “Wanderin’,” which her father (the late folk singer/songwriter Terry Gilkyson) recorded in 1958, as well as “Colorado Trail” and “Buffalo Gals.” Among the self-penned tunes are the fiddle-spiced “The Hill Behind This Town,” in which Gilkyson recalls the view of New Mexico sunsets from behind a converted old wooden boxcar she once lived in; “Wind River and You,” in which she addresses the part of her “that just wanted to live out the romantic notion of being a western ranch girl”; and “Don’t Stop Lovin’ Me,” which she says relates to her decision to settle down in Taos, New Mexico.

Gilkyson has found a new home – and hit a musical home run in the process.

If you listen to oldies radio stations or have been old enough to join AARP for a couple of decades, you undoubtedly know Mickey & Sylvia from their one big pop hit, 1957’s classic “Love Is Strange,” and perhaps from the subsequent “There Ought to Be a Law,” which made it to the top 10 on the R&B charts. But there was much more to Mickey Baker and Sylvia Robinson (nee Vanderpool) than these tunes.

Baker, who died at age 87 in 2012, was a terrific guitar player who went on to produce excellent solo albums and back up a wide range of artists, including Clarence “Gatemouth” Brown, Solomon Burke, and Screamin’ Jay Hawkins. He even played on the 1959 first recording by the Jades, a band of high school students that featured Lou Reed. (Three decades later, Reed would reference a line from “Love Is Strange” on New York’s “Beginning of a Great Adventure.”)

As for Robinson, who died at 76 in 2011, she had a big solo hit in 1973 with “Pillow Talk.” She is best known, however, as the founder of the pioneering hip hop record label Sugar Hill, which issued such landmarks as “The Message” by Grandmaster Flash and the Furious Five.

The Singles & Albums Collection 1952–62, a two-CD, 59-track set, does a great job of covering Mickey and Sylvia’s years together. It also makes room for a few early solo tracks by Sylvia as well as some post-breakup efforts by Mickey, including most of a solo instrumental album called The Wildest Guitar and a few tracks he cut with singer Kitty Noble, his replacement for Sylvia.

Not every number in this new doo-wop, R&B, and pop anthology is a winner, but there’s easily enough here to make the case that Mickey & Sylvia’s collaborations deserve more than a footnote in rock history. Their playful vocal duets are charming, and she could be a particularly strong singer on songs like “Two Shadows on Your Wall.” Moreover, while you don’t have to dig deeper than “Love Is Strange” to see what an inventive guitarist Baker was, there’s evidence of that all over this collection.

From the Backyard to the Front Porch

Digging in John’s Backyard, the new album from harmonica player Grant Dermody and guitarist Frank Fotusky, features a title that references the late Piedmont-style country blues guitarist John Jackson, who inspired both musicians. The acoustic blues set mines the territory Jackson occupied, and it’s a delight from start to finish.

Part of the album’s charm is its simplicity: there’s no fancy production, no electrification, and no backup crew – just a couple of blues masters sounding as if they’re playing favorites on a front porch somewhere. If you like the early blues giants whose compositions they feature – as well as more contemporary exponents of the genre like Roy Book Binder and Taj Mahal – you ought to give this one a listen.