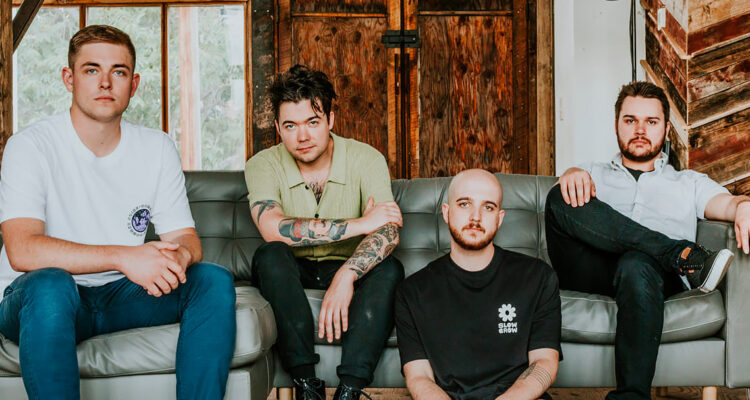 Colorado’s finest rock band is on the rise, and they may have tricks up their sleeves and music videos worth watching, but at the end of the day, their mindset is simple: make kickass, melodic, fun, and ever-lasting music that translates on stage and off, keeps people (and themselves) wanting more, and reflects honestly on the personal.

“We’ve been sitting on these songs for awhile,” Dawson Frye admits about the forthcoming One Flew West record in a buoyant early morning video chat with The Aquarian. “[The album] was already starting to be written before the pandemic, so a lot of the stuff in the lyrics were kind of based on what happened in the six months to a year before the a pandemic.”

One Flew West may have had to hold back on releasing some of their best work because of a serious global health crisis, but the power of the muisc remains. In actuality, we think it holds up in new ways – stronger ways – than had it come out any earlier than present day.

Through all the hardships and question marks that arose over the last two years, this alternative rock band was patient and diligent, revving their musical engines for the day that they could put the pedal to the metal. We mean this both literally and figuratively, as the band is taking off on a tour very soon of the West Coast and Midwest, but also are a handful of singles in toward their debut LP. (The Blur is set to drop on March 25 via Smartpunk Records – the label who recently signed the band after they shone on the music festival circuit and steadily grew a fanbase on a regional level starting in 2014.)

Today we are honored to present and premiere the music video for “Hopeless.” One Flew West has created a single that is hopeful (Ironically, yes.) and nostalgic without feeling too mundane or preach-y, but you are, in fact, thrown back in time with the visual aspects that you can find in it. Frontman Linden Jackson takes center stage and is immersed in a variety of aspects that were thought out specifically for the video – an antiquated desktop computer, the blandest cubicle you’ve ever seen, and these internal and external pressures of doing what is best for yourself when you need to, when your decision-making is questionable, and when you feel stuck and hopeless in your day-to-day routine. Experience it now, thanks to our exclusive premiere:

“The music video turned out great,” David DiSalvo tells of the pop punk track that could easily be seen on late nineties MTV smack in the middle of a Green Day hit and a Smashing Pumpkins tune. “We’re so happy with the people we worked with on that. They did a great job and it’s on the most intense video we’ve ever done. A lot of production went into it.”

David and Dawson go on to tell us all about how Linden had to spend hours outside at a real gas station, in the cold, while the rest of the band [David, Dawson, and drummer Jonah Bartels] stayed warm in the van away from the lights, gear, and personnel who worked for hours to get Linden’s scenes, and the story at large, done right.

Linden, when you read this, your bandmates truly appreciate you, admire you, and are also very thankful they weren’t out in the freezing cold filming this as the face of the video.

The greatest achievements and liveliest art come from these moments of breaking the mold and putting effort in what deserves it, though, and “Hopeless” is the track to depict that. These feelings are universal, put on a pedestal and dissected in a roaring pop-punk way here and now by this video. During the COVID-19 pandemic, we’re feeling all of that and more. “Hopeless,” this brand new song and video from One Flew West, comes at the perfect time… and everyone should be thankful for that.

“I think that’s something we strive for – to have songs that kind of transcend a certain time period…. Songs that can really be applicable to anyone depending on where they’re at and in their current situation too. ‘Hopeless’ is a good example of that,” Dawson reiterates. It’s true, too, “Hopeless” is simply timeless.

This all leads into The Blur, which releases about two months from now. “Hole In My Jeans,” the first single off the album, flows immaculately into “Hopeless,” and that is impressive without even hearing that it all comes to a head on the full length record. “We tried to keep the whole theme of The Blur to be kind of about growing up and realizing all these things about ourselves as adults. I think it worked out,” David explains about the trickle down of messages and meaning going into the songs. There is one more single coming next, too, that will be the final preparation for The Blur.

“I really do feel like the fourth single, the next single, flows in that story, as well,” Dawson adds. “It’s a great ending for that four song story and four song arc that you’re getting through the singles.”

He continues to tell us about what it feels like to get together this record and be so close to it finally being a whole package out in the world. “Closure is a big piece of it. You’ll even see with the fourth single, it takes a slightly different musical tone than the other singles. I think that it kind of changes our voice, but it doesn’t drop the theme overall. It is just presenting the same ideas of ‘Hopeless’ in more of like a reflective way and in a kind of a closing manner. I definitely think it’s perfectly suited for that last single slot and follow up to this. We didn’t write it in the studio and think ‘That’s the last single, for sure!’ When we listened to them all in order, though, it was a no brainer that that was the bow to wrap up The Blur.”

“Honestly, we’ve never put out more than an EP,” David states with earnest. “It is very satisfying to finally put out a full release that has a story that we’re proud of on every song on, because I can’t always go back and look at everything we’ve done since high school and be like, ‘I’m proud of every song.’ No, I’m not proud of every song we’ve put out, but this album is exactly what we wanted to one day make.”

“It feels like we finally found a sound that is us – and it took a while until Dawson joined. We didn’t have almost any punk influence before. Sure, we were all influenced by punk music, but we didn’t play any punk influence. Dawson only plays bass. Dawson also only plays punk music. It’s not like I can be like, ‘Go play some reggae,’ because he won’t do it. It completely changed our sound when he joined the band in 2016 and it’s only evolved positively and it’s only gotten better. Honestly, we wouldn’t be a band anymore if he had never joined.”

Now the grateful, alt. rock four piece that make up One Flew West and getting ready to do live shows again and share new music, and a few deep cuts, with fans. However, every song they are playing these days are them to the core, which makes OFW, OFW.

“I think it’s interesting for us ’cause we really pride ourselves on trying to basically what you get in the studio is a really well captured live performance,” Dawson notes. “We try to use our same gear, same setup, and just capture it really well. We always have. Our hope is always that when you hear a song live, you go, ‘Wow, that sounds just like the album.’ I don’t think that’s any different for ‘Hopeless,’ a song in a music video, or anything on this record either. Everything is pretty cohesive between live and studio. That is something we try to do and we are proud of that.”

YOU CAN KEEP UP WITH ONE FLEW WEST BY CHECKING OUT THEIR WEBSITE AND FOLLOWING THEM ON INSTAGRAM! THE BLUR IS OUT MARCH 25 ON ALL STREAMING SERVICES AND “HOPELESS” IS OUT NOW!