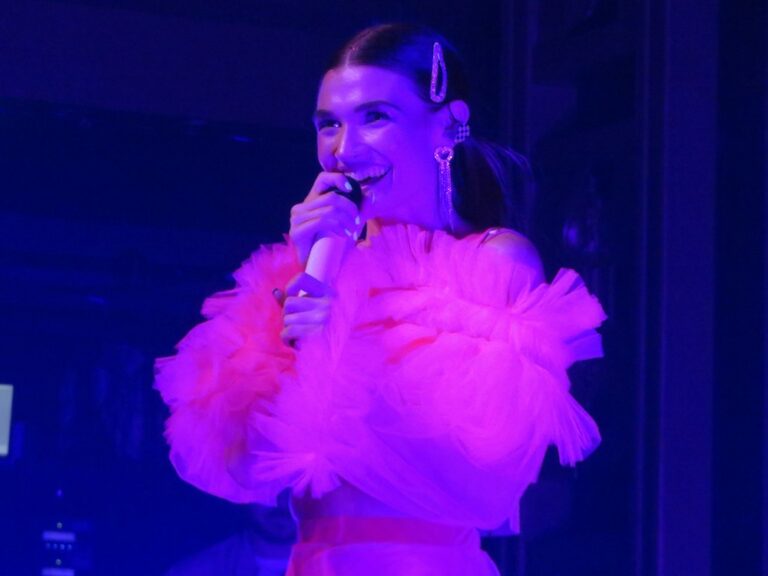 Starting a band can be a fun project. Almost inevitably, however, maintaining the band gets messy. The fun began for MisterWives in New York City in 2012, when vocalist Mandy Lee (Amanda Lee Duffy) wanted a 1980s cover band for her birthday party. MisterWives went on to perform publicly, encouraged by many affirmations along the way, including a record deal, television opportunities, opening slots on major concert tours, a growing fan base, and a wedding – Lee and drummer Etienne Bowler married. Fast forward to the next decade, Lee and Bowler separated, a founding musician quit the band in August 2021 after 10 years, the record company dropped the group and, in December 2021, several members tested positive for COVID, pausing the band’s “Resilient Little Tour.”

The new year is looking upbeat for Misterwives, which is comprised now of Lee, Bowler, bassist William Hehir, guitarist Marc Campbell, and saxophonist Mike Murphy. The signs of revival include the formation of an independent record company, Resilient Little Records, with an initial follow-up to the band’s 2020 album, Superbloom, a song called “Stepped on a Bee.” Rather than simply rescheduling its postponed December date at Webster Hall, the band celebrated the new year with two homecoming concerts.

After LPX concluded its well-received opening set, roadies spent much of the intermission dressing the stage for MisterWives. A floral motif included flowering vines wrapped around the three microphone stands and seemingly countless flowers and potted plants all around the staging area. A semicircular screen in back, reportedly designed by the bassist, would soon serve for projected videos and graphics.

From the very first musical notes, MisterWives’ high-energy performance had Lee dancing and jumping along with the fans below. The front line musicians also took animated stances to propel the stage dynamics. For “coming up for air,” Lee, Hehir and Campbell lined side by side for a few synchronized dance moves. Late in the set, Lee and three females danced synchronized moves for several songs.

The musicianship matched the lively stage activity. Nearly every song was pure pop, bright and bouncy yet quite magnetic in that their arrangements often took advantage of Lee’s soaring vocal range. The band performed most of the Superbloom album plus a few additional songs, playing the catalog with a consistent summer-like party vibe. Even when the lyrics got a bit broody, like on the slower “Valentine’s Day” and “Stepped on a Bee,” both of which possibly alluded to Lee and Bowler’s romantic break-up, the set quickly recovered its feel-good positivity.

Like most pop music, the songs lacked a historical connection to anything other than commercial pop radio fare. As a result, hardly anyone in the room was over 30 years of age. To appeal to a wider audience, the musicians would need to draw from more diversely rooted genres. So be it. As far as contemporary pop music goes, MisterWives delivered well.