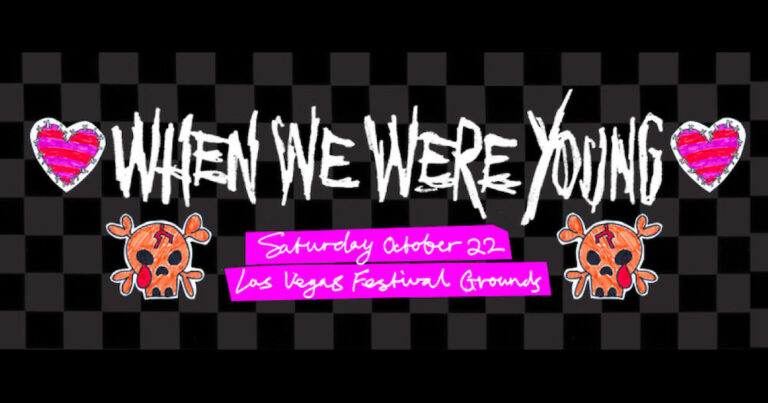 On Tuesday, January 18, The Maine posted a picture on their Instagram of the When We Were Young Festival lineup – and they were on it. I clicked the profile and followed the festival’s page. I was one of the first 1,000 followers (around 860), and kept refreshing the page. Within the span of about four minutes, the follower count jumped to 16,000. It currently has over 300k followers (and rising), yet at the time of writing this, it hasn’t even been a day-and-a-half.

When We Were Young Fest is currently the largest topic of discussion on Twitter, Facebook, and TikTok. It seems that the whole emo Internet is raving about this festival. While this may look like the biggest scene festival ever, there are some concerns I’d like to discuss.

Over 65 bands, and some of the biggest names in alternative music, are set to perform the WWYW Festival in Las Vegas in October. My Chemical Romance, Paramore, Bring Me the Horizon, A Day to Remember, Bright Eyes, Avril Lavigne, and many more are on the bill as headliners. Middle and high school aged-me is panicking.

Bands have expressed their excitement to be a part of the festival. Paramore posted a picture of themselves with the caption, “[sic] we’ve missed you.” This will mark Paramore’s first show back since June 2019. Neck Deep captioned their post, “Gonna tell our kids this was Woodstock.”

This lineup is absolutely unprecedented. But, this is not a weekend festival. It is a single day festival, slated to begin at 11:00am PST and end at midnight. The de facto comparison being made is Vans Warped Tour. Here’s where the concerns come in.

The biggest worry is it will be a superspreader event. In a story posted on Thursday, January 20, the festival’s Instagram account said they will look to the City of Las Vegas and the State of Nevada for guidelines. COVID vaccination may be required, masks not mentioned. If even 10% of their Instagram followers buy their ticket, that’s 30,000 fans flying domestically and internationally back to their families

Warped Tour worked for a multitude of reasons. First, the amount of stages allowed for a 50+ band lineup to perform on the single-day traveling festival. Warped had about 10 stages with appropriately sized bands listed correspondingly. Set times were staggered. When We We Young Fest posted a statement claiming they have “multiple” stages, but the rumor is three. If the rumors are true, that would be about 21 bands per stage. The second reason Warped worked: it was held annually, so any imperfections from the previous year could be tweaked before the next tour embarked. Thirdly, it has name recognition that grew as years passed.

How long will each band have to perform a setlist? “The length of set times will vary,” said the Instagram story. “Opening acts will have shorter set lengths while headlining performances can range up to an hour or more.” Lots of help there, thank you. It is very likely over the span of 13 hours each band will have no time to perform. 13 hours x 60 minutes equals 780 minutes, divided by 65 equals 12 minutes. Will that include stage set up, clean up, and break down? What if someone runs behind schedule?

The next worry is the ticket policy. Tickets are non-refundable and non-transferable. What happens in the coming months if a fan’s favorite band pulls out of the festival and they no longer want to go? What happens if the country sees another shutdown? These policies have inspired memes and dialogue, calling When We Were Young the “Emo Fyre Fest,” a disastrous fake festival that was a notable scam.

My last concern comes from recent tragedy. Travis Scott’s AstroWorld festival held in November of last year left 10 people dead. The fans became too rowdy and ended up trampling and crushing each other. All the fatalities were audience members. Live Nation put on that festival, and they are putting on this one too. The question on my mind is this: What measures have been implemented to ensure safety of the fans? Will there be additional security and medics onsite? How will they handle lines… lines for food, restrooms, merch, etc?

Hypothetically speaking, will there be enough room for the thousands in attendance? Room to view the stage, and better yet, room to breathe? With short set times, will there be a mass exodus to the next stage that grows as the day goes on?

Clearly, I have a lot of questions. There are nine full months until this festival happens, so hopefully we get answers in that time. I want to see this festival succeed, but I am nervous. My suggestions as a concertgoer are 1) Extend the festival to two days over one weekend, 2) Confirm how many stages there will be, 3) Update the ticket policy.

In the meantime, here is a playlist of songs by the WWWYF artists and bands that we will be enjoying until the festival date, October 22, comes around. You can call this playlist our dream setlist for if the acts were given the chance to perform one song each: