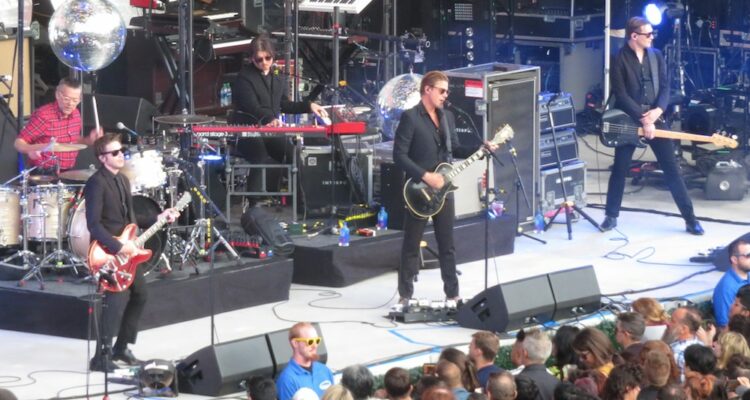 Among the newly announced concerts this week, Interpol will tour in 2022 and include a return to its New York origins. The band will headline two concerts at the Kings Theatre, on May 15 and 16. Tycho and Matthew Dear will be the support acts. “We’re heading back out on tour this year,” the band posted on social media. “It’s been way too long, and we’re very excited to play some shows!”

Goose added a second show at Radio City Music Hall on June 24 in addition to the already-announced June 25 concert. The band announced the news in a brief video on social media. “Thank you guys so much,” the band posted as the caption. “This is a dream come true!!!”

Daryl Hall will embark on his first solo tour in a decade from April 1 to 16. The tour will include a return to his hometown with a show at the Met Philadelphia on April 9. The routing includes a performance at Carnegie Hall on April 14. The tour will support the release of Hall’s first-ever solo retrospective, Beforeafter, on April 1. The two-disc set spans all five solo albums plus never-released recordings from his Live from Daryl’s House web/television series. Todd Rundgren, who performs with Hall on one of the album’s tracks, will be the support act on all of Hall’s tour dates.

STRFKR, announced its newly rescheduled tour dates on January 26. The band will perform at Brooklyn Steel on July 19. The Undercover Dream Lovers and Das Kope will be the support acts at that show.

The Fugees 2022 tour is canceled. In 2021, the Fugees announced a reunion and performed its first concert in 15 years on September 22 for Global Citizen at the Rooftop at Pier 17. A tour was booked for November and then postponed, with the Prudential Center concert moving from September 23 to March 12. “We anticipate and understand disappointment but our anniversary tour will not be able to happen,” the Fugees announced on social media. “The continued Covid pandemic has made touring conditions difficult, and we want to make sure we keep our fans and ourselves healthy and safe. An idea sparked to honor and celebrate this 25th anniversary of The Score but we see now it may not currently be our time for revisiting this past work. We’re grateful for the special night we did get to share with some of you in New York, with that rare live moment. If opportunity, public safety, and scheduling allow, we hope to be able to revisit this again sometime soon. THANK YOU For all your love and support throughout the years.”

Geoff Tate canceled his January 25 concert at Sony Hall eight hours before show time. “Due to illness (not COVID), tonight’s Geoff Tate show is postponed to June 15, 2022,” read the announcement online. “All tickets will be honored for the new date.”

Reigning Sound announced that the band would cancel its tour, which included a show at Brooklyn Made on March 15. The band’s Greg Cartwright explained that “Due to the recent surge of Omicron cases in the US, we are canceling the Reigning Sound spring tour dates. This was a hard decision to make. Reigning Sound and our touring partners, the Country Westerns and the Okmoniks, have been looking forward to these shows for nearly a year. We remain hopeful that Covid infection rates will decrease in the coming months. Perhaps we’ll be able to reschedule these shows sooner than later. Until then, we hope that you and your loved ones remain healthy.”

The Weather Station has postponed the beginning of its tour until February 12. The January 28 date with Sam Amidon at the Music Hall of Williamsburg is postponed until a later date to be determined. Other concerts appear to be canceled, with no new date available at press time include Erasure at Radio City Music Hall, the Dodos and Anna Fox Rochinski at the Knitting Factory, the Black Angels and the Vacant Lot at Brooklyn Steel, and Peter Wolf & the Midnight Travelers at City Winery NYC. The following shows were recently rescheduled.