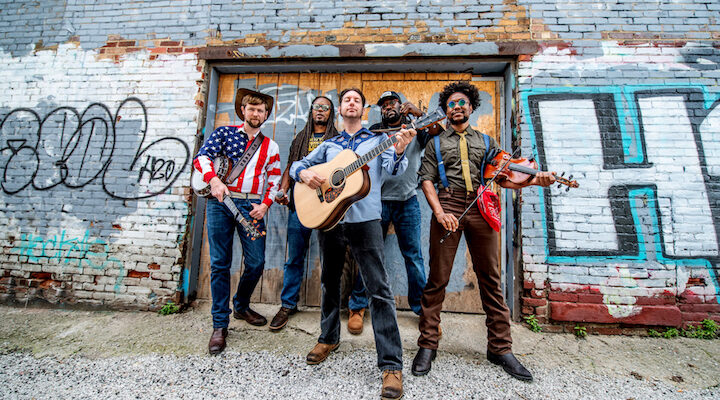 The Return of Congregation & Celebration – Thanks to Gangstagrass

Sometimes a band is just that: a group of musicians who legitimately banded together to create music. We love them and we appreciate them. Other times, though, such as in this case, a band is more than that – they are a brotherhood of groundbreakers and the building blocks of an artistic community. These bands, like Gangstagrass, are irrevocably adored by us and many more.

For those unfamiliar, Gangstagrass is a band that takes one look at the sides of the box people put them in as individuals and tears them down as a cohesive unit. This unit is harmonious and lively, sharing a new kind of music with the world and entertaining the masses along the way. Sleevs Emily Messner, known as Sleevs, manages the group, which consists of Dolio the Sleuth (MC and vocals) and R-SON the Voice of Reason (MC) from Philadelphia, Rench the Mastermind (vocals, guitar, and beats) from Brooklyn, Brian Farrow (vocals and fiddle), and Dan “Danjo” Whitener (vocals, banjo) from Matawan, New Jersey. Each one of the members of Gangstagrass hold their own when it comes to their talents, instrumentation, and personal taste – all of which remain intact and shine through within the five-piece. However, it is their original music and stage presence, as well as the genuine feeling one gets by simply reading the following interview, that showcases that their roots go further than location and run deeper than just bandmates.

The last feature we did on Gangstagrass came out in January of 2020… and to say a lot has happened since then would be an understatement. For you, though, as a band, what have the last two years been like?

Dolio: It’s definitely been a period of adjustment, reflection, and adaptation. We’ve found new ways to keep in constant communication, and in many ways have drawn each other closer. We formed and maintained our bubble, and have gotten more creative in keeping in touch with our supporters through using technology. Some good art has been created, and lots of bonding throughout this global ordeal. Mental health and stability have also become greater priorities.

Danjo: I became a father in the second half of 2020, so for me everything with the band and COVID has been affected primarily by that. I always knew I wanted kids, and I knew it would be a challenge to navigate becoming a parent and being a musician, but I never knew it was going to be like this! However, I’ve been deeply thankful to have such wonderful dads as peers in this group and to have watched them raise their kids while maintaining music careers for so many years.

A massive part of what makes Gangstagrass, Gangstagrass is the on-stage shows, the music that fills all your senses, and the living in the moment aspect of it. It’s been an odd time to be part of the live music scene, though, unfortunately. Has your appreciation or expectations for being such a dynamic live band changed at all?

Dolio: The appreciation has increased, actually. When the prospect of doing this thing that you enjoy so much, with some of your favorite people, suddenly vaporizes, it’s traumatizing. It forces you to figure out a way to make it work, which is what we’ve done through making various changes in these couple years in the way we operate. The scene has changed tremendously, but we’ll do everything we can to ensure the safety of our families and our audience while sharing this art. I feel like we’ve taken the angst that comes from how much we’ve missed doing this, and channeled it into delivering even more impactful performances when we do get the chance to see folks. We’ve definitely been going harder in the studio and experimenting more.

Danjo: In a way, yes. While I always tried to appreciate what a profound opportunity it is to play live with this band, this separation has shown our ability to thrive in adversity in new ways. We recorded our album in isolation, with a level of confidence you can only get by performing together as long as we have. We performed on live TV after a one-year hiatus. These things wouldn’t have worked without our group experience, and I’m so thankful for that.

We saw you shine so brightly on America’s Got Talent, so we have to ask, what did that experience teach you, if anything at all?

Rench: It was a great chance to reflect on our messaging and refine what we are really trying to tell people. When you have two minutes to show what you are about, you have to work out what’s important and make every second count.

Dolio: It was the first time we got to see how an enterprise-level operation functions. There are so many moving parts to a production of that size and seeing them work was such a learning experience. Everything is so precisely timed and rehearsed, to the point that AGT was more of a clinic on how to step your game up to the next level. We’re thinking on a much larger scale now, especially since we know that this is connecting with so many people outside of the niche we’ve carved out. The positive feedback we’ve gotten from the audience at large was encouraging, since our biggest hurdle has always been “How do we get eyes and ears on this thing we do?”

R-SON: It taught me that we know ourselves and what we do better than anyone else does and that we need to stay true to that.

Danjo: Really, it was a reminder that what we need most is exposure! Nobody has ever seen anything like us, so getting to perform in front of millions of people is a huge opportunity for us.

You promised to us in our last conversation that a Gangstagrass show is where you will always find something you haven’t seen before. Now we already know your live shows are riveting, but for people who have yet to see that first hand, does that sentiment still ring true?

Dolio: Yes! Nobody does what we do, but most of all, the folks that come together to share this experience we host are unlike any collection of folks you’ll see anywhere else. All ages, backgrounds, you name it. A Gangstagrass audience seems more like a congregation and a show feels more like a celebration. We’re sharing an experience together, and this energy exchange is life-affirming. We’re sharing not only the love of this music, but the love that inspires the music.

Rench: Absolutely. Even if you have seen us before! Every show there are spontaneous moments and new things we are trying. We are sharing our excitement with the audience to be discovering what is possible with this idea.

Danjo: It’s not just seeing us when you come to a show – it’s the other audience members. It’s the opening act. It’s our featured performers. In a sense, you come to our show to see yourself.

Sleevs: Witnessing the reactions of people who have never seen Gangstagrass live is one of the best parts of touring. By the end of the very first song, that initial skepticism has entirely given way to dancing, cheering, jumping up and down, it’s amazing! And the effect lasts beyond the live show, into folks’ daily lives. A whole community has been created by this band among people who – because of where they live, or how or when they grew up, or their divergent political views – might not have met any other way. At every single show there are people in our audience who bond with each other over this experience, see the shared humanity in each other across their differences, and become real friends. It’s just so uplifting and gives me faith that we can all make it through these difficult times, together.

South Orange Performing Arts Center is hosting Gangstagrass very, very soon and there is so much excitement buzzing about it. What do concerts like these, ones where hundreds of fans are coming out and there is a lot of anticipation, mean to you?

Rench: We are so excited just to get the chance to perform more, we’ve been missing it so much. Every show is a thrill for us. We know this is going to be an amazing venue, so that adds to the anticipation, to think about getting to perform with really good sound, in a really good space. That brings an extra level of excitement to it.

Dolio: It means I get to rock out with my favorite people again, and share that energy with folks all over again. I can hardly wait!

Danjo: For me especially, since it’s a local show – I live in Matawan, NJ –  it means a lot. This represents the fruit of all our labors, after we’ve toured all over and made a name for ourselves, and it’s really nice to come home to that reception.

The camaraderie within the band is so special. You all balance each other as people and as artists. What does it mean to you to have such a supportive and dedicated circle of creatives working with you?

Rench: The formula for what we do requires authentic hip-hop and bluegrass elements, so it’s important that we have people that are really bringing the heart of these traditions to the table – but it also has to be an authentic collaboration and that is so key. This wouldn’t be what it is without the real connection we have developed, to explore together, challenge each other, and bring out the best in all of us.

Dolio: I’ve known these guys for so many years, and we’ve shared so much together that I can’t imagine NOT working with them. I have genuine love for every one of them, and look forward to many more adventures and fellowshipping with them. The fact that we create awesome art together is just a reflection of that bond.

Danjo: If I lost everything else, every other part of what I do – and these days sometimes it feels like I have! – I would still have this group of collaborators and peers, and that would be enough.

Gangstagrass is a frontrunner in terms of throwing genres out the window and instead putting tasteful, fun sounds into a blender to create something that is intriguing and new and entertaining. More and more artists are letting genres fall to the wayside, too. How does that make you feel in terms of the future of music, one that Gangstagrass is so evidently inspiring?

Rench: I’m excited to see so much experimentation and evolution. We have had the chance to meet and collaborate with many others who are ready to transcend the segregated genres we have been put into. It’s exciting to see our friends challenging the image of country music – Rissi Palmer, Amythyst Kiah, Kaia Kater, and so many more – it does feel like a critical moment for breaking down the old boundaries. This is a great thing for the future of music.

Danjo: I hope that everyone is following their passion. For me, that’s making music inspired by traditional bluegrass and blending it with other things. So I don’t mind what people do with genres, but most importantly they should feel free to do whatever it is they want to do. Genre should never hold anyone back, but we draw so much inspiration from our traditions; if they can support us, I think that’s great too. Don’t throw it away if it’s an important part of you, but don’t be afraid to break rules!

Dolio: I think it’s awesome. The world is so much better when you can taste all the flavors. We’re gonna keep on cooking, come get a taste!