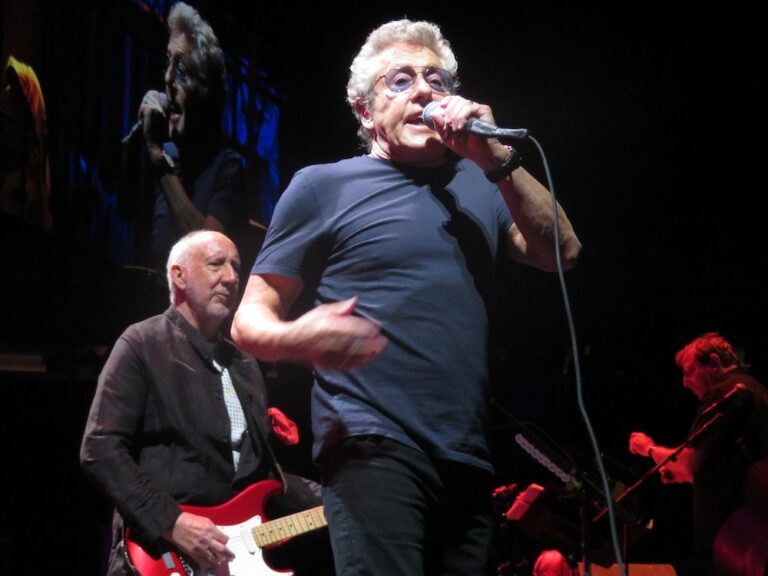 The Who today announced The Who Hits Back!, a 29-date tour with the initial segment in April and May and a second in October and November. The New York City area shows happen at Madison Square Garden on May 26 and the UBS Arena on October 7. Original members Roger Daltrey and Pete Townshend will be accompanied by guitarist Simon Townshend, keyboardists Loren Gold and Emily Marshall, bassist Jon Button, drummer Zak Starkey, backing vocalist Billy Nicholls, along with an orchestra led by conductor Keith Levenson, lead violinist Katie Jacoby, and lead cellist Audrey Snyder. “Pete and I said we’d be back, but we didn’t think we’d have to wait for two years for the privilege,” Daltry said in a statement. “This is making the chance to perform feel even more special this time around. So many livelihoods have been impacted due to Covid, so we are thrilled to get everyone back together – the band, the crew and the fans. We’re gearing up for a great show that hits back in the only way the Who know how, by giving it everything we got.”

Skip Marley announced on February 4 his first US headline tour alongside the release of the Let’s Take It Higherdocumentary. The “Change” tour will begin on March 20th in Tampa, Florida, and will make stops in New York, Atlanta, Chicago, and more before concluding in West Hollywood, California on April 27th. Gramercy Theatre on March 28. Of the tour, Marley states: “Excited to finally bring the music to the people. This tour marks a change for the better.”

Sofi Tukker announced on February 4 the Wet Tennis tour, which will start on May 21 and continue for 17 dates through the US and Canada. The band will perform locally at the Brooklyn Mirage on May 25. The duo’s album, Wet Tennis, is due for release on April 29. This second album comes four years after Sofi Tukker’s 2018 Grammy-nominated debut album Treehouse.

Rivers of Nihil announced on February 3 a headlining spring tour with support from Fallujah, Alluvial, and Warforged. The U.S. leg of the Terrestria World Tour begins May 6 at the Market Hotel in Brooklyn and runs through June 5. Rivers of Nihil will be touring in support of their 2021 album, The Work. The tour continues in Europe in 2023.

In January, slowthai teased his new live show with a surprise $1 show at Baby’s All Right. On February 2, slowthai announced his 2022 North American Antisocial Roadshow tour. The seven-date run will begin at Webster Hall on April 8 and will travel through April 30.

Following postponements in January, Vincint announced on February 2 the rescheduled dates for his first-ever U.S. headline tour. The Getaway Tour begins May 5 and ends May 29, with a local date at Irving Plaza on May 24. Next week, Vincint will select local emerging LGBTQ artists as support for every city on The Getaway Tour and reveal these names on his social media. “I’m an independent artist and I know first-hand how much it means to be given a shot!” Vincint said in a statement. “So the choice is yours! I’m picking one of your favorite LGBTQ+ artist from each city on the tour! I’m so, so, so excited for my first headline tour and want to open my stage to one of you.”

The Weather Station played Jimmy Kimmel Live! on February 3, marking the band’s late-night television debut. This appearance precedes the release of the band’s How Is It That I Should Look at the Stars album on March 4. This appearance launched a delayed North American and European tour, which now starts on February 12 and includes a rescheduled show at the Music Hall of Williamsburg on April 26.

The following concerts also were announced in the past week:

They Might Be Giants announced on its website on January 24 that it postponed the spring portion of its tour for the fifth time in two years. This includes five sold-out shows at the Bowery Ballroom in March and April, for which new dates will be announced. So far, the August 30 and 31 shows at Asbury Lanes are still on. “Out of uncertainty due to the Omicron variant and in consideration for the health and safety of all, we are rescheduling all of our Spring 2022 shows to the summer and fall and probably into 2023, starting in June,” reads the notice on the website. “After active and evolving discussions with our management and booking agent, we have come to the difficult conclusion that no matter our best efforts, we could not realistically assure a performance setting with the protocols needed to keep everyone safe this spring. We also could not expect to maintain a sustainably safe environment for two-plus months as a traveling band and crew.”

In January, Circa Survive canceled the first month of its tour, including a date at the Starland Ballroom. The tour was to have a delayed start in February and include a show at Brooklyn Steel on February 27. “It breaks our hearts to announce that we are officially cancelling the BSN Anniversary Tour,” the band announced on social media on February 4. “This includes the dates that were being rescheduled for the summer as well. There are multiple factors at play here but most pressingly Anthony is currently struggling with a mental health crisis and unable to be on tour at this time. A focus on self and family is of the utmost importance right now; therefore, postponing or rescheduling any further doesn’t feel like the right thing to do. We’re absolutely devastated over this and feel awful for everyone it affects. We hope you will accept our most sincere apologies and regrets with this news and the last-minute nature of this announcement.”

The Cribs announced on January 25 the cancellation of its tour, including the February 21 date at the Gramercy Theatre. “We are very sorry to announce the cancellation of our upcoming USA/Canadian dates. This was a really tough decision for us, and we tried everything we could to make it work – but we are realists. We have been grappling with this dilemma whilst trying to prepare for tour, but having both Ross and Ryan test positive recently, just really brought home how difficult it would be to play these dates at this time.”

At press time, rescheduled dates were unavailable for the following newly-postponed or canceled concerts:

CLICK HERE FOR THE FULL ARTICLE AND PHOTOS BY EVERYNIGHT CHARLEY!