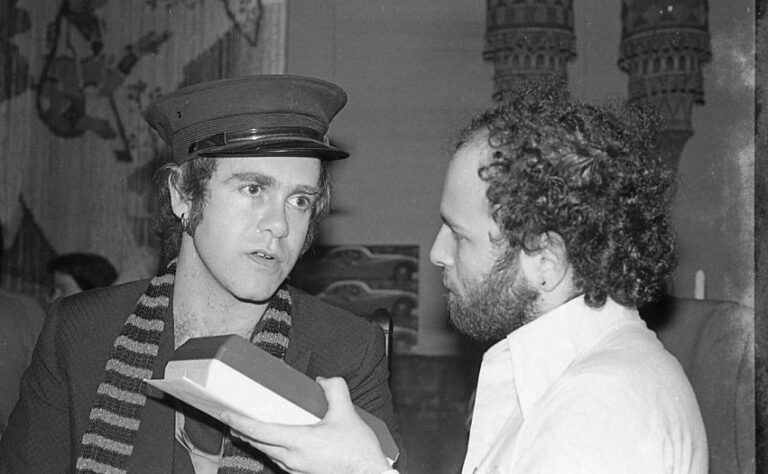 When Rocket Records threw a New York City party in 1978 for Sir Elton John’s A Simple Man album, they had the star roped off at a table enjoying a fine meal while us press geeks gawked and groused at the lack of access.

The whole scene was just too frustrating. It was a different world back then. John Lennon was still alive. Armed with my trusty tape recorder, and remembering my mandate, I waited for the right moment, heart beating out of my chest, before making my move. Sliding underneath the satin ropes, I got to my knees right next to Elton, surprising the star, and putting my tape  recorder on the table next to his braised duck entrée. I held my breath, asked my first question, did not look anywhere except into his rather bemused face. He turned out to be a gentleman of the highest rank: patient, understanding, maybe even a little impressed at my impetuosity.

Looking back now, 44 years later, I find it hard to believe what my first question was.

“Not at all. I’m retired from the stage. I just don’t have any adrenaline left, no hunger.”

I was amazed no one was telling me to leave him alone yet.

“What have you learned about super-stardom?”

“To enjoy it. And not give a damn about whatever anybody else says.”

Amazingly enough, Elton looks me in the eye, lays a hand on my shoulder, and asks me my name. When I tell him, he softly says, “y’know Mike, I went through a period a few years ago of total self-destruction. I didn’t even realize I was clinically depressed. The drugs were only the start. It’s why I don’t tour anymore. I would’ve been one of those dead rock stars but I’ve got the kind of friends who just won’t let me get away with anything. They’ll tell me to my face when I’m being an idiot or if I’m misbehaving. They’ve been my friends for 10 years and thank god they still are. Who else is going to tell you if you become a monster? It saved my life.”

“Who’s your closest friend in the business?”

“What about John Lennon?”

“I know him very well and love him but I haven’t seen him for a couple of years. Ringo too. I think I understand John. I met him in ’74, and when he sang with me at the Garden that night, I was the one who actually reintroduced him to Yoko backstage after he had been in Los Angeles for six months. Since then, he hasn’t done a bloody thing. Hey, it’s none of my business, right? He’ll know when to come back or if he’ll ever even want to come back. He very much wanted to have his kid because Yoko had so many miscarriages and when they had their son, Sean, it was so nice. He’s spent so much time with the baby that that’s what I guess he’s doing now: being a father, bringing up his son. I can’t blame him for that at all.”

“Rod Stewart and I want to do this movie together about two singers who get on very well with each other but who are very envious of each other. Just like real life. We’ve always had our little confrontations and jealousies – and I’d like it to be a really accurate rock film that portrays what actually goes on.”

As Elton turns to a female companion sitting next to him, I am quickly ushered away by security without getting to say goodbye or thank the man for being so gracious.