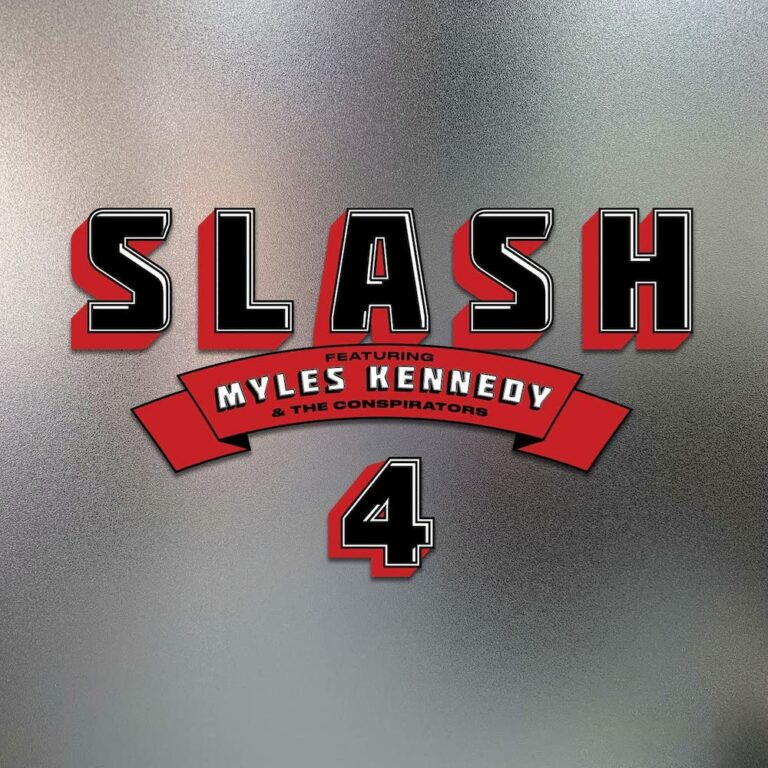 Drown In The Paradise That Is ‘4’

Slash’s latest project proves that his craft, much like himself, is, as the phrase goes, aging like fine wine… if fine wine was the depiction of raw rock and roll.

Thunderbirds rev their engines waiting for the flag to be lowered, but only one can win the race. Undeniably, the winner of this competition is Slash featuring Myles Kennedy and The Conspirators (SMKC). “The River Is Rising,” off of this new record, sets the tone for the whole package, which is simply titled 4.

They return with a solid album jam packed with soaring vocals, unforgettable melodies, large choruses, and riffs that will blow your mind. It’s everything that you would expect from them and then some. SMKC approached this project differently by recording live. This method created a certain kind of magic that can be heard and enjoyed throughout. Slash has previously said, “It has a very spontaneous, fun kind of thing to it, and I love that. It’s the sound of the five of us just jamming together in one room.” The band consisting of Slash, Myles Kennedy (vocals), Brent Fitz (drums), Todd Kerns (bass, vocals), and Frank Sidoris (guitar, vocals), has created something special.

To create 4, Slash and the band traveled across the country in a bus together to Nashville, Tennessee, and recorded the new album at the historic RCA Studio A with producer Dave Cobb (Chris Stapleton, John Prine, Jason Isbell, Brandi Carlile). This is the first release on the new imprint Gibson Records, in partnership with BMG.

As previously mentioned, “The River Is Rising” starts things off with a bang. This song was written during the pandemic and, based on the tenacity and desperation, it’s easy to see why. Slash gets real with how the double-time part was something that he came up with at the end of the arrangement. Their producer suggested that he add it right after the breakdown too and the result is nothing short of amazing.

“Whatever Gets You By” has a sinister feel to it with a solid instrumental backbone to match. It’s the ultimate kiss-off track. “C’est la vie” follows and the wah-wah is fierce with this one. It’s one of the shining stars on 4 as the lyrics speak to me on so many levels. The stellar guitar solo and meteoric vocal runs only solidify this statement.

“The Path Less Followed” is an anthemic headbanger guaranteed to be a fan favorite. Then comes the bluesy rocker “Actions Speak Louder Than Words,” a track that speaks the truth with groove, while “Spirit Love” is a supernatural song infused with a raga-rock quality.

Slash made the seventh song here the record’s second single. Titled “Fill My World,” it is also the most sentimental and heartbreaking. (“Turn the key. Please come back to me. What I’d give to know you’ll fill my world again,” the lyrics ring out. They continue with, “The wind is screaming out. I pace the floor. And I wonder, will I see your face once more?”) The backstory is even more touching as the beginning to this song has a Guns ‘N Roses feel accompanied by Kennedy’s flawless voice – a voice I’ve been listening to since his days fronting The Mayfield Four. ‘Fill My World” is a testament about cherishing the ones you love.

Next up is “April Fool” and it’s nothing but awesome. Seriously, I’m not pranking you. The meaning is reflective and the sound is cohesive. “Call Off The Dogs” blazes through with a ridiculously cool bass line. The swan song on 4 impresses – “Fall Back To Earth.” This is the yin to the yang of “River Is Rising,” if you look at it as an intro and confusion… and what a way it is to end an album!

Whoever said that “rock is dead” recently needs to have their head checked. It is alive and well here on 4. In fact, I will go out on a limb and predict this album will earn a spot in the category for Best Of 2022 and Album Of Year contender for many – myself included.

Slash featuring Myles Kennedy And The Conspirators are on the road for their North American headlining tour and are hitting 28 major cities before wrapping up March 26 in Orlando, Florida. Their local date for you to hear grand moments of this record live? The Beacon Theatre in NYC on Saturday, March 12!