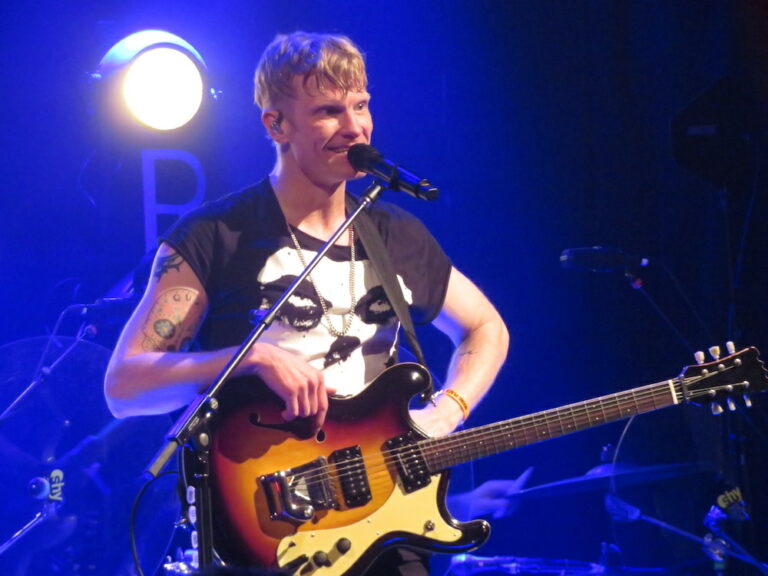 Midway through the Mother Mother concert at Irving Plaza, bandleader Ryan Guldemond asked the audience how many in attendance were seeing the band live for the first time. Nearly everyone in the sold-out venue shot their hands into the air. He then asked how many had seen the band before. A few scattered hands here and there were raised. He asked, “Where have you all been? We have been coming to New York for better than 15 years.”

Indeed, Mother Mother launched in 2005 in Quadra Island, British Columbia, and has performed consistently throughout the continent since then. The band’s most recent New York performance was a sold-out show at the Gramercy Theatre in early 2019. Starting in late 2020, however, Mother Mother’s visibility skyrocketed when songs from the band’s 2008 album, O My Heart, went viral on the video-sharing platform TikTok. No particular event caused the surge in streams, yet “Hayloft,” “Arms Tonite,” and “Wrecking Ball” accompanied plentiful homemade videos including cosplay and gothic fashion. Mother Mother’s music resonated in particular with young non-binary communities, as numerous users used the band’s music as a soundtrack while discussing gender-related topics.

At Irving Plaza, the audience demographics were overwhelmingly female 20-somethings. Whenever Guldemond spoke between songs, the highly-engaged fans responded with cheers, giggles, or applause. While the cheerful buoyancy of both the band and the songs were more than appropriate for this demographic, Guldemond, vocalists/keyboardists Molly Guldemond and Jasmin Parkin, bassist Mike Young, and drummer Ali Siadat offered more than simple pop songs. Each song was a complex composition in which the trajectory often led to somewhere unanticipated. A song hit a groove and, just when it grew comfortably familiar, it suddenly broke into something more curious. Thoroughly indie by nature, the quintet masterfully handled the somewhat quirky yet appealing curves in its music.

The repertoire highlighted Mother Mother’s pivotal O My Heart album as well as the band’s eighth and most recent studio album, Inside, released on June 25, 2021, and its expanded deluxe version, released on January 28. The set list included a few songs from four other albums as well. Hence, the song selection spanned the band’s recording career.

The animated presence of the three focal points, the Guldemond siblings and Parkin, fueled the live dynamic. This front-line trio’s constant movement ensured that the performance was as visually stimulating as it was musically alluring. Between songs, Ryan endearingly and effusively expressed the band’s gratitude for the audience’s support, repeatedly labeling the fans as family, and promised that the musicians would continue pouring themselves into the performance. The appreciative fans reciprocated by delving deep into the musical moment. The evening was win-win all around.