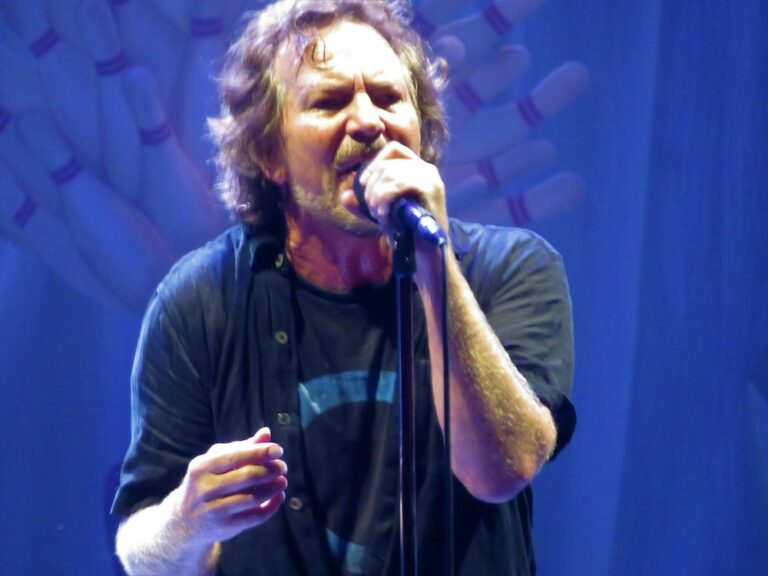 Eddie Vedder & the Earthlings at the Beacon Theatre / February 3, 2022

In 1990, Pearl Jam quickly became a world-class rock band largely due to Eddie Vedder’s singular vocal styling. Vedder’s expressive baritone is a combustible mix of high-testosterone masculinity and wounded angst. Distinct and compelling, he could sing the theme from Gilligan’s Island and make it sound memorable.

Fortunately, that song was not on the set list at the Beacon Theatre. Instead, Vedder sang 10 songs from his third and most recent solo album, Earthling, 10 cover songs (including three Pearl Jam songs), and two songs he contributed with Glen Hansard to the soundtrack for the 2021 film Flag Day. The numerous covers kept returning the audience to the familiar, even if the listeners had never before heard Vedder sing these songs.

The pairing of Vedder and Hansard was genius. Like Vedder, Hansard has a robust voice that literally screams his vulnerability. Hansard opened the evening with an approximately 20-minute set in which he demonstrated how appropriate a holler can be, given the right song. After intermission, Hansard returned as one of the Earthlings, along with guitarist Andrew Watt, keyboardist/guitarist Josh Klinghoffer, bassist Chris Chaney ,and drummer Chad Smith.

Vedder opened his set with covers of R.E.M., Tom Petty, and Beatles songs. In each case, the song was recognizable, yet Veder’s hearty vocal interpretation seemed to send the song into a parallel universe. These songs were followed by Vedder’s songs from Earthling, an album that will be released on February 11. On this night, the first of two sold-out concerts in New York City, Vedder and the Earthlings added a song to their repertoire with the live debut of “Power of Right.” The show ended with six more covers.

The Earthling part of the show was where the performance lost some of its traction. The audience would have loved for the new songs to have been as remarkable as the voice that sang them. The band worked them hard, especially when Watt bombastically ripped into flashy, extended leads. On “Try,” Vedder called Danny Clinch from the wings to infuse some harmonica blasts into the song. The set ranged from hard to soft, fast to slow, and gentle to intense.

While a more youthful Vedder set rage to hard-hitting music in Pearl Jam, this was a more comfortable and mature Vedder reflecting his later life’s journey life in a less volatile and more adult manner. It was not bad, just rather tepid and void of identity compared to the catalog of music Vedder has created in the past. To his credit, Vedder was not interested in making this a Pearl Jam junior band. The Earthlings and the new music was Vedder’s attempt to show another side of himself. Ok, we have seen it. We just wished that the material was as special as the voice that sang it.