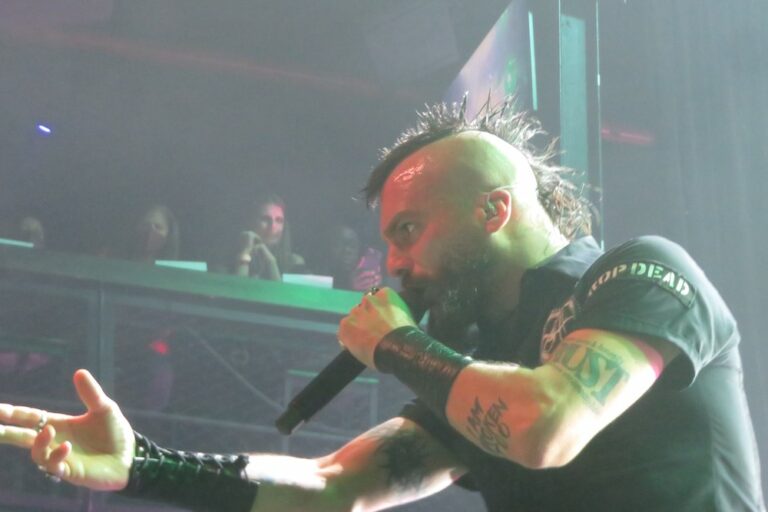 Shortly after forming in 1999 in Westfield, Massachusetts, Killswitch Engage became one of the leaders of the burgeoning metalcore movement. The band stood out by balancing brutality and finesse, avoiding the extremes of other bands in that genre. This led to sales of more than four million records.

Following well received sets by Light the Torch (featuring former Killswitch Engage vocalist Howard Jones) and August Burns Red, Killswitch Engage took the stage at Terminal 5 and proceeded to deliver the thunder. The band was one person short, however, because a few days earlier Joel Stroetzel tested positive for COVID and returned home. August Burns Red guitarists Dustin Davidson and JB Brubaker joined Killswitch Engage on stage briefly, but mostly the band played as a quartet rather than as a quintet.

Rather than emphasizing the most recent album, Killswitch Engage’s performance at Terminal 5 was a retrospective, drawing from seven of the band’s eight albums. Viewing the show with 2012 eyes, metalcore seems like a limiting and insufficient brand for the music that the band performed. Yes, we heard chugging guitars, savage rhythms and screaming vocals. Especially in comparison to August Burns Red’s performance a bit earlier, though, Killswitch Engage’s more accessible music sounded closer to the classic metal sounds of Judas Priest and Anthrax. Aggression and intensity ruled, as Killswitch Engage brought the roaring riffs, heavy grooves and fierce crunch. Strong vocal melodies softened the intensity. In a moment of Valentine’s sweetness, Leach dedicated a more tender song to his fiancée in the balcony.

The concert concluded with two past and present vocalists for Killswitch Engage sharing the stage and singing together. Jones, the vocalist from 2002 to 2012, and Leach, Killswitch Engage’s original and current vocalist (1999-2002, 2012 to the present) shared vocals for the final three songs. The finale was “The Signal Fire,” a song on which Leach and Jones traded lead vocals on the Atonement album. For longtime fans, it does not get better than this.