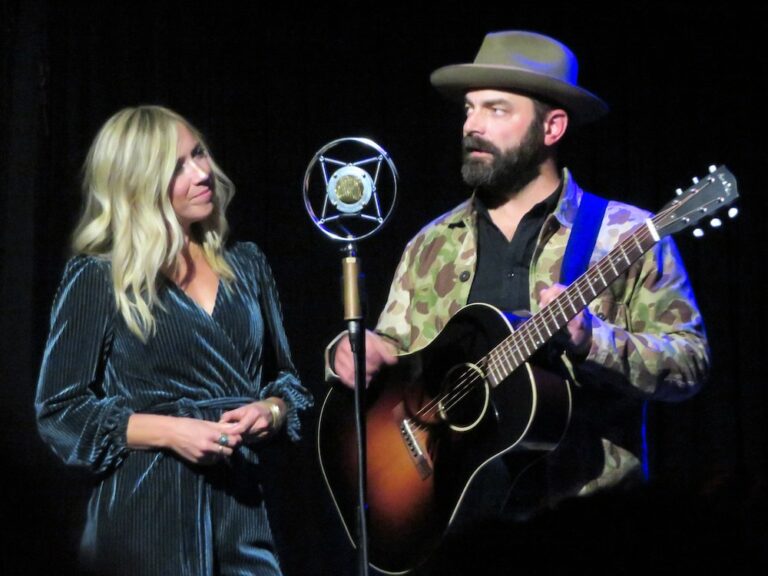 Drew Holcomb began his musical career as a solo act, recording his debut EP in 2003 in his native Tennessee. He met Ellie Bannister, daughter of producer-songwriter Brown Bannister, while attending university. Together they founded what would become Drew Holcomb & the Neighbors in 2005. Drew and Ellie married in 2006. In 2012, Ellie stopped touring to take care of their first child and found success with solo recordings. The You and Me Tour: An Evening with Drew and Ellie Holcomb is the first time in a decade that the Holcombs toured together, briefly leaving their three children home in Nashville.

Dividing two sets with an intermission, Drew and Ellie sang solo and duets for about two hours, drawing from solo and group albums and possibly as-yet-unrecorded songs. The chemistry of their personal relationship parlayed into their intertwined singing. They are still in love and it showed in their tender lyrics and in their understated vocal dynamic, whether they sang in unison or tag teamed.

Drew and Ellie sang like life is always a celebration. “Hey Rivers,” for instance, recollected humorous moments raising their young son, Rivers. Ironically, even a Neighbors song entitled “End of the World” made an apocalypse more festive than concerning. From start to end, Drew & Ellie Holcomb created an inviting, intimate setting for their music. The duo comfortably welcomed the listeners into the Holcomb household with personal anecdotes and an informal presentation. When Drew and Ellie harmonized on “Feels Like Home,” they sang with such warmth and amity that it felt like the audience was indeed at home with the Holcombs. Few concerts are as wholesome and homey as this one was.