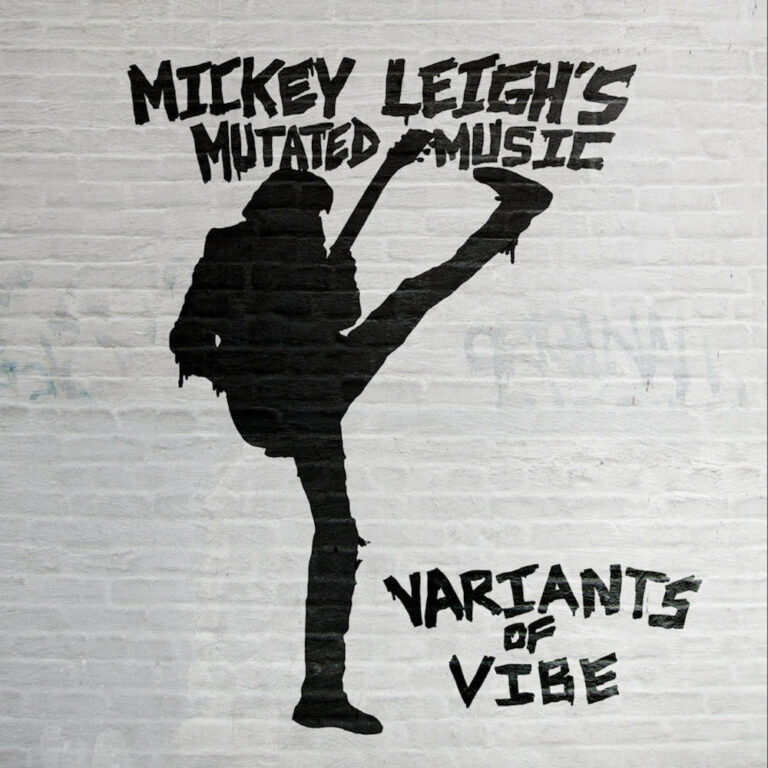 Mickey Leigh has been an integral part of New York City’s music scene for decades. He’s seen it all and done it all, with the exception of one thing – a solo album. Thankfully, Variants of Vibe has righted that wrong.

Rocker Mickey Leigh is joined by long-time collaborators Pat Carpenter on drums and Westley P. Crawford on bass. The album was produced by Leigh, recorded by Matt Chiaravalle and Tim Phillips at Mercy Sound NYC, and mastered by Tim Phillips. The album, released on Little Steven Van Zandt’s amazing Wicked Cool Records, has 14 songs sure to make you move, groove, contemplate, and believe in the power of rock ‘n roll. There are dashes and splashes of Elvis, The Ramones, and Tom Petty, but it’s Mickey Leigh through and through.

He explains, “Like every organic entity, music is perpetually re-adapting itself in order to survive = mutating. As we know, things we create also variate as they mutate. Mutated Music is what we are. Our new album presents a Variant of Vibe. This may sound complicated, but, it’s only rock n roll. and we love it and don’t want to see it become extinct! Mutated Music = Rescuing Rock ‘n Roll, One Song At a Time.”

“Little Cristine” gets the party started. The clap-along ditty applauds a guy and his girl having fun. Remember fun? It’s the perfect introduction to the no-nonsense joy provided by Mickey Leigh’s Mutated Music.

“It Felt Like Love” and “Trouble Man” follow with jangly goodness. “No Fun Anymore,” the first single and fourth track on Variants of Vibe, is accompanied by a humorous video spotlighting the obsession we have with social media. Mickey reflected on its meaning by saying, “It’s not uncommon for songwriters to steal bits and pieces from either their musical contemporaries or past influences. Not that I’m a big fan of his, but I decided to steal a line written by an old Roman Emperor. ‘Veni, Vidi, Vici’ = I came, I saw, I conquered,’ said Julius Caesar. The Queens interpretation – or, at least, mine – is: ‘I came, I saw, you’re no fun anymore.’ Whatever it might be: if you realized something was a danger to you and left it behind -before it kicked yours – fair to say you ‘conquered’ it. In this song, it’s a healthy conquering. You came and saw it was time to conquer that demon. Don’t sue me, Caesar!”

Up next is the psychedelic earworm, “Go Home Ann,” and “Spanish Eyes” and “Loneliness,” the sixth and seventh offering respectively, are compassionate in contrasting ways – one is reflective of first love, while the other is brimming with lament. “Stories That Never Got Told” has a chorus reminiscent of “Love’s On Fire” by Tommy Conwell & The Young Rumblers. I love every second of it!

“Standing in the Dark” and “I Got a Message for You” are upbeat and make you get out of your seat and shimmy. Yes, I did the mashed potato and the swim to both. (No video is available at this time, sorry folks.) ”When the Truth is on Trial” is poignant, while “Brave Old World” is cheerful. “Brave Old World” is infused with the Asbury Park sound and is one of the many show-stoppers on the album. “Lost in Space” takes you on a trip to Mars in a punk UFO. “La La Lala” ends with rebellion and snarkiness anyone with a sense of humor will adore.

In addition to Variants of Vibe, Mickey Leigh is the executive producer of the upcoming Netflix movie based on his book, I Slept With Joey Ramone: A Memoir. The book is based on his experience growing up as the brother of Joey Ramone in Forest Hills, Queens. The movie stars SNL‘s Pete Davidson as Joey Ramone.

Go to the Church of Rock ‘N Roll and get baptized by Mickey Leigh’s Mutated Music. I promise you’ll be resurrected after you listen to it!

VARIANTS OF VIBE, THE NEW ALBUM BY MICKEY LEIGH’S MUTATED MUSIC, IS OUT TODAY ON WICKED COOL RECORDS!