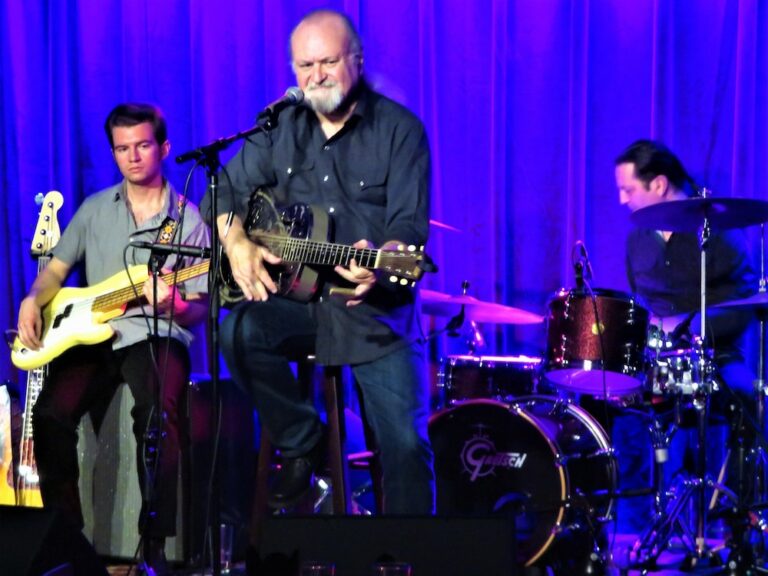 More than likely on this night, Tinsley Ellis forfeited some of his potential audience due to both the Super Bowl and inclement winter weather. Nevertheless, he graciously traveled to the Loft at City Winery with his rhythm section to play the blues for less than 50 fans. Facing obstacles might be routine for Ellis, who tours fairly constantly, performing upwards of 150 concerts each year. Maybe these ups and downs feed into his art, because his music sounded like heartfelt, passionate music rather than derivative echoes of blues.

Born in Atlanta, Georgia, and raised in South Florida, Ellis was seven years old when he sat before the family television set in 1964 and watched the Beatles perform live on The Ed Sullivan Show. This experience prompted him to learn to play guitar. His love for electric blues started second hand by listening to British Invasion bands. Ellis then sought out the root inspirations. Even now, more than 50 years later, his face brightens when he mentions Muddy Waters or Howling Wolf. Never becoming famous, yet never surrendering his first love, Ellis remains committed to being a blues guitarist.

Ellis is touring to promote his 20th album, Devil May Care, released on January 21. Fortunately, Ellis has written more than enough original material so that he does not play many cover songs. The few covers he plays pay tribute to his legendary forbearers in the blues. The axis of Ellis’ performance was not about reliving the glory days by playing standards, it was about putting into play all the signature skills he has cultivated on his six strings.

Backed by Andrew White on bass and Erik Kaszynski on drums, Ellis sang original lyrics from his gut and in every song injected extensive leads on his solid-body electric guitars. A keen observer would see numerous techniques. Ellis’ right thumb would play the top strings while his index and middle finger would pluck the lower strings. Then his thumb would play the lower strings. His four long fingers occasionally flicked all the strings up, later flicking them down. In the latter part of the show, Ellis sat on a stool and played a resonator guitar, his left slide rolling a slide up and down the neck. None of Ellis’ techniques were about showmanship. Instead, Ellis was all about craftsmanship, mastering the sound he wanted to draw out of his guitars. Ellis’ prowess on the guitar was impressive.

Although many cities have dedicated venues for blues players, the genre is no longer as widely popular as it was 50 years ago. Thankfully, quite a few players, including Ellis, are keeping this music alive. Hopefully Ellis’ next appearance in New York City will not compete with major weather or sports events so he can draw a larger audience.