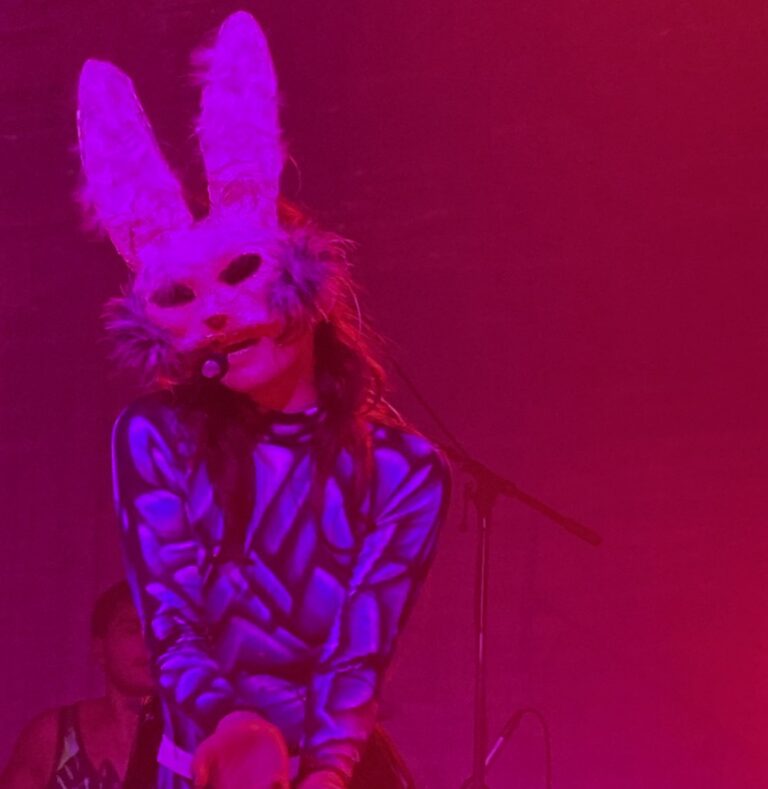 In their largest show ever played, Magdalena Bay guided the sold out Brooklyn crowd through their debut album, Mercurial World, in a gorgeously vivid array of color and sound.

The future-pop duo consists of Los Angeles-based Mica Tenenbaum and Matthew Lewin, who have been producing music under the Magdalena Bay name since 2016. In that time, Magdalena Bay have built a cult following from an impressive interactive online medium featuring Y2K style graphics that underlie the aesthetic of their entirely self-produced music. Their highly anticipated 2021 release of Mercurial World was met with rave reviews, offering a refreshing take on modern pop music that has undoubtedly begun cementing them as one of the best pop acts of this decade.

With the help of Chaeri, a nineties artificial intelligence inspired creation that displays its featureless face as one of the backdrops to the performance, Magdalena Bay started the show. Mica runs on stage to ‘wake’ Matt as they start to perform the opening song off the record, “The End,” which coincides with the introductory lyrics “Matt, Matt, wake up!” The lead singer wears a headset style microphone that captures the essence of early 2000s pop superstars; while the group as a whole wears coordinated outfits featuring quirky, colorful textures and shapes.

The studio-made synth-pop textures of Mercurial World translate seamlessly to Magdalena Bay’s live sound. Groovy bass riffs played by Lewin hit hard on the stage during songs like “Secrets (Your Fire)” and “Hysterical Us,” where Mica’s own Britney Spears-esque vocals are especially stunning throughout. She implements a granular vocal effect on the track “Follow The Leader,” which is hauntingly cool without adding on the bunny head-piece she puts on. The duo are also joined at this time by an old high school band mate on the drums named Nick. For the following numbers, the live drums are extra tight and complement the sound of Magdalena Bay superbly.

Serving as the backdrop to the performance was a collection of nineties computer style illustrations that are projected to make it feel like you’re in a fever dream. From a towering, chrome, buff figurine walking towards the adoring crowd to a purple sphere with determined eyes and sharp claws that the duo refer to as their lost pet in the music video for “You Lose!,” there is no end to the visual creativity that the act prides themselves on.

Throughout the set, Mica Tenenbaum would ‘speak’ to the AI Chaeri, questioning its existence, where at one point she asked the AI if it would self-destruct if they asked it to. In some way, Chaeri did self-destruct, the visuals near the end of the show glitched and stopped displaying. Without visuals, the sonic power of Magdalena Bay still shined, and the stage performance of the band remained wonderfully captivating.

It’s important to note how beloved Magdalena Bay is by their fans. This was highlighted when Mica crowd surfs on the closing number, a beat driven club song called “Good Intentions,” when she – almost on cue – was returned to the stage just at the end of the performance. It was if it were choreographed alongside the dance track.

The band played Mercurial World in full while at Elsewhere, and in tracklist order – a testament to how strong this record it is. The future of Magdalena Bay is bright and surely long lasting; I expect it to only flourish more in the future. Thankfully, this radiant duo will be returning to New York soon, as they are opening for Charli XCX, one of their biggest influences, on her Crash Tour. Get ready for that on April 22 and 23 at Hammerstein Ballroom.