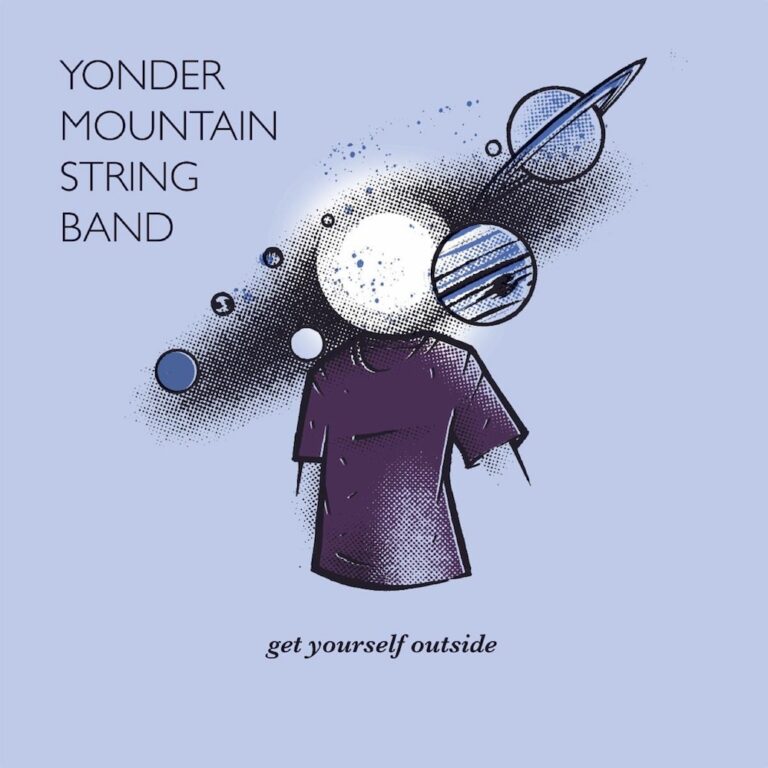 ‘Get Yourself Outside’ Is a Fresh Breath of Mountain Air

Yonder Mountain String Band’s latest album, Get Yourself Outside, is firmly rooted in the band’s earnest ethos while simultaneously stretching the beloved stringers toward higher peaks.

Outside, the dreamy new YMSB release, includes 11 tracks, most – if not all of which – were written via Zoom collaboration sessions. During shutdowns, the group pulled their remote work together to make Get Yourself Outside at Cinder Sound Studios in Gunbarrel, Colorado. There, John McVey engineered the album and co-produced it with YMSB’s own, Adam Aijala.

Nick Piccininni, YMSB’s 2020 addition, adds new layers with his contributions on the mandolin, fiddle, banjo, and guitar. If Allie Kral, Ben Kaufmann, Dave Johnston, and Adam Aijala were smoking before, they’ve caught fire now. Clean, polished, and pulled together plucks, picks, and pulls on Outside remind listeners how the group built their sting creds.

It’s hard not to appreciate the sheer excitement of the banjo after the first verse on “Up This Hill,” for example. Harder still, try to resist tapping along on something while enjoying the entirely instrumental track, “Out of the Pan.” The crispness of the fiddle and its impeccable timing demonstrates the band’s ability to land with uncanny deliberateness. Where other jam bands can sink into slumbery-slack sonic navel gaze-sh arrangements, YMSB consistently flexes, what seems like effortless, instrumental command. Each player is tight.

Naturally, themes about the outside (either metaphorically like, “getting outside the box” or literally, as in, going outdoors during a pandemic) come through in the lyrics on Get Yourself Outside. In “Small House,” the lyrics take on the psyche of being confined. “I Just Can’t” is more about not engaging in discussions with people who aren’t open to hearing other views. “No Leg Left” is an introspective exploration of what it means to be locked into one’s ways – even to their detriment.

“Change of Heart” features Kral’s meekly elegant vocals. The narrative element of the song makes it reminiscent of a country music ballad. It maintains the Yonder Mountain String Band quality of the sound with it’s upbeat musical interludes.

Get Yourself Outside is the band’s first album in five years. Surely, devotees will welcome its new textures and old craftiness. The signature light-hearted, well-composed, expert playing of the group has the presence fans have loved; while the addition of Nick Piccininni’s contributions pulls Get Yourself Outside to an even more engaging musical vista. Check out the album if you’re looking for their speedy twang artistry married with new fresh mountain grooves.

GET YOURSELF OUTSIDE, THE NEW RECORD FROM YONDER MOUNTAIN STRING BAND, IS OUT NOW WHEREVER YOU LISTEN TO MUSIC!