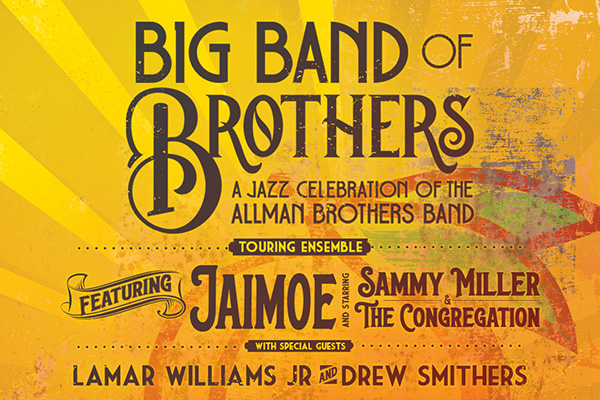 Jaimoe, Lamar Williams Jr., Drew Smithers, and Sammy Miller & The Congregation are The Big Band of Brothers, and this band of ‘brothers’ are taking brotherhood to a new level with the help of the Allman Brothers catalog.

Life is short and fleeting, but art is not. Art lives in infamy. Surely some art resonates stronger than others in different contexts, times, and places in the world, but at the end of the day, art is one of the few long withstanding mediums this world offers.

Art is what we learn from, live by, and love alongside. Lamar Williams Jr., the son of the Allman Brothers Band’s second bassist, Lamar Williams Sr., knows that better than anyone. This is why chatting with him about his personal and professional role in The Big Band of Brothers tour, coming to Rahway, New Jersey in just a few days, is such a riveting and impassioned conversation to dive into.

For people who are going to be going out to the one of these first couple dates, including the one in New Jersey, what do you hope that they get out of this show? Because it seems like it has so many wonderful layers for each attendee to uncover.

It does. For me, first and foremost with my affiliation to the Allman brothers band is Jaimoe. My dad, Lamar Williams, was best friends with him growing up in Mississippi playing jazz – that was their favorite style of music. So for Jaimoe to go through an amazing, amazing career, to say the least, and be able to come back full circle playing the music that he’s made a career out of, and in a jazz form, it’s such a joy to see happening. The show is going to be all about spirit and joy. It’s just a way of seeing him love what has happened for him musically, too, and for me to be a part of it has just been an amazing journey.

For people going, there is a youthfulness to the music still and I think that’s what is really cool about the Allman Brothers’ music. It keeps recycling itself. We now see younger generations in the band. They are younger people sprinkled out throughout the audience and band. This show speaks of the music that we’ve all grew up on and keep growing up from… in an artsy, cool, and jazzy way.

What I think this iteration of Allman Brothers music does is allow people to feel a renewed sense of joy in the song, but also, as you said, recycle their messages in the modern day.

Yes, definitely. You know, the lessons that people can learn from are in every song. You have to make your own interpretations of what’s out there and take what’s good keep it going. You open up to the art and you pour your heart into it. It comes out like that – smoothly. I really like seeing people take the messages and making them their own. With jazz takes on these folk songs, I feel like we’ve achieved that and we allow that.

Absolutely. I’m wondering with your history with the Allman Brothers Band, but also as an artist yourself, how you look at these styles of music – both the original roots rocking of the Allmans and the on stage versions you and the jazz-based orchestra are bringing to life. For both to be rooted in soul, what does that mean to you? What about soul music and the culture surrounding it then and now makes it so powerful?

I think jazz and soul are at the forefront of life at all the time. They never get old. It’s always new. Jazz is like the modern day hip hop. Modern day hip hop and jazz are very similar and their artists… they come outta nowhere. They made themselves outta nothing. They keep recreating it. I’m always intrigued to hear jazz and hip hop mixed together and sampled – let alone soul music which is just the essence of our spirit. I think soul music is in everything. You know, we put labels on things, but soul music is all music. It’s everything. It’s folk, it’s jazz, it’s country it’s rock, it’s everything. To me, people pour their hearts out into it and we hear ’em, you know?

100%. I think if we can celebrate that, such as at a show like this one, everyone should attend – because it seems that you’ll get something out of it whether you’re a previous fan of jazz the Allmans, both, or neither.

Definitely. Young or old, wherever you fall in the category of life, everyone will find something to get out of it. There is also just a joy found out of it. We played were playing the other day in Oregon. I think it was Eugene, Oregon, and there was this little girl off the street – Phoebe, beautiful name – just three years old. She was dancing with her little soulful vibe. We got her out to the show and to see her spirit come alive… oh my gosh, it’s there in everyone. It’s deep in your grandmother and your granddads to your cousins and the tiniest babies. You can think of it like that: how they all share the same spirit. Once you hear this music, it comes out of everyone.

Wow, and you also never know how you’re going to inspire someone – of any age. That’s why a jazzy take on these Allman Brothers classics only add to the charisma and wisdom that they already hold.

The Union County Performing Arts Center here in New Jersey are also set to include an Allman Brothers touring memorabilia exhibit to further emphasize their impact and their history. It’s this really cool display with a focus on not just the music, but the message and culture. In your eyes and with your experience, why is it important to keep memories and music alive? Whether it be the incomparable Allman sound or otherwise, why do feel that people should be holding onto somewhat historical art?

I think there’s nothing new under the sun. With the Allman Brothers, they’re lyrically, sonically, amazingly aware of the world from their standpoint. I think that history repeats itself and we, as artists, we write about the times. In our own ways, we are telling the story of the moment. They were there doing that, too, with the Civil Rights movements and the hardships of American life. We’re going through a different era right now, but it’s the same basis for society. For a band to be so powerful to mix Black and white together then, and to go out there and show the world that we’re all together, we are making music together, and we need to listen and be in unity with each other…. You know, there’s a brotherhood built in that. There’s a truth to the spirit of family and the love behind what they, and we, are representing […].

I’d be lost without that brotherhood. And there’s a sisterhood, as well! The Brothers and Sisters’ album was a real thing – my goddaddy and godmother are on the album cover right next to my dad. That was real. That was how they operated. That was who they were. I would just like to see the world being happy with each other and making the world better, together, to more of that unifying brotherhood now.

THE BIG BAND OF BROTHERS: A JAZZ CELEBRATION OF THE ALLMAN BROTHERS BAND COMES TO UPAC ON SUNDAY, FEBRUARY 27! FOR TICKETS AND INFO, CLICK HERE!