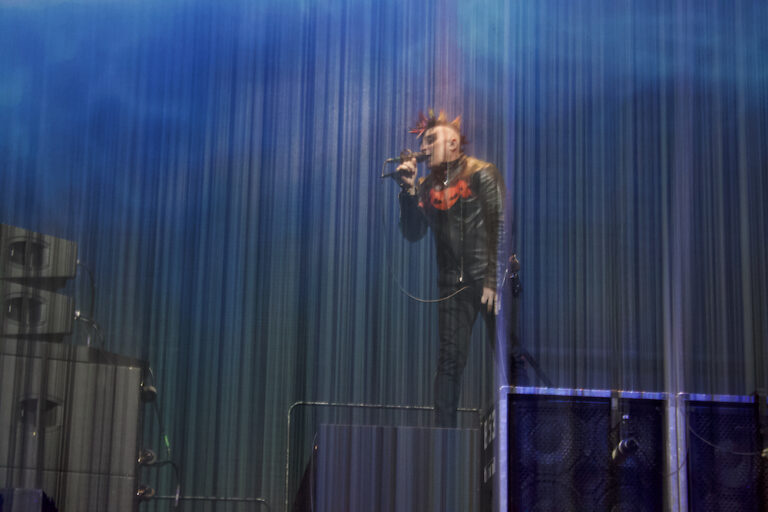 Tool at Prudential Center: Most of the Pieces Fit

I have been a Tool fan since middle school. Although I know that I am not the target age and didn’t grow up with them on MTV, they have a big place in my musical path. From downloading their stuff from Limewire to now owning all of their albums and even going to Alex Grey’s Chapel of Sacred Mirrors, it’s safe to say I like Tool… just a smidge. This was the second time I saw them, this time at the Prudential Center, but much more special because I was able to shoot them from the photo pit.

There were only 10 photographers allowed in the prestigious zone before the stage and only for the first song. I was clearly the rookie with my novice camera setup, but I wasn’t going to let that stop me.

The opening band was a relatively unknown act named The Acid Helps. They hit the stage around 7:30p.m. and although I caught one song from the pit, I liked them. Dual Gibson SG guitars, glowing lava lamps and neon mushrooms on either end of the stage, and a stoner doom sound a lá Kyuss piqued my interest. They currently only have two songs available for streaming, so feel free to do a deep dive.

After being shown to the room where the photogs would wait, it was time for Tool. We were brought back to the photo pit just in time for the “chains” to be brought in. I’m not sure how to classify them – Chains? Strands? These floor to ceiling silver “strings” that form a semicircle around the stage and create a cage effect from a distance. Stevie Wonder’s “Superstition” began playing, then the lights dimmed. First onstage was bassist Justin Chancellor, then guitarist Adam Jones, and lastly drummer/octopus Danny Carey. They struck up “Fear Inoculum” off their 2019 album of the same name. The strands were illuminated with psychedelic visuals that swayed naturally. After a few moments, singer Maynard James Keenan appeared from the shadows to his podiums downstage and sang to us.

After the 10+ minute song finished, photographers were brought back to the waiting room to pack up their stuff. I ran to my car, dropped off my camera, and ran back inside – through security and through the arena, only missing “Opiate,” a deepcut from their first EP. As I found my seat, “The Pot” started, and it’s a fan favorite they don’t often play. Pulsing lights, a shining heptagon overhead, and a wave of bobbing heads were seen as Tool muscled through. Maynard notoriously has a few lengthy screams during this song, and he hit one, and ducked the finale.

Following that, they fluctuated between newer and classic songs: “Pushit,” “Pneuma,” and “The Grudge.” The strands creating the barrier were separated during the finishing movement of “Pushit” with Maynard singing leaps and bounds; symbolizing the chains of your mind have been lifted, or something like that. “Pneuma” was set to purple and white light beams, along with a visual of meiosis on their screens. “The Grudge” saw Justin the most animated probably during the whole show, a visual of a man slicing open his forehead and revealing his third eye, and big screams from Maynard (Yes, that big one.)

It should be noted Maynard caught COVID-19 twice. He’s said in interviews it “kicked his ass.” It is not lost on me how talented he is, but in some key moments where a scream would be, there’s spotty moments where he chooses to put minimal effort. But I won’t hold it against him.

“The Patient,” another deepcut off Lateralus came next and “Descending” followed that. The crowd’s reaction to both songs was humdrum, despite the spectacle onstage with a laser lightshow. However, when Justin started shredding on his bass, playing “Hooker with a Penis,” the crowd woke back up. For this one, Maynard grabbed a voice changer and sang about unapologetic crass commercialism, all while pointing to the mech stand during the lyrics of, “Buy our new record.” Meta? Yes. Greedy? Also yes. Did people flock to the merch table for the 12 minute intermission directly following? Yes.

The intermission finished and Danny Carey stepped to the drumset for “Chocolate Chip Trip,” a lengthy drum solo complete with a gong and windchimes. For the penultimate track, “Culling Voices,” all four members came to the front of the stage – Maynard included – and sat on chairs. Danny played a second Les Paul. Purple lights fell over the arena, and from the ceiling rained shiny confetti, glittering and glinting as it descended. After a minute, I looked at my confetti covered lap and also confetti with Tool’s new logo staring back at me.

“Okay, Jersey,” Maynard said following. “You can pull out your stupid cell phones now for this last song. You’ve been great. We will see you again. Rust never sleeps.” Mixture of applause and boos for that comment. “But I do, and I’m fucking tired.” With that, they began “Invincible,” yet another track from Fear Inoculum.

Now, I know this tour is supporting the new record and the tour is continuing where it left off before COVID interrupted. I also know this may be people experiencing this tour with these songs for the first time. But six of 13 songs being new? Each one being 10+ minutes? Where are fan favorites like “Schism,” “Lateralus,” “Stinkfist,” “Sober,” “Vicarious,” “Ænima?” Not a single song from Undertow played. I’m happy to see they dusted off some popular songs, but perhaps they could have supplemented the usual setlist-standards with these new songs.

Setlist aside, the band is brilliant. You can expect a two-and-a-half hour show with outstanding visuals, wild light displays, and Maynard crouching like a stalking butler.