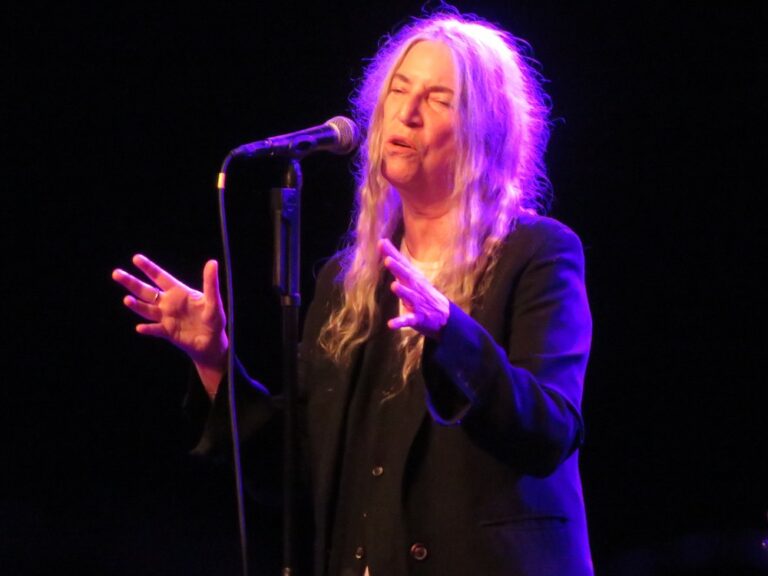 Patti Smith has mellowed her music gradually over the years. For those who have not seen her concert in a few decades, her 21st century performances have had more slow and soft songs than rockers. Characterizations like “the priestess of punk” and “rock goddess,” which she never claimed but were placed upon her by admirers, at this stage may be  irrelevant.

Smith does not record new material often. Her most recent album, Banga, is now 10 years old. Her creative outlet lands in other forms of writing, including memoirs and collections of prose and poetry. Smith frequently performs live with her band (guitarists Lenny Kaye and Jack Petruzzelli, bassist Tony Shanahan, and drummer Jay Dee Daugherty), and instead of introducing new original songs, she updates her repertoire with readings and cover songs. At the Brooklyn Steel show, her covers included songs by Burt Bacharach, Stevie Wonder, U2, the Doors, and Love.

While Smith’s concerts are more comfortably mainstream in this day, the performance at Brooklyn Steel was fresh and ebullient. Smith sang in fine voice, tender, or roaring as the songs dictated. Her stream-of-consciousness talks between songs further engaged the audience. The guitarists fueled the drive by injecting tasteful firepower into the musical arrangements.

Smith’s energetic rock star dynamics on the faster songs had her darting around the stage. As the tempo and volume ramped higher late into the program, she strapped on an electric guitar on one song, mostly playing feedback and distortion, then yanked each of the six strings in order to break them one by one. Smith was both a performer and a performance artist.

Towards the end of the evening, Smith mentioned that although she is 75 years old, she has something that other senior musicians do not have, and that is youth in the audience. Her observation might not be entirely accurate, since the Rolling Stones and the Eagles are among the acts that draw a mixed audience. Truth be told, however, quite a lot of younger fans were in attendance. As for Smith herself, she is remains youthful in spirit.