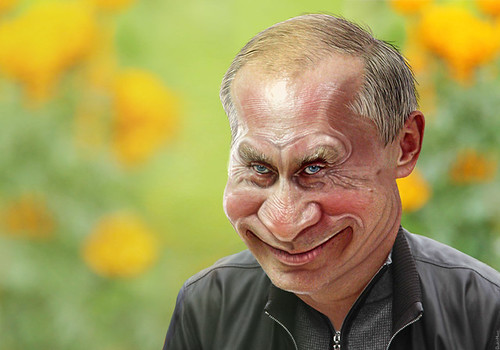 "Vladimir Putin - Caricature" by DonkeyHotey is marked with CC BY 2.0.

Everyone has a plan until they get punched in the mouth.

What the fuck is Vladimir Putin doing?

This is not rhetorical. I have no idea. From all I have read, heard, and/or deciphered from this Russian invasion of Ukraine, no one – and there has been nothing viably coherent from the man himself – has a goddamn clue. We are a couple of weeks into this ill-conceived, terribly executed military mission, and despite becoming an international pariah and sinking his nation’s already anemic economy, this entire mess has done nothing but effectively lift the veil on whatever myth the Russian president has been concocting for decades: He is shrewd global manipulator.

Suddenly, the man looks spectacularly stupid and embarrassingly weak – add in a sprinkle of pettiness, a dab of irrationality, and top it with pure idiocy, too. Certainly, our politicians, including our last president who carried the tyrant’s water bucket for four years and just this week called him “a genius,” figured this guy was shrewd and cunning. Fox News spent the past few weeks ejaculating over his brilliance as a proud world leader with his finger on the international pulse, understanding the brutal nuances of world politick, and acting with swift and measured precision. Wherein our old, clueless president is unmatched. Shit, say what you want about cranky Joe Biden, but he has played this like a champ. So far, he has rallied the world to put the screws to Putin’s hubris move. If anything, it has revived his nearly flat-lined presidency.

It is an understatement to stress that now in the wake of this super-botch, everyone may have miscalculated Putin. That is except Ukraine President Volodymyr Zelensky, whom Putin has turned into a rock star and the world’s superhero – another hidden prize of his grand blunder. Let’s face it, Zelensky’s defiance has turned this into a hack move made by a third-world chump, as if Saddam Hussein had come back as a bald, fat goon, whose only hope for anyone to pay attention to him is to bully the country next door. Putin has created a quagmire of human misery and destruction that has the distinct look of a man trying to open a tuna can with sledgehammer. Four days into this, even Donald Trump was faking love for NATO.

Vladimir Putin was supposed to be our worthy adversary, akin to Rommel vs. Patton instead of Mike Tyson vs. the town drunk. He appears to have no endgame beyond what he, I guess, claimed was defense against NATO’s influence too close to his border, but instead has created the worst possible scenario: An angry and motivated enemy at his border. Dead mothers clutching charred infants have a way of getting the locals riled. He thought no one would have the stomach to oppose him, and before the week was out, everyone did, even China, who acts like an ally but would just as soon move on as a solo act, and Saudi Arabia, who positions itself to absorb Putin’s fleeing oil customers.

Of course, any act of war is going to bring hardship. But most dictators worth a shit would have weighed this against what riches and real estate might be available once the carnage is done.

To wit: One can deduce the actions of Adolf Hitler’s 1939 invasion of Poland in five seconds. It was horrible, immoral, and world-shattering, but it made military, economic, and national defense sense for Germany. What does Russia get out of “owning” Ukraine? A money-pit headache. Moreover, Hitler’s burgeoning economy was built on a war machine that not only revived the nation’s solvency but had already done some nasty shit for months before this. It appears the lapdog generals in charge of this operation did not have what it takes to tell Putin his heretofore latent army sucks ass.

The Hitler comparison makes Putin uncomfortable? Ok, take Napoleon in the opening years of the nineteenth century: the French had been preparing for war for decades and possessed what turned out to be an unstoppable force to expand the parameters of his rule in Europe. Putin’s army has had a hard time even getting a foothold in the country across the fucking street. He could have gotten a Northern California biker gang to pull this off quicker. So, now he has exposed his military as wildly overrated and undermanned, and his generals as stupefied neophytes. If Stalin had this force, the Nazis would have glided into Moscow in 1944, Russian winter and all.

I don’t know who talked up the Russian invading army as potentially impressive, but Jesus Bicycling Christ, this whole thing is a stumble-bum fiasco manned by frightened 19-year-olds with no over-arching plan to refuel vehicles, secure flanks, or deal with street-to-street combat. The first week of the invasion will be studied by war historians as a primer on what not to do – overwhelming the botched United States Iraq invasion in the early aughts. In fact, I would say the confused torpor that was George W.  Bush suddenly looks like a mighty warlord compared to this stooge.

And so, predictably, desperate and exposed as a fraud, Putin “readies his nuclear capabilities”. Yawn. The oldest and laziest Cold War maneuver. This is what you do when you fail to learn your own nation’s military history, which would have clued Putin in that both Napoleon and Hitler were eventually defeated by fucking Russia (mainly because they could not occupy nations that didn’t want to be occupied). Failing that, all he had to do was call up Dick Cheney. The former VP might have told him that the place you are wrecking will not likely be welcoming you as liberators.

But, of course, history is pretty much bloated with tales of once powerful nations taking over other nations who did not like that so much. Soon, there will be, for Russia, the exhausting task of fending off insurgencies and weeding out coups. This is far more difficult than poisoning journalists in London, jailing Pussy Riot, and fucking with other country’s elections. Those things gave him an air of invincibly that this invasion has summarily obliterated.

So far, just moving in has been a humiliating slog against civilians brandishing homemade weapons, further revealing half-assed Russian ground-war capabilities. It has alienated the only economic partners keeping Russia a viable nation, unleashed crippling international sanctions, and ceased a crucial oil pipeline partnership with Germany. Remember, Putin is pulling this horse-turd under the auspices of a global economy that his country relies on desperately. Hitler and Napoleon had no such troubles. They were self-contained nations built for war. No oil money. No Russia.

Invasion is the easy part. Occupation is where things get hairy.

Again, I state, this makes zero sense for Russia, and even less for Putin, who clearly has never given a flying mist-fart about Russia. He has a raging hard-on for the tattered myth of the Soviet Union, conveniently forgetting that what ultimately sunk it was stretching its lust for colonization, which is what also sunk every world power since the dawn of civilization.

Putin has made the ultimate mistake of the grifter, believing his own con.