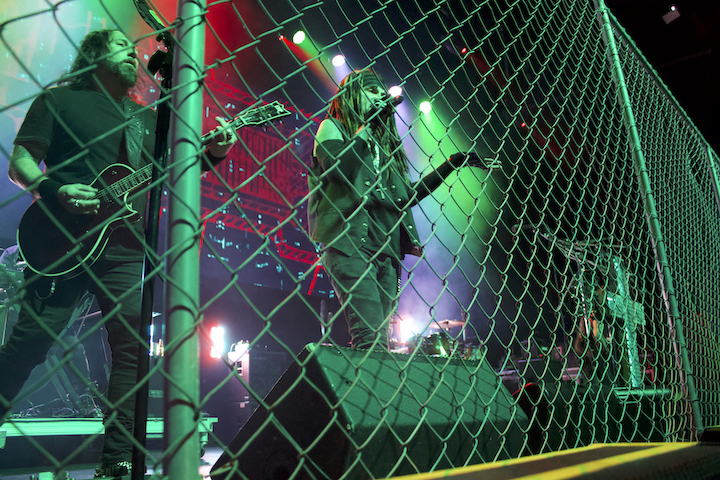 The Industrial Strength Tour stopped by the Wellmont Theater in Montclair this past Saturday night. Industrial pioneers Ministry brought along metal legends Melvins and Corrosion of Conformity for an evening full of headbanging.

This tour was originally scheduled for 2020 with KMFDM and Front Line Assembly but was postponed because… y’know. Then it was rescheduled for spring 2021 – postponed – then fall 2021 with Helmet replacing KMFDM, but that was also postponed. On the fourth attempt, Al Jourgensen and company were able to make it work with a stacked lineup.

Before Corrosion hit the stage, the crowd filled with eager fans while Monster Magnet and Motorhead played before switching to primarily Judas Priest and ZZ Top. Bassist Mike Dean was the first to hit the stage just after 7:00 p.m, who preceded by activating his pedalboard and facing his bass to the amp for a fuzz-filled introduction. The other three members, drummer John Green, lead guitarist Woody Weatherman, and rhythm guitarist and vocalist Pepper Keenan, soon followed. They struck up “Bottom Feeder (El que come abajo),” an instrumental jam from the 1996 album Wiseblood. Then “Paranoid Opioid” and “Shake Like You” came in succession. Their fourth track, “The Door,” saw the crowd largely more animated; headbanging, attempts at moshing, etc.

The last three songs in their set – ”Vote with a Bullet,” “Albatross,” and “Clean My Wounds” – were the band’s crème de la crème. Pepper switched from his red Gibson SG to his very worn, black guitar, unleashing the riffage. “It’s nice to see everyone,” he said before “Albatross.” “It’s been a weird two years, we’re glad to be out of the garage… and glad everyone’s safe.” Corrosion’s most popular song “Clean my Wounds” from 1994’s Deliverance started with a palpable reaction from the crowd, and had an extended bass and guitar jam before the final verse that deconstructed the song, brought it back up, re-deconstructed it, all before recommencing. They played to a full house, and after their set, Pepper met with fans (like myself).

While the stage was being set for the Melvins, obscure Miles Davis deep cuts played over the soundsystem. Ever the abstract, their walkout song was the theme to Sanford and Son and had a projection of Agnes Moorehead for the entirety of their set. Drummer Dale Crover, Redd Kross bassist Steven McDonald, and guitarist/vocalist ‘King’ Buzz Osborne have carved a niche for themselves for straying from normalcy, and it has paid off.

The band had a career-spanning setlist; playing 11 songs from eight albums and included a Redd Kross cover. Seeing Buzz’s mop of silvery white hair and mystic robe have been on my bucket list for several years. If you want to see a band that is laser precise and in sync, look no further. Dale’s drums boom and bellow deeply. When the trio struck up “Hooch,” the fans started moshing, and continued through “Honey Bucket and “The Bit.” Even a man in a neck brace was headbanging along to Buzzo’s note pinching. Their set finished with Dale teasing the finishing drum beats before bowing to an uproar from us Melvinites.

In the changeover for Ministry’s set, roadies brought out lead singer Al Jourgensen’s pulpit; a cross-shaped contraption with lights, screws, music stand, and three microphones. They also brought out fences while the soundtrack of Joy Division and Bauhaus brought the audience back to our gothic roots. Before Ministry took the stage, they projected a message that read, “Ministry stands with Ukraine,” while the Ukrainian National Anthem played; people cheered. Then, the band came to the stage. “We are here to celebrate 30 years of our album The Mind is a Terrible Thing to Taste, so we’re going to start with one from it,” said Al. “This one’s called ‘Breathe.’” The band launched into their anthemic song about global pollution. It’s ironic; Al’s telling us to breathe in a cadence that resembles a yoga video, but, “Breathe, you fucker,” isn’t exactly yoga material.

The sextet then played a marathon of throwbacks – “Burning Inside,” “N.W.O” with all of the world’s flags flashing over the screen, “Just One Fix” – Rammstein owes their entire career to this riff – “Thieves,” and lastly, “So What.” For these songs, I walked around the theater trying to find good vantage points for photos. Al pulled out a Flying V guitar and played the solo for “Just One Fix,” which superseded my expectations. The band thanked us for coming, meanwhile a slideshow on the band through the ages projected on the screen: lineups, clips from music videos and interviews, and album covers.

The largely green-lit stage turned to red, with Al’s green glowing pulpit turning to soft white by incandescent light bulbs. The cages up for the entire show came down. The screen projected an “In Memory” slideshow of past members; Mike Scaccia, Bill Rieflin, William Tucker, Joey Jordison, and more. The band returned to a slightly-thinned crowd. “Thank you for staying with us,” said Al. “Those were songs from our past, but now, let’s look to our future. We’re going to do a few new songs from our latest record Moral Hygiene.” With that, “Alert Level” commenced – another bleak song with an unlikely sing-a-long chorus of “Let’s get ready to die.” The penultimate track of “Good Trouble” has footage of civil unrest, especially pandemic-era. Lastly, the band did one final cover, the Stooges’ “Search and Destroy” complete with saturated footage of nuclear explosions. This cover was slower than the original and Al chose to alter Iggy Pop’s vocals to a more plodding scream.

Ministry and Melvins were two elusive bands on my bucket list. I’ve seen Corrosion of Conformity before, and they consistently rip. Al is certainly a showman; his attire, his stage presence, and Ministry’s profound abilities. Because of this, I will be anticipating seeing Ministry again. This entire concert was one of the loudest in my lifetime… even with earplugs. One last tip: Ministry loves strobe lights, so bring sunglasses for their set, or the Big Flash of the Nuclear A-bomb, whichever comes first.