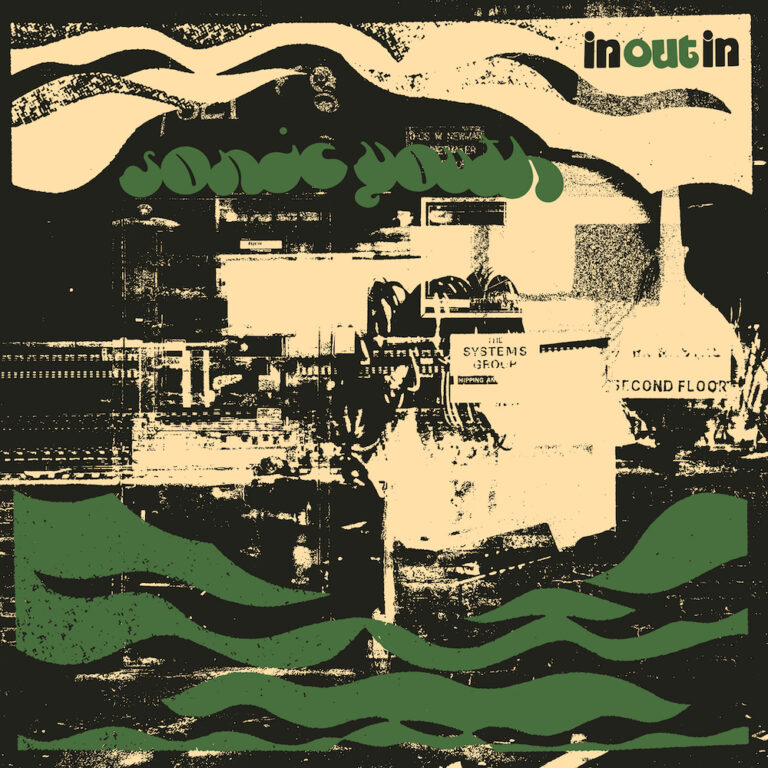 No Wave royalty Sonic Youth have been sorely missed by fans since their heartbreaking disintegration in 2011. While none of the gang has disappeared into some art -or music-less void, nothing feels quite as spectacular as hearing Steve, Kim, Lee, Thurston, (sometimes) Jim, and (sometimes) Mark creating–together.

In/Out/In isn’t a new album from Sonic Youth, per se; it’s a release comprised of rare recordings made between 2000-2010. Almost all the tracks have, at some point, been available on Sonic Youth’s website. “In & Out” and “Out & In” were included in Three Lobed’s 2011 box set called Not the Spaces You Know, But Between Them. Three songs haven’t ever been available on physical media until now. The flawless arrangement of In/Out/In gives the decade of (what could have been) disparate pieces; the discordant cohesion fans crave from the band.

“Basement Contender” kicks it off. This piece was recorded in 2008 when the gang was working on The Eternal in their Northampton practice studio. Pavement’s Mark Ibold played bass, and Kim Gordon strummed her guitar alongside Lee Renaldo and Thurston Moore. The result is a gauzy tapestry of Fender strings woven into ethereal patterns. Shelley’s restrained beats are the essential gravitational force grounding this floaty dreamscape. Unexpected guitar riffs ebb, flow, build, peak, break and fall, giving the song the perfect texture. Feeling a sense of improvisational play without too much boring airiness, “Basement Contender” winds down with some amped-up electricity and hints of distortion.

“In & Out” sounds like an evocation. At the start, a “tsch-tsch-tsch” cymbal and solid kick drum pulse intertwine with reverberating groove of the bass. Kim’s voice is like a hallucinatory siren call over the ocean of sound waves. In Gordon’s memoir Girl in A Band, she explains her desire to find transcendence in her music. This song has that power for me. It starts with such a humble “giddy-up” vibe then builds into string and tapping pulsations. At the same time, discordant feedback pokes through to compliment that throaty vocalizing Gordon lays on–it’s a spiritual seduction of sorts.

“Machine” sounds most like the Sonic Youth of my youth. If you go bananas for dialed-up drums raging hard into a fast-slow-fast formation, then sticks stomping across the kit like they’re in a dance-off against guitar chord changes­ – “Machine” will make your mouth water. The shreddy guitar and signature SY baseline are irresistible until we enter “Sonic Static” in all its dissonant noise glory.

“Sonic Static” has barely a beat in earshot. Instead, a bygone era’s buzzy TV/radio static overlays chirpy electronic effects. If you listen to this song enough, it takes on a nature-ish harmony. Despite the entirely human-made sound plays, whistles, bird calls, and winds through brush come to mind.  Made for their long-time collaborator Chris Habib’s film with artist Spencer Tunick, the ambient music influence of Jim O’Roarke is a highlight of this tune. The film of the same name is easily accessible online and adds more dimension to the already satisfying experience of hearing this orchestra of the unexpected.

Finally, we end on “Out & In” – how satisfying? Over 12 minutes long, the flirtation of percussive effects and tremolo/vibrato string punctuations open into a kind-of drone. But the drone isn’t a monotonous exercise in shoe-gaze introspection, not at all. Instead, it’s an invitation for the whirlwind of strings and their tech effects, amp-induced feedback, upward chord progressions, beat builds, and layers of experimentation. It has the fullness of a Swans performance with less of the band. Totally shamanic and simultaneously fun, “Out & In” is tricky; it builds and builds then drops us into a bit of puddle after we’ve been swept through a sea.

In/Out/In is just the right amount of complexity. It’s a soothing balm where the sting of the group’s separation still smarts. The band’s chemistry feels intimate at times, like gazing at their inner workings. Likely it’s because none of the recordings were done before an audience. While it’s an excellent listen, In/Out/In feels like looking back at a childhood house remodeled by its new owner. It’s known, but with a new context, feels less familiar. Staying with it too long reminds us we can’t access it the same way ever again. Maybe, that’s the gift, it’s fresh to us in a way it couldn’t have ever been before.

IN/OUT/IN, THE “NEW” ALBUM FROM SONIC YOUTH, IS OUT NOW WHEREVER YOU LISTEN TO MUSIC! PURCHASE PHYSICAL COPIES HERE!