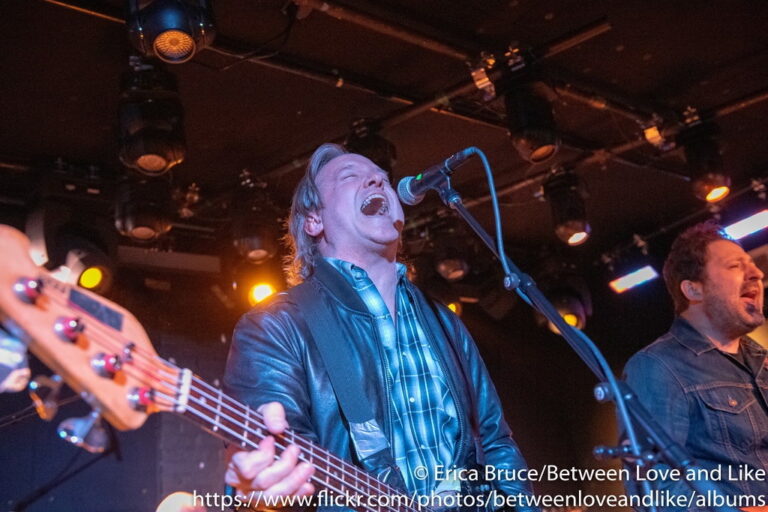 Usually when you attend a concert, there is excitement and joy in the air. After all, it’s the opportunity to experience live music in a shared atmosphere with equally adoring fans. Friday night, March 11, 2022 was different. The second you stepped through the front door of Ridgewood, Queens’ T.V. Eye, the ambience immediately changed. It blanketed you. You felt anticipation; quickly realizing it would be no ordinary night, nor would you be witnessing a typical performance. The feeling was similar to watching the opening moments of a film and realizing you are about to experience something special, more than was promised. It was like a sporting event where deep in your bones you knew your favorite team or athlete was not just going to win, but achieve something extraordinary. This night would be an once-in-a-lifetime event.

Aeon Station, singer-multi instrumentalist Kevin Whelan’s quasi-solo project, was not only making their live debut, but it would mark the first time 3/4 of the long-dormant Wrens would share a stage in nearly 15 years. Would Kevin, brother and guitarist Greg Whelan, as well as drummer Jerry MacDonald be rusty? Or would the show be a return to form? And how would Aeon Station’s Observatory translate live? The disc had been a critical darling and indie hit since its release last December, but how would it stand up when performed by a band that also included the album’s producer Tom Beaujour and keyboardist Lysa Opfer?

Famed Indie singer-songwriter Doug Gillard started off the show with an earnest set of solo acoustic/electric songs from throughout his career. The former Guided By Voices and Nada Surf guitarist thoroughly warmed up the gathering crowd, finishing by calling out Aeon Station guitarist Tom Beaujour to join him on the Guided By Voices classic “I am a Tree.”

As the curtains drew closed – yes, the venue has curtains on its stage – the now at-capacity crowd grew eerily quiet, especially as the rumbling of equipment and instruments grew louder. As they opened there was an audible sigh of relief as the band launched into “Better Love.” There were no stumbles, no miscues, and no sudden stops. The band didn’t just breathe life into Observatory, they elevated each of the album’s songs as Kevin shifted between bass, acoustic guitar, and keyboards. He engaged the crowd throughout, mentioning his more than 14-year absence from the stage and even pointed out his 80-year-old mother in the audience. And yes, there were a trio of carefully selected Wrens songs played: “The House That Guilt Built,” “Happy,” and “Hopeless,” before which Kevin introduced the band. After sharing a humorous story about meeting drummer Jerry and later keyboardist Lysa, he commending the soundman for his awesome job. Credit, however, was due the band who sounded like a well-rehearsed and seasoned touring band and not an act making their stage debut.

After concluding the set with the beautiful “Alpine Drive,” the band left the stage before returning less than a minute later for an obligatory encore. The band finally launched into Observatory’s big hit, “Queens,” to celebrate what had obviously been a successful night.

Of course there were fans hollering for earlier Wrens songs, and you could not blame them, but tonight was about Aeon Station getting prepared for their South by South West showcase happening this week in Austin, Texas. The long-running music festival does not know what they are in for. For now, however, the New York City crowd went away ecstatic, just wanting more. One could only hope that Aeon Station will soon return to the tristate area for more magical performances.