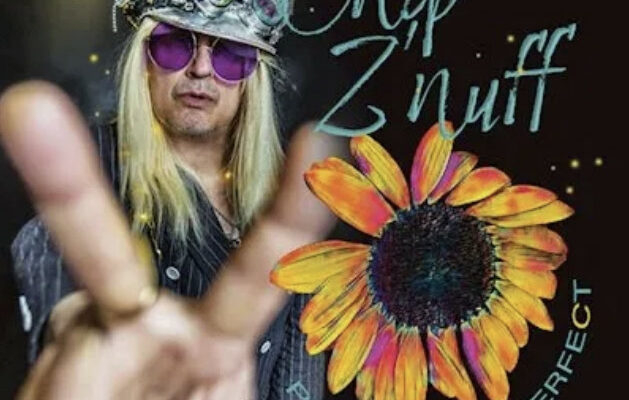 Chip Z’Nuff Delivers A Much Needed Message In A Bottle

Have you ever seen a title for an album and/or song and said, “Eureka! This describes me to a tee!” Maybe you didn’t say it that way, but you get what I’m saying. Perfectly Imperfect, the new solo album from the founder of the Grammy-nominated band Enuff Z’Nuff did that for the writer of this review.

The songs off the new album, Perfectly Imperfect, were all written by Chip Z’Nuff, except for “Heaven In A Bottle” and ”Honaloochie Boogie.” They’re all showstoppers.

“All songs are written as I see the world through my rose-colored glasses. It’s my heroin letter to the new generation,” Chip said in a press release.

The album includes guest appearances from Joel Hoekstra (Whitesnake, Trans-Siberian Orchestra), Steven Adler (Adler’s Appetite, ex-Guns ‘N Roses), Daxx Neilsen (Cheap Trick), and Daniel Hill (Enuff Z’Nuff). Slash and Neal Schon are still on the bucket list for a future Chip Z’Nuff album, so I’m sending it out into the universe for this to materialize.

“Doctor (I’m Going Down Can You Save Me?)” sounds sugary sweet with great guitar work via Hoekstra. However, there’s a deeper underlying message woven in the lyrics. It may or may not hold a different interpretation for those listening, but that’s what makes music so special. “Ordinary Man” seems to be the sequel of its predecessor which brims with hope.

The first single, “Heaven in a Bottle,” is an older gem taken off Chip’s vast songwriting shelf. It was a track written with former Enuff Z’Nuff vocalist Donnie Vie that he dusted off and tweaked a bit. The final result is a fun sing-a-long-in-the-car song. The accompanying video was filmed in the lovely city of Blue Island. It’s light-hearted and a joy to watch. “Roll On” follows with a nod to Cheap Trick and is one of my personal picks.

The next tune “I Still Hail You” conveys the absolute feeling of Perfectly Imperfect in my opinion. “3 Way” is a rollicking romp and “Heroin” is a bluesy stomp. The cover of Mott The Hoople’s classic “Honaloochie Boogie” (Try to say that five times fast!) is a wonderful rendition and a great way to end the album.

Perfectly Imperfect embodies the message of peace and love even in times of uncertainty. Chip Z’Nuff provides just the right antidote for music lovers everywhere.

PERFECTLY IMPERFECT BY CHIP Z’NUFF IS OUT NOW!