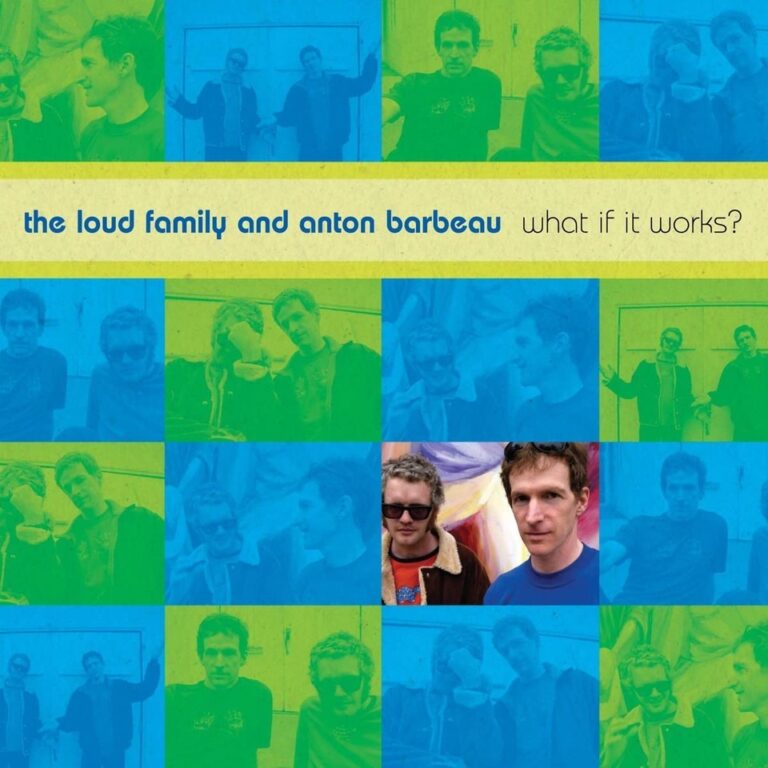 The Loud Family and Anton Barbeau, What If It Works?. In 2001, singer, songwriter, and guitarist Scott Miller was preparing to leave the music world for a job in tech, having spent much of the previous two decades leading two critically acclaimed but commercially not-too-successful power-pop bands: Game Theory (1982–90) and the Loud Family (1991–2001). His time away from rock turned out to be brief, however. Five years later (and seven years before his suicide at age 53), he grabbed an opportunity to team with fellow cult artist Anton Barbeau to record What If It Works?, which features several of Miller’s Loud Family bandmates.

That unjustly overlooked 2006 album – which has now been reissued with bonus tracks – offers four songs by Miller, three by Barbeau, one number that they co-wrote, and covers of the Rolling Stones’ “Rocks Off,” Cat Stevens’s “I Think I See the Light,” and the Zombies’ “Remember You.” The bonus material includes two more band numbers as well as eight demos and home recordings, three from Miller and six from Barbeau. A 16-page booklet features a conversation between Barbeau and Miller’s widow about the making of the original album.

Power pop doesn’t get much more powerful than what you’ll find on this record. Imagine the pop instincts of the Raspberries combined with the musical innovation, quirky lyrics, and vocal harmonies of Big Star. That should give you some sense of what you’ll find on such highlights as “(Kind of) in Love,” the psychedelia-flavored “Flow Thee Water,” and the title cut. Not every track is a knockout but at its best, What If It Works? works beautifully.

Son House, Forever on My Mind. Encouraged by a trio of fans – including Dick Waterman, who became his manager – Eddie “Son” House returned to the stage in 1964 after more than two decades away from the music world. His subsequent performances and albums, along with renewed attention to his early work, helped to cement his reputation as one of the most passionate and influential purveyors of Delta blues.

This album preserves the earliest available recording of a full-length solo concert from the period after House’s rediscovery. Recorded Nov. 21, 1964, at Wabash College, a small men’s school in Indiana, it finds House performing six originals, including some of his best-known numbers: “Louise McGhee,” “Death Letter,” “Preachin’ Blues,” “Levee Camp Moan,” “Empire State Express,” and “Forever on My Mind.” (Of these, that last number is the only composition that he didn’t later offer in a studio version.) Also featured are a cover of Charley Patton’s “Pony Blues” and a reading of the traditional “Motherless Children” (labeled here as “The Way Mother Did”).

House, a former preacher, sounds positively possessed throughout this concert set, as he inventively plays his steel-bodied National resonator guitar and delivers lyrics loaded with potent imagery about pain, evil, and death. After hearing these performances, you may wonder why each song isn’t followed by thunderous applause. The answer: according to Waterman, House’s audience at Wabash College consisted of a “quiet and polite” group of no more than “a few dozen” people. It’s a good bet that if he were still alive today, his shows would attract substantially larger crowds.

Bailey Bigger, Coyote Red. Twenty-three-year-old folk/Americana singer-songwriter Bailey Bigger grew up in a little town outside Memphis, Tennessee, and seems to have absorbed elements of traditional country, bluegrass, and Appalachian music. That’s not primarily what you’ll discover on her first full-length album, however. She cites influences that include Jesse Winchester, Joni Mitchell, John Prine, and John Denver, not to mention the Beatles, Fleetwood Mac, and the Grateful Dead; and she seems reminiscent of Dori Freeman, another up-and-coming singer-songwriter, in her ability to meld traditional elements to contemporary pop and folk.

Bailey leaves no doubt of her star potential on Coyote Red, which finds her backed by a talented group of established Nashville musicians. The CD features eight originals about love and nature, more than a few of which are as well-written as the album’s memorable covers of Jed Zimmerman’s upbeat “Black-Eyed Susan” and Winchester’s classic “Mississippi You’re on My Mind.” High points among the Bigger-penned numbers include the bluesy “The Levee,” where prominent piano complements her distinctive alto; the melancholy “Running from the Water”; and the touching, strings-spiced “Wyly,” which is apparently addressed to the singer’s brother.

Bart Davenport, Episodes. Singer, songwriter, and multi-instrumentalist Bart Davenport recorded the wonderfully anachronistic Episodes in his Los Angeles home studio. The album finds him putting a modern twist on the sort of acoustic folk and psychedelic soft rock you’d associate with the late sixties and early seventies. At times, such as on the gentle “Alice Arrives,” he sounds reminiscent of artists like Donovan and Al Stewart; elsewhere, such as on “Strange Animal,” he delivers more forceful vocals against a backdrop of organ riffs as well as guitar solos that immediately recall the “Eight Miles High”–era Byrds.

Davenport – who has released seven other solo albums over the past two decades and worked before that with bands like Honeycut and the Loved Ones – has been flying under the radar for too long. His silky vocals, well-hooked songs, and ear-candy instrumentation deserve a wider audience. Episodes serves up the proof.