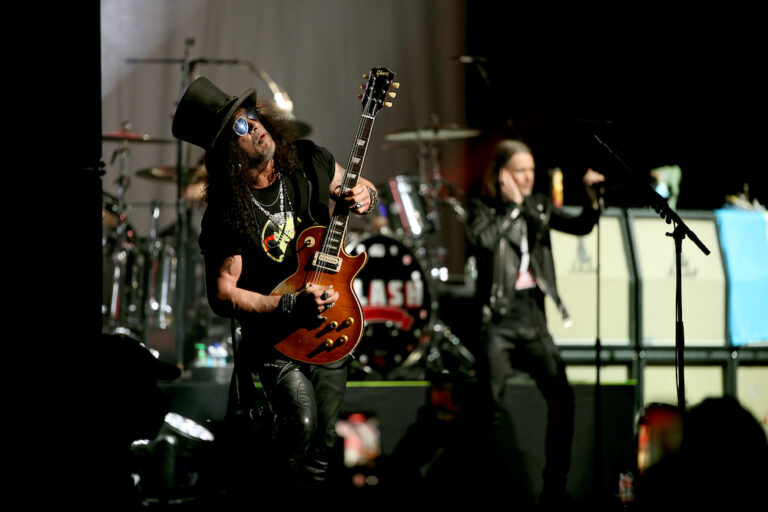 Saul Hudson, better known as Slash, is one of the reasons that Guns N’ Roses will leave one of the biggest footprints in rock history. His dazzling guitar wizardry also raised the caliber of Velvet Revolver in the 2000s. He is doing it again with Myles Kennedy & the Conspirators.

Slash featuring Myles Kennedy & the Conspirators are on a 28-city headlining tour across the United States in support of the collaborative’s most recent studio album, titled 4, released on February 11. The River Is Rising Tour features Slash and vocalist Myles Kennedy of Alter Bridge, along with rhythm guitarist Frank Sidoris, bassist Todd Kerns, and drummer Brent Fitz. The band played a sold-out show at The Beacon Theatre on March 12. A new hard rock band, Plush, opened the show playing a set of original songs from its self-titled 2021 debut album, along with a cover of Heart’s “Barracuda,” where lead vocalist Moriah Formica’s powerful range expertly replicated Heart’s Ann Wilson.

Across two hours, Slash featuring Myles Kennedy & the Conspirators performed songs from the collective’s four albums, including seven songs from the newest album. The repertoire also drew two songs from Slash’s solo albums  and one song, “Speed Parade,” from Slash’s Snakepit. This tour also introduced two curious new entries into the band’s set list. Bassist Todd Kerns sang “Always on the Run,” a song Slash and his former schoolmate Lenny Kravitz wrote together that wound up on a Kravitz album. The second surprise was a cover of Elton John’s “Rocket Man,” which Slash, Kennedy and company contributed to the soundtrack for a documentary, Stunt Man, about Hollywood stuntman Eddie Braun’s daredevil attempt at Evel Knievel’s jump across Idaho’s Snake River Canyon. The set included no Guns N’ Roses or Velvet Revolver songs.

Kennedy proved to be a strong vocalist, giving each song its melody and its commercial appeal. Kerns did well singing the aforementioned “Always on the Run” and also “Doctor Alibi,” a song which the late Lemmy Kilmister of Motörhead sang on Slash’s first solo album. The entire band worked well together. By far, however, the star attraction was the guitarist with the top hat, curly hair, and sunglasses.

From the first note of the first song, “Driving Rain,” Slash’s riffs and leads drove the performance. Myles Kennedy & the Conspirators demonstrated its  ability to perform an above-average rock show. It was a fine rock band playing solid hard rock songs. Simply stated, when Slash’s guitar pyrotechnics entered into the mix, his outstanding guitar work took the songs to the next level. Slash turned every good song into a great song. His hard and heavy crunch defined the skeleton of most songs and he played his speedy and tasty licks with advanced skill, as well as his usual super cool finesse. Rock fans could only marvel with awe. At the Beacon Theatre performance, Slash again justified why his name appears in virtually every list of all-time greatest guitarists.