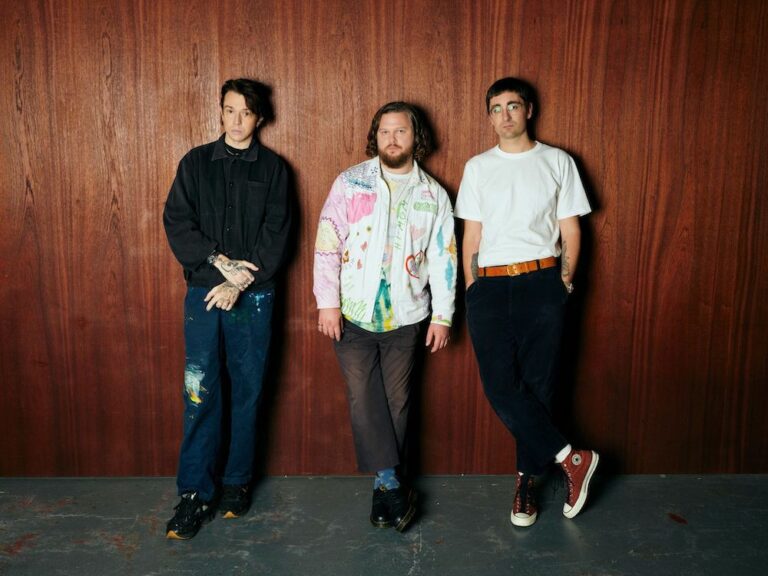 Gus Unger-Hamilton is a third of alt-J, but as we discussed with him, the whole band is loving this headline tour and excited for their forthcoming Madison Square Garden show, where they will be playing all of their story-worthy songs live.

Indie rock/folk act alt-J has become an underground cult sensation finessing their indie roots with mainstream rock. With their hits “Left Hand Free,” “Breezeblocks,” and recently “U&ME,” the UK-based band has made an indelible mark on fans, but also the music industry, thus far.

The band formed in 2007 with guitarist and lead vocalist Joe Newman, drummer Thom Sonny Green, and keyboardist/vocalist Gus Unger-Hamilton in Leeds, England. Although the band was a foursome at first with founding member Gwil Sainsbury, they split ways in 2014. “It was something that happened that thought was never going to happen. It made the three of us reconfirm our commitment to the band by not leaving. It advertently caused us to redouble up to our project,” says Unger-Hamilton.

alt-J’s latest effort, a full-length record, finds themselves in familiar territory without leaving the comfort of what they know. The album opens up with the aforementioned upbeat anthem “U&ME,” but then dives into the seedy consciousness of Hollywood on “The Actor,” and concludes with the teenage romantic dream of “Powders.”

During the pandemic, the band was locked down with no pressures and found themselves delivering one of their best albums to date – The Dream.

“U and Me” finds the album opening up with a positive, upbeat note. Do you agree? What do you want the audience to take away from that song and album The Dream?

I definitely agree with that. It’s a positive song on the album. We enjoyed writing that song and we had written it kind of spontaneously on soundcheck while on tour. After the whole pandemic period, it was a positive song to come back with. It’s a kind of a ‘good times around the corner’ kind of thing.

I think the album has its light points and dark points, as always, really, but it is a healthy blend of the two. We always try to make albums an emotional journey.

Sonically, The Dream, is being praised as alt-J’s best work. Did you feel any pressure in making this album? Were they any different recording techniques on this particular project?

We felt like everything was going well. We didn’t have any problems coming up with ideas for the album. We always worked with the same producer, Charlie Andrew. We wrote and recorded the album all in the same place. We rented a house in London – that made it more lax. It made it more enjoyable to go to work every day. That made a big difference.

The song “The Actor” touches upon the Hollywood scene a bit. Why write about Hollywood?

I suppose growing up in England, we have all grown up in Hollywood’s consciousness. Hollywood is where stories are told but none other than that of celebrity and scandal. Sometimes you come across a true story that you think is worthy of a song, stranger than fiction almost. We took this story and turned it into the idea of a struggling actor who moves to LA and ends up dealing drugs.

You said something in a previous interview about how ‘it wasn’t the pandemic that influenced the album, the conditions that it created did.’ Can you talk more about this?

Sure. This was the longest we ever spent in the studio and we never felt rushed, which was really refreshing for us. I think the album came out better in result. We didn’t feel stir crazy being trapped in this kind of submarine environment for months on end.

How does this tour compare to others?

It’s like a current headline tour. We have bands that we have on our bill that are fun and the audience knows most of the songs. I have my wife and my son here, so that’s a big difference. Early mornings and early nights versus late mornings and late nights, so I’m enjoying it.

How has expanding your families changed the alt-J experience or dynamic at all?

I think it’s good. Before we had children, we were the most important people in each other’s lives. We would take things too seriously and get stressed out in the studio. It was considered a three-way marriage at times. We can switch off from band politics and go home in the evening and remember what is really important, which is our families and our children. It seems to get make us get along better now that we know we aren’t the most important thing in our lives.

ALT-J TAKES THE STAGE IN NYC ON APRIL 11! FOR TICKETS AND INFO, CLICK HERE!‘