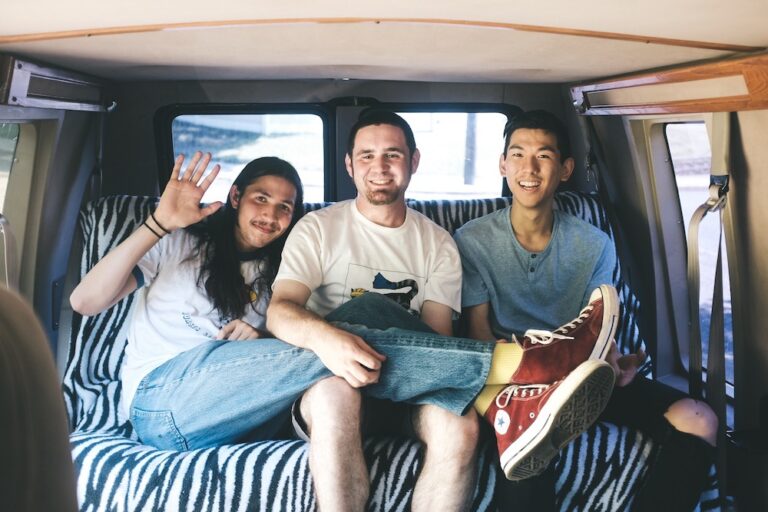 Makin Waves with Have a Good Season: “Kept the Spark Alive”

The childhood friendships at the foundation of the fun, infectious, edgy, adventurous Eatontown-based trio Have a Good Season has helped vocalist-guitarist Nic Palermo, drummer Dan Sakumoto, and bassist Dan Stattner survive and flourish with their music and stage show in the face of pandemic that crippled most bands.

You’ll see what I mean throughout this chat with Nic and Sakumoto, as well as a tour kickoff April 9 at Asbury Lanes, their first time there since the venue’s renovation. Pals in the Asbury trio latewaves, NYC loser rockers Only Sibling, and brand-new Jersey act Starcleaner Reunion will share the bill, while most of the tour throughout the South and Midwest will feature Philly’s Nonfiction.

Most bands based as near Asbury Park as Eatontown say they’re from Asbury, but Have a Good Season makes a point to say you’re from Eatontown. Why, what is the band’s history with the town, and what impact and influence has that had on the band?

Nic: We’ve all been in Eatontown our entire lives. There’s no music scene here whatsoever. For real, there isn’t a single bar or house venue around. There’s something kind of pure and humbling about that to me. We’re just a 15-minute drive from Asbury, and we have nothing but love for Asbury, but this tiny-boring-quiet town is where our journey as a band started. We can’t forget that.

How did the three of you band together as friends and as a band?

Nic: We’ve known each other for ages – practically brothers at this point.

What is the greatest common ground among your musical influences, how and why?

Nic: Our tastes have changed and expanded over the years, but if I had to pick one band that has been a major songwriting inspiration for us over the last five years or so, I’d say Oasis. Mad for it.

You’ll kick off a tour on April 9 at Asbury Lanes. What are you looking forward to most about that show?

Sakumoto: We haven’t played Asbury Lanes in what feels like forever, but we haven’t actually played there since its renovations. We have played quite a handful of some of our favorite shows there so to come back to a beloved venue of ours will make for a special night. Also, the lineup is sick!

Who is sharing the bill at the Lanes, did you pick these bands to play? Where are they based?

Nic: We picked these bands ourselves! Latewaves out of Asbury Park have been our friends for ages now and they always bring the best energy. Only Sibling are a bunch of loser-rockers from NYC and we love their music. It’s our first time playing with Starcleaner Reunion, and we’re ready for them to take us to space.

Of the places the tour will take you that you’ve never been before, which are you looking forward to most and why?

Sakumoto: I think HAGS has rolled through in or nearby all the spots on this upcoming spring tour before except for Salem, VA, and Huntington, WV. Definitely looking forward to exploring new areas and playing to new crowds for us.

Is there a place on this tour that you aren’t getting to and haven’t been yet that you eventually would like to and why?

Sakumoto: It would be awesome to go a bit further down south and play cities in Texas and Florida. We love that warmer weather!

What is the tour schedule?

Will you be touring with any other bands, and if not, are you friends with any of the bands with whom you’ll be sharing bills?

Nic: We’ll be on the road with our friends from Philly called Nonfiction. They just put out a new album called I Painted This One Blue. I advise everyone to give it a deep listen. It’s inspiring stuff.

How does the grind of booking a tour and traveling from venue to venue compare to actually performing and partying while on tour?

Sakumoto: We always like to have a good healthy balance between work and play while touring. It’s important to take care of the business necessary in order to ensure the tour runs smoothly and safely. At the same time, we do as much of this beforehand and in preparation so that we are all in good spirits and having a good time performing for our fans while on the road.

Since 2014, you’ve released an LP, two EPs, and several singles and videos. Your full-length debut album, Shapes I’ve Never Seen, dropped in May 2020. What’s cooking now in the studio, when do you plan to release new material?

Sakumoto: We’re slowly, but surely writing and collecting an album’s worth of material. However, we’ll be in the studio very soon to record a special single we hope to put out sometime later this year!

You released Shapes I’ve Never Seen at the height of the pandemic and had to cancel tour dates. Yet, you’ve grown your following to more than 7,000 monthly Spotify listeners. How and why did Have a Good Season have a good season despite the pandemic?

Nic: Like everyone else, we had to improvise and persevere. Finding new ways to stay inspired really helped. Being more open with each other about the band and our personal lives kept the spark alive. Ultimately, we couldn’t have done any of it without the support of our listeners, families and friends. So much love for everyone who’s on this journey with us!

Are any new songs inspired by the pandemic? If so, how and why?

Sakumoto: I don’t think any new material we have right now was directly inspired by the pandemic, but certainly indirectly by what we all had to face personally during our time of quarantine. I think I can speak for all of us in that the pandemic may have challenged our creativity by pushing and encouraging us to explore some new sound territories and try new things we’ve never tried as a band.

Are there any new songs you’ll be playing at the Lanes and on tour that you can share a bit about as far as inspiration and creative process?

Sakumoto: We plan on playing a couple of new songs live during this spring tour. We feel as though these newer songs act as a kind of extension of what we explored creatively for our debut LP, Shapes I’ve Never Seen, but with the goal to dive even deeper into uncharted musical elements and aesthetic themes we haven’t tried before.

Are you familiar with The Happy Fits and have you ever played with them?

Sakumoto: We’ve never played with them before, but we’re all familiar and would be more than happy to share the stage with those rock stars!

The Happy Fits, too, are a fun, catchy trio with Asian-American heritage. If I was a talent booker, I would put the two of you together because I think your fans would enjoy great cross appeal. That said, what other Jersey acts are your favorite to share the stage with and why?

Nic: Right on! We’ll have to reach out to the Happy Fits. Shout out to them. I’ll take this moment to shout out my other band, Beauty. Deaglan and Owen are ridiculous musicians who play with so much personality and style. They’re in the bands The Vansaders and Little Hag, respectively. Definitely two of our local favorites to play with!

TO KEEP UP ON ALL HAVE A GOOD SEASON HAVE GOING ON, CLICK HERE!