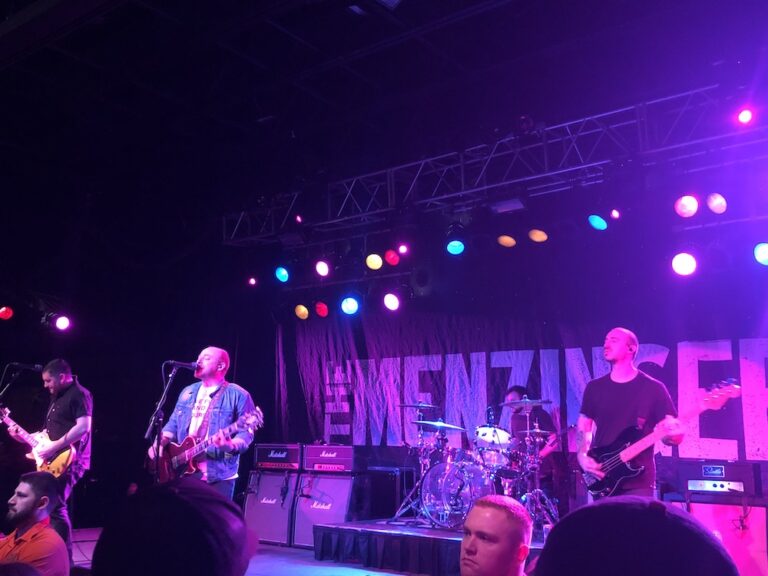 Philly pop punk heroes the Menzingers returned to Starland Ballroom for a nearly sold-out show on April 2. Although they have performed here before and have even been in attendance at shows, this was their debut headlining the iconic Jersey venue. With them, Sincere Engineer and Oso Oso for an emotive evening surely to make Starland history.

Sincere Engineer opened the show, hitting the stage at 8:00 p.m. Their frontwoman, Deanna Belos, started the show with a casual, “Sup,” before launching into “Tourniquet” off their 2021 album Bless my Psyche. Playing a Telecaster and paired with guitarist Kyle Geib’s jazzmaster and bassist Nick Arvanitis’ Strat bass, the quartet played a steady half hour set of honest pop punk, including nine songs. In between songs, Belos tuned her guitar and stammered through her nerves, jokingly saying, “Can you tell I’m nervous?” Despite her nerves, she was able to perform past them and led the band into a respectable half hour. I enjoyed them and will be supporting them from here on out.

Coming in hot off their surprise-dropped fourth album, Sore Thumb, Oso Oso took to the stage at 8:45, walking out to the Seinfeld theme. Lead singer Jade Lilitri sported a beanie over his blonde hair and played a fascinating black and white guitar [A/N: unsure of model] with bandmates playing a blend of mature alternative and cognizant punk. Standouts from their setlist included “Basking in the Glow,” “father tracy,” and “Reindeer Games.” For one song, their drummer hit a cymbal with his red tambourine. Jade swapped out his Yin-Yang guitar for a cowbell for a song and did play an impressive rhythm with the drummer in unison. It was apparent they were having fun; the final track of “gb/ol h/nf” saw the band smiling at each other, their bassist leaping into the sky, and the five of them locked in an unspoken fellowship. A very humble band, happy to be performing for us.

In the interim before the Menzingers came out, the soundsystem played a mix of punk staples – Bouncing Souls, The Clash – and singer-songwriters like Tom Petty. The house was filled when the lights dimmed at 9:45 p.m. and a Ramones song played. The four of them – drummer Joe Godino, bassist Eric Keen, and the vocal/guitarist duo of Tom May and Greg Barnett – appeared, all smiles. They launched into “Strangers Forever” from 2019’s Hello Exile and there was an instant pit. Without a second’s notice in between songs, they struck up “Tellin’ Lies,” an anthem about comparing your late 20s to the success of others. “The Obituaries” followed that, and I was so dang excited, I ran into the pit and told my partner to hold my stuff. “I will fuck this up, I fucking know it,” sang Greg with everyone singing along. “Thick as Thieves” followed that, and then the band took a moment to revel in the applause.

“We have played this special place plenty of times, but this is our first time headlining Starland, so this is really special,” said Barnett with a smile to abundant cheer. He then told the story of the four of them (plus a friend or two) cramming into a car from Philly to see Against Me! perform on this stage years ago – and Bruce Springsteen was sitting at the bar! From there, it was hit after hit- “Good Things,” “Burn After Writing,” “Rodent,’ and more.

My favorite moment from this show was when the band began “Gates.” They played the first verse, but for the second, Greg stepped away from the microphone; the audience sang every word acappella with deafening sincerity. Tom looked like he was on the brink of happy tears, while Greg and Eric smirked, awash with content.

“This is only the second date of a very long tour, and this has been a long time coming,” said May in between songs while Greg and him switched to acoustic guitars. “We’ve been down in Philly, working on a new album!” After a round of cheers, they struck up “Black Mass;” a song I used to consider to be a filler, but the chorus of, “Do you really want to throw it away?,” has recently taken a new, relevant meaning in my personal life.

The Menzingers are a consistently great live band, but their earnestness is one of their biggest draws. Throughout the set, they thanked the crowd, and then thanked some more’ just so many to say “thank you” to and “thank you” for. They have always been a workingman’s punk band, with class intact.

They concluded with setlist staples of “I Don’t Wanna Be an Asshole Anymore” and “After the Party” with a surprising “Strawberry Mansion” sandwiched in between. The quartet stepped offstage and left the stage in the dark but returned after a moment for an encore. Greg started strumming the intro chords to “Lookers” as the crowd sang along before “Ava House” and “In Remission” closed out the show.

It was my third time seeing the Menzingers, second-and-a-half time seeing Oso Oso, and first time seeing Sincere Engineer. I would not mind if this lineup followed these three bands for the rest of their careers. All three complement each other- with their literary zeal, catchy hooks, and similar vibes. I wish I could bottle this night; all the emotion of the crowd, the moments between my partner and myself, and drink from it.