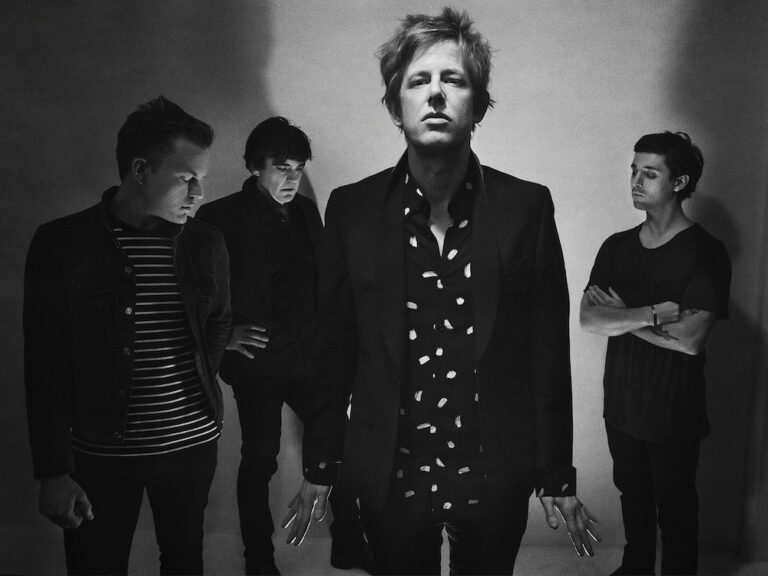 Ten albums is no small feat, but for Spoon, it was all about creating something that would result in a while lot of touring, them being proud of their own art, and making it through a time with little connection – personal, professional, or otherwise.

Since it came out on February 11 via Matador Records, Spoon’s Lucifer On The Sofa has become one of the top indie rock records of 2022’s first half. It’s a return of form for a band that started out with a rock and roll sound anchored by guitars, progressively added pop and new wave elements, and has come full circle with a fresh spin on the approach that became their foundation. It’s a safe bet to say that by the time the ball drops, this stellar album will be on a lot of best of lists. As part of their tour in support of the release, Spoon will be taking the stage at The Fillmore in Philadelphia on May 4 followed by a stop at Hammerstein Ballroom in New York City on May 6. (Singer-songwriter Margaret Glaspy will be opening up both shows.)

The Aquarian had an effortless conversation with lead singer and guitarist Britt Daniel about creating the band’s truest rock and roll record, how COVID-19 affected the creation process, moving back to Austin from Los Angeles, and focusing on (doing a lot of) touring.

Lucifer On The Sofa seems to embrace the rawness of Spoon’s earlier material while shedding the pop sensibilities of your past few albums. Did you have that vision going into the studio for this record or did it materialize on its own as ideas were fleshed out?

We kind of set out to make a record that sounds like a band – a band that’s playing together, playing in a room, and playing rock and roll. I guess that’s a bit in contrast to the last couple records as those records were made a little bit more pieced together. We weren’t really focusing on the live aspect as much. Maybe that’s what you’re hearing now.

The past couple records you’ve done have more of an electronic vibe with a lot of synth being present while the new record has more guitars in the fold. That’s what I’ve noticed from listening to it.

Yeah, especially the last one. Hot Thoughts had a lot of synths, and, yeah, I think you’re paying attention.

I’m trying my best. What was it like navigating the making of this album over a two year period with COVID-19 obstructing the recording and creation process? How much adjusting did it take when March of 2020 came roaring and changed everything?

It stopped the production in its tracks. We thought we were a few months away from being done with the album, pretty close to done. Then suddenly we couldn’t see each other and we couldn’t get together to do any sort of recording so I had a lot of time alone. What made me feel the most normal during the lockdown was writing; if I could get lost in working on a song then that was a good day. It made me feel a little more normal, so then I ended up writing all these songs. I said, “These songs have to go on the album,” so we [ended up] not quite as close to done as we thought we were.

We still couldn’t get together so it just got delayed and delayed. Eventually, in October of 2020, we did meet back up in Austin and we started putting the record back together but it sure did take a long time.

Two years can be a long time to make a record and COVID-19 getting in the way of it just makes it longer. You just said that you were writing while in quarantine, so were you adding songs to the record that previously weren’t there before the pandemic?

Yeah, so like “Wild” I didn’t have before COVID-19. The title track is definitely a song that couldn’t have been written during any other time than April of 2020. “The Devil and Mister Jones” came after the pandemic along with some of the B-sides – some other songs that we finished but we haven’t put out yet.

Before the making of Lucifer On The Sofa, you returned to Austin after living in Los Angeles for a few years. How would you compare both cities? How has it been being back where you cut your teeth as a musician?

There’s a lot of differences between those cities, and even though Austin has grown exponentially over the last 20 years – especially the last 10 years – it still manages to feel a bit more compact than Los Angeles. I actually run into people in Austin and I didn’t really run into people in L.A. very often. The music scene is a bit more of a way of life in Austin and I really like that about it, there’s people who live to go to shows every night or do shows every night. They’re just working musicians and that’s how they do it. There’s such a high volume of shows going on every night in Austin and it’s a big part of what drew me back.

They don’t call Austin the “Live Music Capital of the World” for nothing. There’s always something going on in that city.

That’s for real. They’ve been saying it for a long time and when I first moved to Austin I wasn’t sure that I got it, but now I totally get it.

I can definitely understand that. With Lucifer On The Sofa being Spoon’s 10th album, which is a landmark number for any band, what mark does it make in your opinion when it comes to the band’s evolution up to this point?

Ten is a big number, it’s an even number, and it’s a monumental number. I never really thought too much about that number as we were making the record – it felt like making any other record we’ve made, but it does seem to get talked about a lot. I guess it’s cool, most of my favorite bands have made 10 albums so it’s rarified air. I don’t know how it fits in with the rest of the discography… I think if anything the way I feel about it is that it’s at least one of our best records and I don’t know that a lot of bands can say it’s still happening so I’m proud of it in that way.

Yeah, you should be and I couldn’t agree more. As a fan, I think it’s one of your best records, too.

No problem. I know Spoon is going to be doing a bunch of touring this year in support of the new album, but do you have any other projects in the works with other musicians? I know you’ve done numerous collaborations like Divine Fits and others.

I have friends in Austin that I talk about doing something or other with; maybe starting another band. I don’t have anything concrete right now in the way of extracurricular music because we have so much touring coming up. We got all of April and May so I’m just planning on touring for right now and we’ll see. I’m not sure what happens next. I don’t know if next is another band, if it’s a solo record, opening a liquor store, another Spoon record, or whatever else. I’ll be feeling my way through it over the next couple of months.

FOR TICKETS AND INFORMATION ON HOW TO CATCH SPOON IN PHILADELPHIA AND NEW YORK (THEIR RESCHEDULED DATES), CLICK HERE!