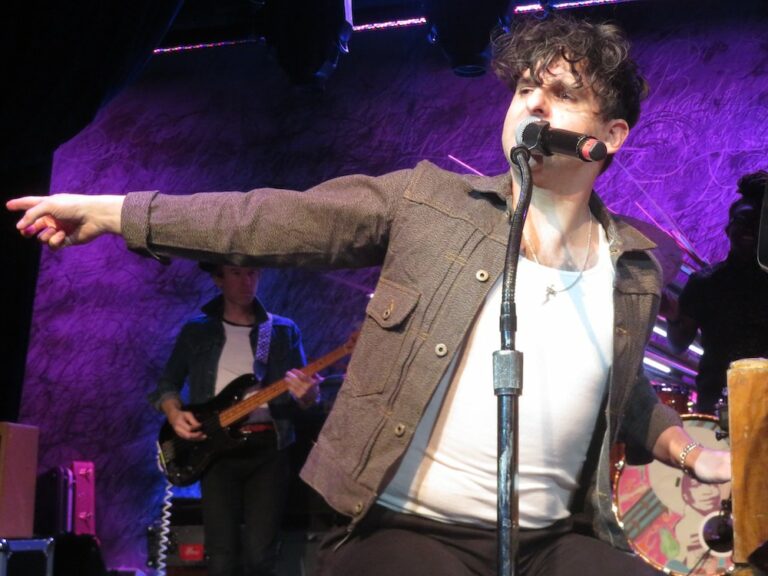 When Elton John played his final show in Philadelphia in September 2018 on his Farewell Yellow Brick Road tour, he spoke the praises of Low Cut Connie. Sir Elton urged his audience to buy the band’s records and dedicated his song “Don’t Let the Sun Go Down on Me” to the band. John also interviewed Low Cut Connie on his podcast.

One might think that blatant endorsements by an American president and a British knight would make Low Cut Connie an international household name. Since 2011, Low Cut Connie has released seven albums of delicious pop songs and has not yet broken into the mainstream. What do John and Obama know that the music world has overlooked?

Sir Elton’s affinity for Low Cut Connie could have been predicted. Like John, Low Cut Connie plays piano-driven rock and roll. Weiner, Low Cut Connie’s sole consistent member, is a fine singer and a flashy pianist. The South Jersey native started his career playing in gay bars, karaoke bars, restaurants, and ballet classes in New York City, often under the name Ladyfingers. Weiner started Low Cut Connie in 2010 as an impromptu recording session, formed the band as a vehicle for his songwriting, and essentially turned Low Cut Connie into the alter ego for his performing persona.

Early this year, Weiner reassembled Low Cut Connie, presently consisting of Weiner on vocals and piano, Will Donnelly on guitar, Linwood Kirk on bass, Jarae Lewis on percussion, Abigail Dempsey on backing vocals and guitar, Amanda “Rocky” Bullwinkel on backing vocals, and Attis Clopton on drums. Low Cut Connie toured the United States promoting 2020 Private Lives album. After a brief breather, Weiner brought the band back to New York City for three shows this week at Sony Hall and the Blue Note. The purpose of these shows was to film them for a documentary, in which the band would perform all the songs from a forthcoming album along with older fan favorites. Will the film be the ticket which will push Low Cut Connie into the mainstream?

At Sony Hall, perhaps as many as half of the songs performed were never before heard by Low Cut Connie’s core following – not on record, not in concert, not even on the live streams. That was a tough sell for an audience where many were eager to sing along to their favorite songs. As it turns out, the songs were true to Low Cut Connie standards. They were lively, they were sentimental, and they were colorful in their presentation. The show included older songs as well, allowing the fans to sing along to “Beverly” and other favorites.

Throughout the evening, Weiner took seriously his role as entertainer. He often reached out and touched the hands of the hardiest fans at the edge of the stage, stood at the piano bench while playing the keys, laid on top of Nellie (the name he has given his piano), tore his undershirt almost down to his navel, and strolled through the audience while singing. There was never a dull moment.

Like many of the influences Weiner shares with Elton John, including Little Richard and Jerry Lee Lewis, Low Cut Connie’s performance was more than musicians playing songs. It was a small-scale spectacle. Teaming solid rock and roll music with a mini-production on stage was fun for both the performers and the audience.