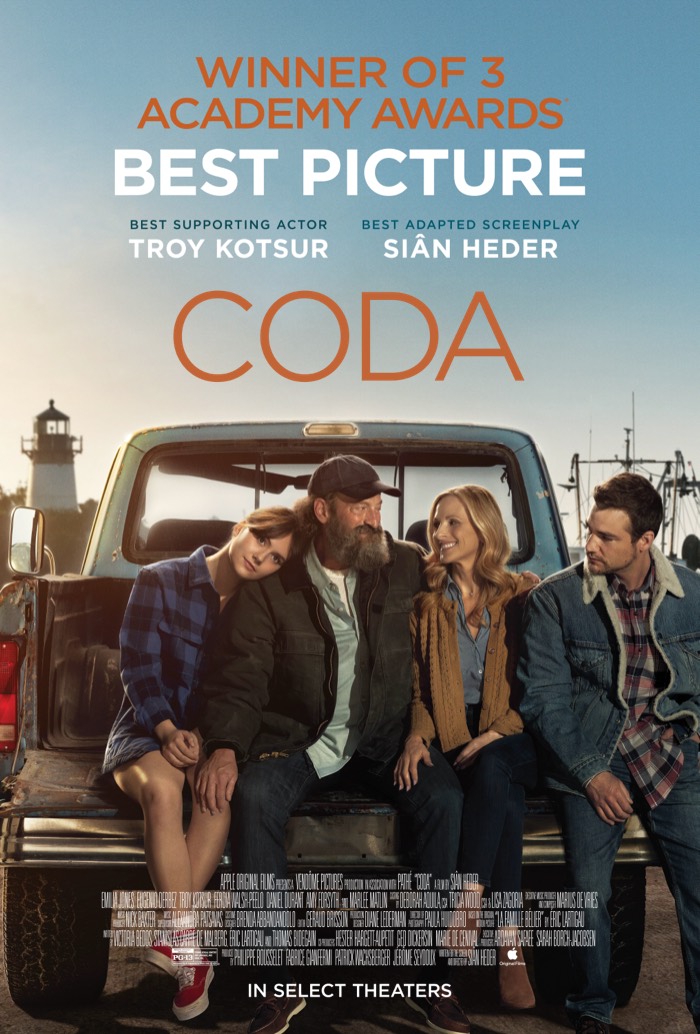 Reality Check: “PLENTY OF PRETTY VOICES WITH NOTHING TO SAY”

In praise of Coda.

Coda – The concluding passage of a piece or movement

One of the tragedies of the Will Smith/Chris Rock slapping fiasco was that it happened as Rock was about to announce the Oscar winner for Best Documentary, which deservedly went to Ahmir “Questlove” Thompson’s Summer of Soul. I wrote extensively about that film last year, and it is still kicking my ass. Later that evening, also lost in all the “post-slap” hubbub was Coda winning Best Picture. I had not seen Coda yet. It was on my list, and although I saw nearly every film nominated, it slipped our schedule. I finally got to it last weekend, and as it unfolded, I began to realize that in many ways it stands beside Summer of Soul as a celebration of the spiritual power of music and its impact on us personally, generationally, and permanently.

Written and directed by Sian Heder, Coda is an otherwise quaint “coming of age” story we have seen hundreds of times, but in a rarity to Hollywood these days, Heder’s story is original and steeped in symbolism presented in a less opaque style prized by outside-the-mainstream films that openly trade in that artistic currency. While there is zero pandering in Coda, there is the expected emotional manipulation we all recognize having grown up at the movies. I applaud this craft in Coda but was ultimately endeared to it because it is a living, breathing hymn to something I figured out some time ago – and it has proved me correct time and time again – music is an essential ingredient to living. To some, it is air to be breathed and the terra firma beneath our feet. Some make music, others, like me, can do it occasionally these days, but writing about it serves its mastery to the gods of bliss.

This is what Coda is for me.

I am going to tread a fine line here in trying to not spoil this for someone who has not seen the film. For starters, I went in cold and without subtitles. This was an important element to understanding its characters better as someone who does not communicate with the hearing impaired on a regular basis. Unless you know sign language, you don’t know what the deaf actors are communicating specifically, but you get it. Just like music – there is an emotional, not literal, translation. It is a whole new way of “watching” conversations and not focusing on words, but actions and emotions. A piece of music, a simple song, like the interaction of the family in Coda, should move you, speak to you, without lyrics. The music will tell you. Here, the signs, the facial expressions, the raw human emotion conveys what you are missing in pure translation.

The plot revolves around a young teenage girl, Ruby, in the final months of her senior year of high school working on a boat alongside her brother for her fisherman father. Her mom appears to be a loving, pragmatic homemaker and business mind of the operation. The family, except for Ruby, are deaf. The father, Frank Rossi, is played with broad intensity by Best Actor winner, Troy Kotsur. He is animated, lovable, playfully determined, and childlike. His wife, Jackie (famed deaf actress, Marlee Matlin), plays off him brilliantly, as does Leo, Ruby’s older brother (Daniel Durant), who could have been merely the “older sibling that doesn’t understand what the more determined younger one needs to find her path,” but instead becomes a crucial pillar to what it is like to grow up in silence along with parents who live in the same silence.

Filled with music, the soundtrack of life, Ruby has one foot in this silence and one far beyond those of us able to hear.

Emilia Jones, as Ruby, is a talented 20-year-old who absolutely nails the frustrations, insecurities, and general freakiness of merely being a teenager, coupled with her crushing responsibility to be the social thread to society for her family. There is never a moment in this story where Emilia doesn’t convince me of her travails. She does not represent every teenaged girl I have ever seen in rote “personal discovery” movies – firstly because she is a fantastic actor, but with the added powers given to her in the script, the story comes alive. Ruby knows she is special talent from the opening scene on a boat with her brother and dad, as she sings along with “Something’s Got a Hold on Me,” a six-decade old soul song sung by the inimitable Etta James. And that something for Ruby is music. You can see in her face; she is filled with such joy. She already adores singing the way one must adore the music to be sung, as it is to live in its disciplines and ecstasies and struggles.

It is something, sadly, she cannot share with her family This is where Heder’s tale hits the hardest, going beyond symbolism into the social construct of everyday life, how it obliterates the over-used fictional archetypes; the parents who do not understand what their child is about because she does not fit neatly into their familial framework or how they envision her life to be. That has been done to death. But what choice does Ruby have with hearing-impaired parents who cannot fathom her one, true passion? Although Heder hints that this may one day be the case, as Frank cranks up Etta on the boat to better feel the bass and the groove – later, we learn he loves to blast Gangsta Rap for its pounding, repetitive rhythms. We feel for the parents. They are beyond one-dimensional caricatures in their inability to hear, both literally and philosophically. They live proudly, and unerringly, with their “impairment.” It is their special language and connection to each other.

But I found myself rooting hardest for Ruby, because I see her as not merely discovering her talents, she needs for everyone else to discover what she is, to show her little New England fishing village what she truly can and will be. This is realized through her connection with choral teacher, Bernardo Villalobos, who, in symbolic terms again, if I may, becomes the human equivalent of Ruby’s passion for music. Bernardo is music. He insists from the first to “roll the r’s” of his name, the music of his Latin ancestry. He is a Berklee School of Music graduate, a man who has given into the call for the struggle and the joys of being music. Someone finally sees this in Ruby. She knows this. Bernardo and Ruby are the platonic love story here, even though there is an obligatory teenaged one.

Again, I am trying extremely hard not to spoil anything here, but if there is such a thing as love in this world it is seeing that something special that makes a person who they are and having the guts to make sure they do not waste it.

Vitally, Heder’s choices of songs are on the money. There is not a wasted metaphor for the scene you are watching (listening to), and the music, like the sign language – the unspoken secret language of its melodies and rhythms – is telling a second story: If you open your ears, and you can let that in, then you can better relate to the Rossi’s world of silence and Ruby’s journey to self-discovery.

There are two gorgeous scenes in the movie that depict this – one that brought me to tears, being the dad of a teenage girl now, and another that helps you to empathize with those who cannot hear the music, that do not know about all the air and the terra firma. And let’s face it, if they are going to put Joni Mitchell’s “Both Sides Now” in a movie, I am all in. And man, does Heder put this in the right spot to get the most from its eternal message of seeing the tragic beauty of existence.

Joni. What more needs to be said there.

In the end, Coda is about family. It’s about being who you are. It’s about how those things can be difficult to balance. It is told through the method of barriers – most pointedly deafness and giving oneself completely to the secret language of music – but, really, it is a generational tale of creativity and discovery. It is a beautiful film.