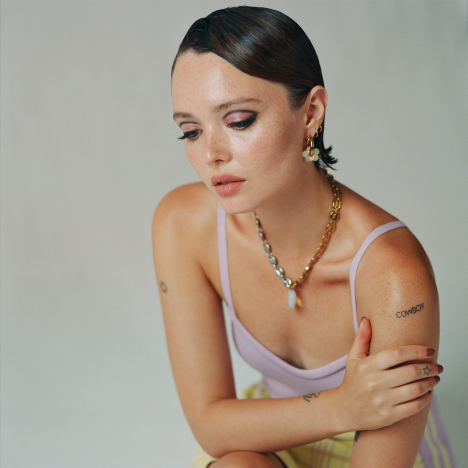 It’s 4/20, which means supporting those who help maintain the creative ebbs and flows of life: indie artists. (Independent businesses of all kind need your attention, too, don’t get us wrong, but the future of the artistic world is in the hands of those underground, up-and-coming, and truly DIY acts who are cutting their teeth in venues big and small, online and on stage, day in and day out. That is Miss Benjamin here.)

Charlotte Rose Benjamin is one of those oh-so-charming indie darlings that we are loving now more than ever. She also just so happens to be a NYC starlet, a city girl evolved from the year-long-native of Martha’s Vineyard. CRB is a gorgeous composer of sights and sounds, and a twinkling, blatantly honest lyricist. Today we have the privilege of premiering her latest track’s visual component, the heavenly homage to the Big Apple and lustrous look at independence in “Louis,” which comes right at the end of her album promo cycle and right before her gig at Baby’s All Right on April 24. (Dreamtina, her debut, drops just two days prior – this Friday, April 22.)

Is the music video for “Louis” a compact, alluring, miniature Wes Anderson movie? Is this the editorialized ‘Y2K’ aesthetic personified? The answer to both is a resounding yes. It is all blue skies, winged eyeliner, and surf rock riffs. Benjamin is a musically inclined long-lost Olsen twin down to her stylish New Yorker ways, ‘main character energy’ convertible rides from dawn to dusk, and cigarette in hand. Engrossing and charming, fresh and new, you can’t help but be sold on the elusive pop sensibilities of the song’s glittering hook and the video’s ode to beauty; whether that be the beauty in youth, the beauty in doing what is best for you, and the beauty in all that is around you (even in the most damned times internally and externally).

Benjamin, with her honeyed vocal tone and deliriously mesmerizing approach to folk rock harmonies, is the gift that keeps on giving. Her songs are witty but not overtly vengeful reality checks, making them the sweetest, easiest, and most relatable pills to swallow. Intimate in the truest, most ethereal of singer-songwriter ways (Think: Carly Simon, Norah Jones) with the captivating showmanship of some of the dreamiest young rockstars (Ie: Benee, Avril Lavigne), we are certain CRB is about to put herself on the map.

On this song and this forthcoming album, she exudes artistry in a self-assured fashion. Romance is on the horizon, and that’s always an entrancing, exploratory path to take for a musician, but the clever lyricism and easy breezy take on making said art feels all too effortless and truly innate. Her narratives are resounding, resilient, sometimes laughable, but emotionally real. In her own words, an exclusive for The Aquarian: “‘Louis’ is the oldest song on the album and the first song I ever recorded with this band so it’s very special to me. For the video my friends Giullian Gioiello and Zoe Zeeman rented a convertible mustang and drove around NYC on an unseasonably warm fall day. It was so fun.”

Dreamtina is far from the start for her – and “Louis” here, with its understated grooviness and TSwift-inspired introspective, sets the stage right before the curtain rises to showcase all of what this budding New York staple has to offer. You’ll relate and you’ll heal and you’ll dance and you’ll sing and you’ll feel warm and you’ll feel heard and you’ll become immersed in something bigger than yourself… but also wholly yourself. You’re, most importantly, transported into the homegrown loveliness and impassioned melodies of one indie singer-songwriter Charlotte Rose… and this is a place of simplicity, understanding, heart, and soul. Stay awhile – we plan on it.

DREAMTINA IS OUT ON FRIDAY WHEREVER YOU LISTEN TO MUSIC! FOR TICKET’S TO CHARLOTTE ROSE BENJAMIN’S SHOW THIS SUNDAY AT BABY’S ALL RIGHT, CLICK HERE!